The Power of Play-Action 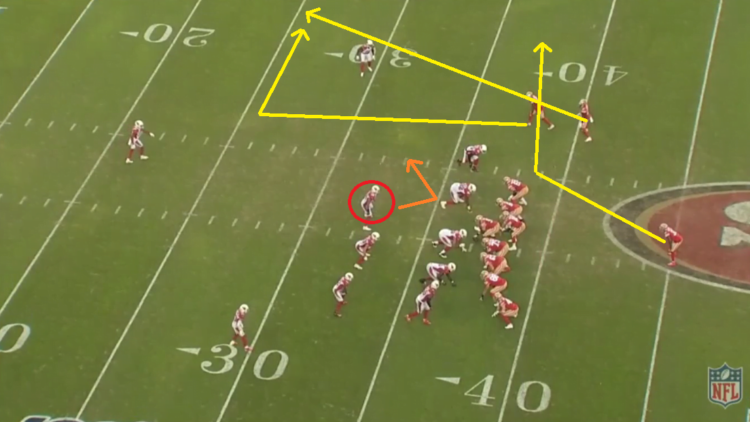 On a day when the 49ers ran the ball 18 times for 27 yards, Kyle Shanahan’s play action passing game was just as deadly as ever. Jimmy G was 11/12 and racked up 174 yards through the air off of play action. On top of that, he had a 16 yard TD pass to Ross Dwelley and 15 yard completion to Emmanuel Sanders both called back due to penalty. The only miss of the day was on a ball he air mailed to Kendrick Bourne in the red zone after the nullified Dwelley TD.

Play-action is one of my favorite things to do film breakdowns on because it often leaves gaping holes in the defense and allows for explosive plays. Kyle Shanahan did an exceptional job with his offensive scheme and setting up easy throws and reads throughout the day for Garoppolo, proving that the idea that you need to be able to run the ball consistently and effectively to set up play action just isn’t true. More and more teams are beginning to buy in to this line of thinking with the play action rate in the NFL in 2018 reaching 24% (Spratt, 2019). Even further, Football Outsiders found that “from 2011 to 2017, 196 of 224 team-seasons had higher yards per play on play-action dropbacks than on non-play-action dropbacks. This includes teams like the 2017 Lions (9.4 yards per play-action play, No. 30 in rushing DVOA) and 2015 Jaguars (1.7 more yards per play on play-action dropbacks despite being No. 28 in rushing DVOA and only running 31 percent of the time)” (Baldwin, 2018).

Case and point is the first play from scrimmage that the 49ers ran on Sunday. Without setting up the run, they ran play-action. A staple of the Shanahan offense is using his fullback Kyle Juszczyk or George Kittle to crunch across the formation and kick out the end in a split zone concept that allows for cutbacks in the run game and taking advantage of overflowing defenses. With the 49ers run game’s reputation and established tendencies, this leaves the window open for play action off of it pictured below.

As the play develops both the defensive end and corner feed up into the run game and allows Garoppolo to have his pick of Dwelley or Juszczyk. Ideally Garoppolo is able to see #33 crash on a hard run read and hit Dwelley behind him and in front of the deep middle safety. With Deebo Samuel running straight at the free safety, it creates a high low read against #33 on the playside. Deebo should be able to occupy the free safety and prevent him from getting over to the corner route by Dwelley. This play action flood concept aims to put the flat and deep third defender in conflict. If #33 stays deep under the corner by Dwelley, you can hit the 10 yard dig that’s coming from the backside or dump it down to Juszczyk in the flats. If he comes up, you can drop one over his head and in front of the FS occupied by the skinny post ran by Samuel. You’d like for Jimmy to keep his eyes up, see the crashing corner and throw with anticipation to lead Dwelley to the sideline for a chunk play to open the game but with pressure in his face, he takes the open Juszczyk in the flats for positive yards.

Shanahan does an amazing job of giving Garoppolo easy reads and setting him up for success by scheming guys open and allowing for easy completions. One of my favorite plays and a great call that catches the Cardinals in man coverage is a jet sweep play action screen. Shanahan puts in a pre-snap shift to help Garoppolo determine that the Cardinals are in man coverage. Likely, he has a play that he can kill to if the defense bumps over and shows zone coverage. As you can see below, with the rollout, the safety and middle zone defenders mirror over with the QB on the rollout, the playside corner #33 has to run with the dig by Deebo Samuel, and the crunch flat route by the RB pulls the LB in man coverage, leaving one guy defending the jet sweep player – Richie James Jr. The set-up of the play looks similar to a lot of Shanahan play action with boots, rollouts, and players coming across the formation into the QBs field of view. So how can you make them pay for only having one guy defending the sweep on that side of the field? Leak linemen out on a screen that way and set up four big guys to block one small guy. The execution is awesome and gives the defense one more thing to think about on pre-snap motion and during play action.

The beauty of play-action is that it can create simple reads and make them even easier. In the second half, the 49ers ran one of the most basic passing plays and one that is executed even at the high school level. Flood. A flood concept has three players running routes at three different levels all on the same side of the field so that the defender’s zones are overloaded and they can’t cover every route. Typically there is a flat route at 1-2 yards, a deep out at 10-12 yards, and a fade which clears out any deep zone player. While the first play of the game used a flood concept, they got there in a unique way with Dwelley leaking after faking a block and heading to the corner. This time with the pre-snap shifts, nobody follows which indicates zone. The corner is 8 yards off and the linebackers are over-shifted to protect against a two tight end set. The two tight ends stay in for pass pro and the Cardinals are left with three guys defending no releasing receivers and two guys defending three on the playside. The corner has to run with the fade and the LB responsible for the flats, #58, feeds into the play action and can’t get back under the deep out in time, allowing for an easy throw and catch and 13 yard gain.

Despite the lack of running game all day, play action still held linebackers, caused misdirection, and opened up easy passing lanes for Garoppolo and the 49ers. Play action passes accounted for 41% of Garoppolo’s passing yards and allowed the 49ers to get the Cardinals on their heels and climb their way back into a game in which they were down 16-0 early in the second quarter. Play-action passing is a hugely efficient play made even more deadly by Kyle Shanahan’s run game scheme and the ability for the 49ers to capitalize on undisciplined coverage. Look for them to continue to lean on it to create big plays and keep defenses honest throughout the rest of the season and into the playoffs.