Zone Read Made Easy – Brought to you by the Baltimore Ravens 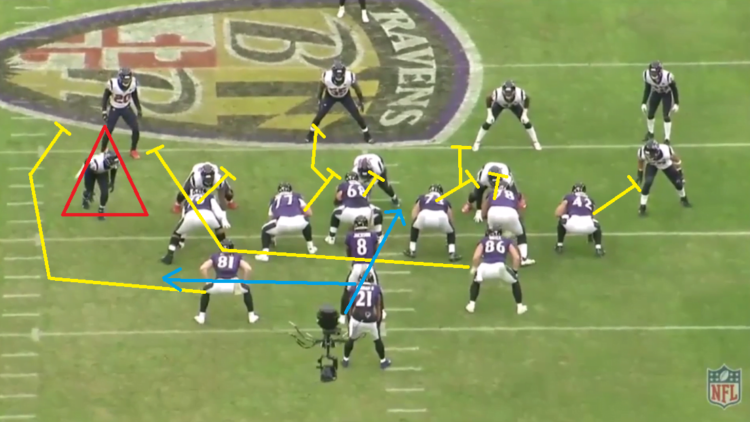 The Ravens have been putting on a clinic in the run game all year and it’s not even things that are incredibly fancy or intricate. It’s simple reads, good blocking, and a great job of making the defense pay for not being sound in their run fits and play disciplined defense with solid tackling. On Sunday the Ravens continued their rushing tear with 256 yards on the ground against the Texans. While the Houston defense has struggled on the back end, their rush defense is middle of the pack (ranked 13th overall giving up 101.3 yds/gm) and are no slouches with a couple legit defenders upfront.

The running threat that Lamar Jackson provides forces defenses to play honest and allows the Ravens to gain extra blockers and create explosive plays in the run game. While the zone read isn’t new to football, not many NFL teams run it because, well, not a lot of teams have Lamar Jackson. The speed of defenders and the tighter hashes in the NFL make it way more difficult to run the zone read effectively. Baltimore, however, uses it with lethal effectiveness. On 12 zone read plays on Sunday they gained 163 yards, a 13.5 yard average. Even without their three explosive plays of 25, 39, and 63, they still averaged a respectable, if not amazing, 4 yards a carry on zone read plays.

Zone read, at its simplest, is leaving a defender – usually a defensive end or OLB walked up on the line of scrimmage – unblocked. You leave this defender unblocked because the plan is to put them in conflict and whatever action they take will be the wrong one. Pictured, above, the red triangle is the unblocked man. If he squeezes down and turns his hips towards the sideline to tackle the RB on the inside zone dive, the QB can pull the ball out of the mesh and run outside and around the crashing unblocked defender. If he stays with his hips square to the QB or comes upfield on the otherhand, the QB simply hands the ball off and that player is no longer involved in the play. Meanwhile, the wing, #86, is taking an arc release to wall off any flowing linebackers in case the QB keeps the ball and runs to the outside.

As you can see below, the unblocked defender stays wide which tells the QB to hand the ball off. The offense has gained a man that normally would be used to block this unblocked defender and now #79, the left tackle, can help on the double team with the guard, create push to the second level, and wall off the flowing linebacker. Textbook blocking and climbing by the Ravens offensive line allows an easy 11 yard gain by Mark Ingram.

Below is another example of the zone read with a couple little wrinkles. There’s a lot of lines but what’s going on is that the Ravens understand that the Texans and #59 in particular, are respecting Lamar Jackson and QB keep. So, instead of blocking the read man to create more space in addition to the mesh and threat of a QB keep, they have the fullback take a crunch and kick-out motion like he’s going to hit the end and then feed upfield to get a block downfield since the unblocked man is already out of position to defend the give to the RB. The Jet sweep motion in yellow also adds an additional element that widens the defense to protect the outside and gets secondary help out of position for the inside run. The jet sweep then turns into an outside blocker to help seal any flowing defenders in case the QB decides to keep it and run outside. As it turns out, the safety roles with the jet motion, the unblocked man gets up field and out of position so as to prevent the QB keep, and the gained blocker in #79 helps double team the defensive tackle and work up to the LB and create an explosive play for the Ravens. All off of a simple zone read concept with window dressing.

Take a moment to look at our read man in the red getting up-field to protect against the QB keep, the safety flowing with the jet motion, and the hole it creates for the RB to run through.

Finally, below, Lamar Jackson decides to keep it. The read man actually does a great job of recovering and forcing Lamar to cut back inside towards his help. Unfortunately you can also see how strongly both the LBs bite on the inside run and get out of position. It even looks like the Ravens block this up incorrectly because they leave two guys unblocked. Both the defensive end and the defensive tackle on the offensive left are untouched. But because of the over-committed LBs being unable to flow over to help and Lamar Jackson being Lamar Jackson, it goes for a huge gain. Not many QBs can make people miss like this which is why he is such a threat and opens up so much space in their run game. Just the idea of Lamar taking off scares defenses and makes them over-protect any possible QB keep.

Note how hard the two middle linebackers flow to tackle #21 Mark Ingram because they have been handing it off all day. Even with #86 leading up the hole and blocking nobody and a missed block on the defensive tackle the play still goes for a huge gain because of the linebackers lack of ability to scrape and help make a tackle.

We’ll throw one last gif in that comes from the end of the game and goes for a 63 yard touchdown. The read man makes life super easy and gives a clear handoff read by coming way upfield to protect the QB keep. Everything works smoothly and it’s the easiest run all day. The running back does a great job pressing the hole and making the LBs commit inside before taking advantage of the cutback – one of the biggest boons of zone scheme running. Props to #80 Crockett Gilmore getting the scoring block downfield and turning this from a big gain into a touchdown.

The Ravens don’t do anything too fancy, they just run the zone read correctly and make teams with poor run fits or undisciplined ends pay for it with explosive cutbacks and QB keeps. Awesome to see concepts that are simple and done at all levels translated to the NFL with minimal window dressing but just executed at an elite level. The Baltimore run game is on a historic pace and one of the hardest offenses to scheme against and stop. The way things are clicking, it’s starting to make you wonder who can stop them from running all the way to a Lombardi Trophy.

For even more football talk check out our podcast Weekly Spiral on Spotify and go ahead If you liked this post make sure to subscribe here and let us know what you think. If you feel like donating to help us keep things running, you can visit our Patreon page here. Make sure to follow us on Instagram @weekly_spiral and twitter @weeklyspiral for updates when we post and release our podcasts and blog. You can find the Weekly Spiral podcast on Spotify or anywhere you listen.