Opening Scripts and Exploiting the Defense 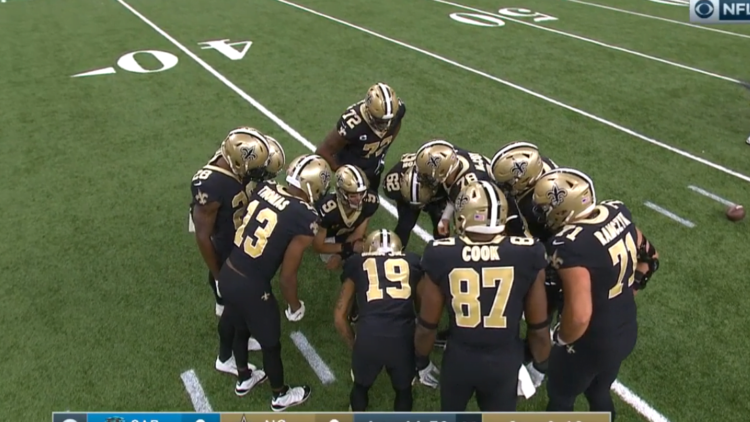 Seven plays, 75 yards, 4:21 off the clock, and 7 points. The Saints’ first opening drive touchdown of the year did a great job attacking the weakness of a defense and stacking plays that look different but are the same basic concepts.

Play-callers often come into games with a set script for their first drive. Usually it builds in different formations, personnel, and looks to 1. See how the defense adjusts and reacts to, 2. Attack weakness in the defense, 3. Show plays that will be built on later that look similar but that are different, and 4. Potentially catch the defense in a sub package of players that they feel like they can exploit on that drive. This set script can range anywhere from five to 15 plays that coordinators want to run at the beginning of the game to get their playmakers involved and test the defense.

Data shows that if you have no explosive plays in a drive (16+ yard pass or 12+ yards on a run), you have a 9% chance of scoring. If you have one explosive play that scoring probability goes to 49% and if you have two explosives, it goes up to 77% (Maddox & Slack, 2011). The Saints had two in their opening drive including the 26 yard TD run by Murray.

The best way to get explosives is by scheming up plays for your best players. The Saints started off doing just that. Murray, Thomas, and Kamara each had two touches on the drive and Tedd Ginn had a 30 yard gain on a scramble drill from Brees. What capped the drive is how they started with their first play though. The Saints came out in heavy personnel to try and force the Panthers to match with big bodies, something the Panthers are thin on with an already porous run defense.

The opening play featured a personnel group with three tight-end types and one running back – Latavius Murray. The Saints crunch their H, #86 across the formation in the hopes that it pulls a LB out of position and causes a loss of gap integrity. Instead, Luke Kuechly and the linebackers bump over, fill perfectly, and cause Murray to bounce right into a gap filled by Eric Reid (#25). The center and right guard are occupied by the defensive tackle #95 Dontari Poe and can’t climb to get an extra block. You’ll still take your RB in a hole on a safety any day though and Murray falls forward for three yards. You can see the blocking scheme and the tracks and fits of the LBs in the image below.

Take a look at the great job of the Panthers linebackers all being assignment-sound and fitting perfectly in their gaps. Great team football. Murray makes a decisive cut and falls forward for what he can when he meets Eric Reid in the hole.

After going spread and hitting a short completion on a shallow crosser to Michael Thomas, the Saints are set up with 3rd and 3.

They dial up a pretty simple high / low concept with their two best players on the same side of the field Kamara (#41) takes a wider split in the backfield to enable an easier release and Michael Thomas (#13) is split to the single receiver side. With both of them on the same side and only three players on defense to guard them, one of them will be singled up and open a window for the other. With a pre-snap motion and no man follow, Brees knows that the Panthers are in cover two with two outside leverage corners up close to the line of scrimmage and two deep safeties. Now all Brees has to do is read #23 (the red triangle), the nickel corner over Kamara. If he comes up on Kamara’s hitch pattern right at the line to gain, he can throw the post behind him to Thomas. If #23 drops under the post, he can throw the sit for the first down. Super easy concept and read which was helped to diagnose with the pre-snap motion.

Not the easiest catch, but watch the space it creates for Thomas when #23 comes down on Kamara to play the sticks.

Following their first down, they give it to Kamara for a 5 yard run. While the next play goes for 30 yards on a scramble drill, it also might be concerning for Saints fans. The Saints go with a two-back set and split Kamara #41 out wide hoping for a mismatch. The Panthers, however, are in nickel with an extra defensive back on the field to guard against exactly this type of thing. Kamara demands too much respect as a receiver to put a linebacker on him but this also lightens the box and makes it easier for the Saints to run. A double edged sword. The Saints use a short motion to try and create some leverage for Kamara on a corner-fade while sending Ted Ginn on a skinny post down the middle of the field right at #25 Eric Reid at safety. Ted Ginn does a great job of stemming his route outside and forcing Reid to turn his hips to the sideline to prevent against a fade. He then snaps it off to run a post and there’s absolutely nobody in the middle of the field with #33 the other FS coming down on the intermediate dig route. Drew Brees is looking right at him… and doesn’t throw it. It’s as wide open as you get in the NFL, he has a clean pocket, and all he has to do is throw it out down the opposing hash and let Ginn run under it. You can see in both the sideline and end-zone views that Brees is looking at him. Concerns about Brees’ arm strength have been a concern as he has gotten older and the Saints are only attempting about three deep passes a game which might make you wonder if Brees trusts his arm on deep throws anymore (Player Profiler, 2019). Despite the miss on the read throw to the post, Brees moves out of the pocket, Ginn works back towards the ball and they connect on the sideline for a 30 yard gain.

Watch Eric Reid, the Safety at the bottom and how Ginn forces him to flip his hips and wins the middle of the field.

On the scoring play they go back to heavy personnel and actually bring in an extra lineman in addition to two tight-ends and a running back (Murray) but are essentially in the same formation. A couple plays earlier, Dontari Poe, who helped blow up the first play and hold a double team, game off with an injury. Wouldn’t you know it, the Panthers lined up exactly the same as they did on the first play of the game when faced with heavy personnel and wouldn’t you know it, the Saints ran essentially the same play right at McCoy’s replacement. This time, with a little window dressing, a shift, the right guard and right tackle win their double team and drive their man into Kuechly (#59) who reads the fullback and goes to fill the wrong gap. As a result, he can’t scrape over the double team and the cutback lane opens up. Murray reads the hole, cuts off his guards back, and explodes into the open field for a touchdown.

Watch Kuechly #59 at MLB move to the right to attack the FB and designed gap for the play. Not sound defense though. #54 is already there to fill and with Kuechly out of position, it opens up a hole for Murray.

While nothing world-beating or terribly innovative, the Saints opening drive exploited every weakness it could find in the Panthers defense. As soon as a backup came in, they attacked, they overloaded one side of the field with two of their best players, they threw different formations and personnel at them, and they called plays to get the ball in their best players’ hands. All resulting in an opening drive TD for the Saints and a perfect a start to a division game as you can hope for.

you liked this post make sure to subscribe here and let us know what you think. Make sure to follow us on Instagram @weekly_spiral and twitter @weeklyspiral for updates when we post and release our podcasts. You can find the Weekly Spiral podcast on Spotify or anywhere you listen. If you feel like donating to help us keep things running, you can visit our Patreon page here.