QB Breakdown – Lamar Jackson, his Mechanics, and his Decision-Making 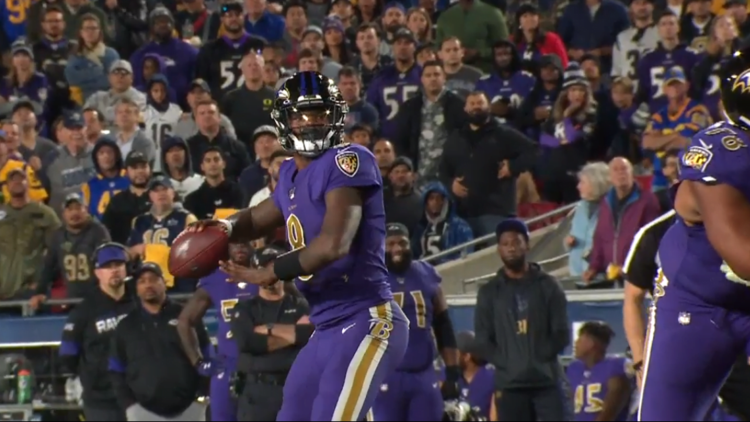 A 75% completion percentage, 169 passing yards, five passing touchdowns, and how about we toss in eight carries for 95 yards on the ground too. Lamar Jackson has begun to run away in the MVP race with his week 12 performance. With 2,427 yards and 24 touchdowns through the air and 876 yards and 6 touchdowns on the ground, Lamar Jackson is doing things we’ve never seen a quarterback do. There’s a lot to love – including decision making mechanics being greatly improved over last season.

Given his explosion on Monday Night Football against the LA Rams, let’s look at that game and break down his play purely as a thrower of the ball. We’ll use the same grading scale I use for the quarterbacks I coach at Tamalpais since it gives a concise look at how a quarterback is performing in all phases of passing. On each play the QB is graded on their Drop Technique, Throw Technique, and their Decision. Each one of these is given a 0 or a 1 on each play. You either did them correctly and made the right decision, or you didn’t. The grades are then summed with a maximum grade being a three. Here is Lamar’s grades for the game and then we’ll go into detail on his mechanics, what he needs to work on, and what he did well.

It’s hard to know exactly what he’s being coached to do as far as footwork and decision making but I tried to stay as true to form as possible and only grade him down for things that are clearly un-coached and not proper technique. I also give QBs completions for dropped passes, and interceptions for dropped interceptions. Lamar’s receivers had 3 drops on the night. His other two passes were throw-aways. When he threw the ball to a receiver he completed 100% of his throws and every pass should have been caught by an NFL receiver. We can nitpick ball placement but at the end of the day, he delivered catchable balls and did an exceptional job of leading the pass game through his decision making.

Let’s start with his drop technique. The first thing I noticed with his drops is that they’re inconsistent. A lot of the time he’s using a skip drop. He may be coached to do this since he does it frequently, but I don’t like it for a number of reasons and haven’t seen the technique coached before. 1. It’s inconsistent as far as depth and timing for hitting receivers in rhythm and having a consistent feel for the pocket, 2. It gets both his feet off the ground at the same time which is a huge issue if you have to throw hot or out of rhythm. You always want at least one foot on the ground to be able to move and drive the ball. 3. It can cause vertical bounce and inaccuracy. With vertical bounce, your whole body is moving up and down. This can lead to vertical inaccuracy if you throw on an up bounce or on the way down. It’s one more variable for you to compensate for with your release point. You want to be as even as possible to maximize your consistency as a thrower.

In the gifs below, take a look at how much you can see his hips, and helmet move vertically up and down. Like we talked about, we want to minimize that as much as possible. You can see in the last gif where he skips and then takes a 3-step after, he’s much more even and stable.

Having a pure crossover 3-step drop matches timing of receivers routes, minimizes bounce, and is way easier to perform more consistently on a snap-to-snap basis. While utilizing the skip drops didn’t impact him too materially, it could lead to issues down the road. When he did use a 3-step drop a couple times his base got a little wide at the top of his drop. This can again create issues in his vertical accuracy. His back plant leg is extended too far which causes his whole body to dip. When your hips and head dip significantly like this, it can cause you to air mail throws because there’s one more variable to account for when throwing the ball as you are now rising up as you throw – just like with the skip drop. Again, take a look at the picture and then the gif to see how much his hips and head drop as his back leg plants in the ground at the top of his drop.

On the whole though, his base was exceptional. He kept his feet slightly outside his shoulders, had very little heel click (another causer of vertical inaccuracy) on his hitches, and had exceptional pocket presence. He clearly worked on his base over the offseason and it has really paid off. A good base sets the table for good throw mechanics, power, and accuracy.

As far as his throw technique is concerned, he is much more consistent here than he is with his drops. His only issue tends to be with pointing his toe where he wants the ball to go. Twice he threw behind his receivers or to their back hip because his toe was pointed behind them instead of putting the ball out in front and allowing easier catches or more yard after catch. Having your toe pointed in the wrong spot can mess with your hips and follow through. Generally you finish your follow through with the bulk of your weight solidly over your front foot. So if your foot and leg are pointed away from your receiver – or behind the receiver in these cases – it can cause the ball to travel that direction since your momentum and throwing action will end up pulling it that way. It’s not a necessity on every throw but it helps create consistent ball placement. You can see in the picture and gif where his toe is pointing is where the ball ends up going. The green arrow indicates where he should be pointing to lead his receiver to space and allow for an easier catch.

That being said, every one of his other throws had great technique. He had great hip whip to generate power and consistency, generally good follow through, a high elbow, and pretty quick release. One of the off platform or alternate angle throws he made was pretty insane. You can check it out below. He has good patience, has to adjust his angle, and delivers a perfect ball.

Lastly, we’ll go over a couple of his reads and decisions. He did a great job all night and diced up the Rams secondary. He did an awesome job reading cover 0 and attacking the leverage of #26 on a four verticals play in the red zone. It showed a great understanding of how to deal with an all-out blitz and where to attack if that happened. You can see #26 with outside leverage which is an enormous no-no for man. ALWAYS, always, always inside shade to force the QB to make a longer throw to the outside. This is too easy and Lamar quickly sees the leverage that Snead #83 has on an inside seam pre-snap. Snead immediately beats #26 who does some kind of shuffle off the snap and Lamar throws a strike in rhythm for a touchdown.

The last play I’ll show you is one of Lamar getting off his first and second read before hitting his third read, Mark Andrews, over the middle for a huge catch and run of 38 yards. The Rams are showing two high safeties pre-snap and pressure in the A gap but they roll into cover three as Lamar hikes the ball and the linebackers bail into coverage. He immediately looks to the top of the field to see if his man can win on the fade. When the corner stacks on top, he comes down to the two rub routes – something the Ravens ran a lot this game. When he sees the linebackers sitting in the flats and staying shallow looking at the underneath routes, he knows that there will be a window behind them on the deep dig, hitches and delivers a dart in a small window between the linebackers that allows for Andrews to make an easy catch and run.

You can see everything we talked about previously here. He takes a skip drop into a 3-step, is a little wide at the top of his base creating some vertical bounce but collects himself on the hitch. There’s a little heel click but he then keeps his base wide, leads his throw with his hips, points his toe, and delivers a strike after coming off his first two reads. A little bit of everything on this play – the good and bad.

Lamar can clean up his footwork but other than that, he’s a pretty polished thrower of the ball. Most impressively, he is making excellent decisions. He’s able to read post-snap changes in coverage, exploit leverage, understand hot routes, and deliver the ball to exploit the weaknesses he sees. He has the arm talent and athletic ability to overcome some inconsistency in his drops but as he fixes those, he will only become more consistent as a passer. Something nobody in the NFL except the Ravens wants to see.