The Scramble Drill and How it Helps the Bills Win Games 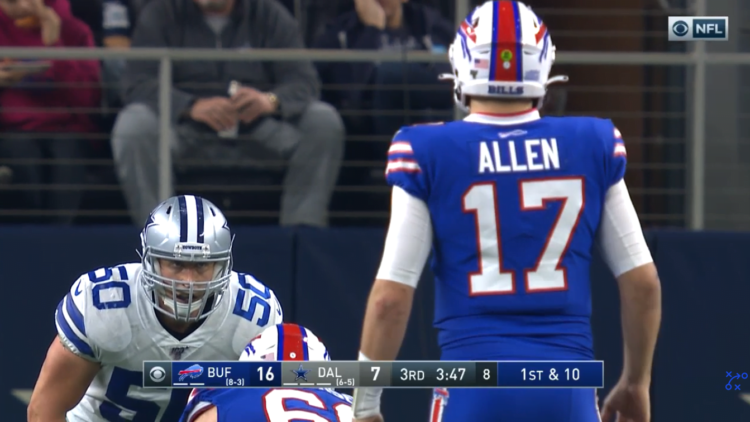 The Bills are 9-3 and have all but clinched a playoff berth so it’s time to check out how they killed the Cowboys on Thanksgiving with the scramble drill and how it is allowing Josh Allen to maximize his talents. Josh Allen is an exceptional athlete and has surprising accuracy and a big arm while on the run. His ability to extend plays puts a stretch on the defense especially with his ability to run the ball. The Bills gashed the cowboys multiple times for 107 total yards and two touchdowns on scramble drills during their game on Thanksgiving, accounting for 30% of their total yards and 2/3 of their touchdowns.

Every team has their own set of rules for the scramble drill but generally they are all pretty similar. In the case of the quarterback escaping the pocket, the deepest receiver to the side of the QB will sprint to the back corner of the end zone. Generally everyone else will stay at their depth or find pockets in the defense if they are in zone while turning to mirror the quarterback. The shallowest receiver should run to the sideline and settle beyond the first down, the deepest receiver away from the scramble will aim for the back goalpost, any mid-level players will cross the field at their depth and get in front of the quarterback. All receivers must be prepared to block if the quarterback scrambles.

This an actual drill that teams practice during the week. Especially when you have a quarterback like Josh Allen who extends plays, it’s important for all the receivers to be on the same page as far as what to do when he gets out of the pocket. We’ll look today at some of the route adjustments, how it killed the Cowboys, and the power of a mobile quarterback.

Josh Allen loves to climb up and out of the pocket and has really good awareness of where the outside rush is coming from. His tackles do a good job of washing pass rushers up and away from him, allowing him to climb and keep his eyes downfield. This puts the linebackers in extreme conflict. Especially in zone they now are faced with either coming up to tackle Allen who is a threat to run the ball and thus vacate their zone, or stay back and allow for Allen to scramble. Allen does a great job of stringing linebackers out and making them decide. As soon as they creep forward or get lost in coverage, he’ll hit a receiver behind them for a big gain on a scramble drill. When Allen does have trouble though, like most quarterbacks, is when he’s faced with interior pressure. Since he likes to climb up into the pocket, a wide outside rush can push him right into defensive tackles when he moves forwards. The Cowboys got him a couple times with this by blitzing off the edge and forcing Allen to climb into more pressure. Despite the Cowboys registering four sacks, a lot of the breakdowns in protection game from the tight ends or running backs. The Bills offensive line did a great job of allowing time for Allen all day and without blitzes, the Cowboys really struggled to contain him in the pocket or rush his throws.

On his first sack of the day, the offensive line does a great job of going big on big and protecting against the front 4. The issue in protection came from Montgomery, the running back who was late in his scan to get over to get a piece of #23, the nickel corner who came on a blitz. You can see staggered feet by #23 which usually is an indicator that a defender may be blitzing. Montgomery checks the guy over him for any blitz threat and then scans to his left but is just too slow and Allen, a little late to diagnose the blitz, has to eat the ball with a free rusher on him by the top of his drop. None of the receivers help him out by looking hot either. Especially #88 the H-back who runs right by the slot blitz. You’d like to see him at least chip on his way out or be ready for the ball more quickly and make himself available. As it is, nobody uncovers by the time pressure is on Josh Allen and he eats the sack. This is the best way to stop Allen from scrambling. Force him up in the pocket with nowhere to escape to or confuse him with his protection and hot route calls.

On his first scramble drill throw, Allen climbs up and out of the pocket to his right.  The Cowboys attempt to contain Allen but do a poor job of being disciplined in their rush lanes. This opens up a huge pocket for Allen who calmly climbs up and keeps his eyes downfield. Beasley continues his route flat across the field like discussed in the rules above and snags a dart for a 29 yard gain. As you can see below, the ends get way up-field and the inside rush is non-existent. Ideally you want your pass rush to close in and be gap-sound with players in each of the red circles below so that Allen has no space to move up and out of the pocket. Instead, the tackles run into each other, and the ends get washed up-field allowing Allen to climb up into the pocket.

You can see illustrated below the paths of the initial routes in yellow and then the adjustments the receivers make on the scramble drill in orange as Allen climbs up and out to his right. The Cowboys are in cover 1 which means they are in man coverage underneath with one deep safety. Jaylon Smith #54 is spying Allen in case he tries to scramble as man coverage is a perfect opportunity for quarterback runs since all the defensive backs are running with their receivers and don’t have eyes on the quarterback. #19 of the Bills at the top of the screen actually wins his route immediately and Allen is looking at that side of the field. He has an opportunity to hit him on the run for a big gain but didn’t pull the trigger. As it is, the Bills continued to work to get uncovered while getting into view of Allen and separating in man coverage.

On his second pass to Cole Beasley, Dallas is running a man / zone combo coverage, something that they love to do. To the bottom of the image and short side of the field they are running man coverage and to the wide side of the field they are running cover 3. Regular cover 3 is run to the top of the screen with the OLB going to the flats and corner carrying deep third. You can see below the coverage responsibilities of all the defensive players and the routes and adjustments of the Buffalo players. Dallas has good initial coverage until Allen begins to climb out of the pocket. Jaylon Smith is stuck looking right at him and loses the feel of where Beasley is. Beasley #10 shifts over towards the middle of the field to find the soft spot in the zone and settles down to give Allen a target (versus in man where you continue to run hard instead of settling down). The safety takes a bad angle and 25 yards later, the Bills have a touchdown.

On Allen’s scramble for a touchdown he once again climbs up and out to his right (notice a trend here?), sees that the corner is running with #26 Montgomery in man and takes off. Dallas is once again in one of their man / zone combo coverages on defense and this time Allen scrambles to the man side. As we talked about earlier, when a defense is in man, it’s really difficult for them to prevent quarterback scrambles because their backs are all turned and they don’t have eyes on the QB. Allen initially looks to his left which pulls both the linebackers and the safety to that side and out of position. The corners to the man side (the short side of the field and bottom of the picture) are running with their receivers and are out of position to make a play on a quarterback scramble. John Brown #15 does an awesome job with a scoring block on #25 to allow Allen to get into the end-zone. His scramble drill is perfect. He breaks off his route in man coverage and works hard back to the quarterback to give him a window. When he realizes that Allen is going to run, he turns and finds a block. The only one able to make a tackle is Sean Lee #50 and with Allen’s speed and power, he beats him to the end zone and Lee can’t make the tackle. Josh Allen climbing up and out of the pocket is all over tape and despite the Cowboys strategy of rushing 5 to try and keep him contained, that doesn’t work if the pass rush lanes are undisciplined and your two tackles are getting mauled upfront with no pressure.

You can see from the endzone view below the impact that Allen’s eyes have on Sean Lee #50 and how the defensive backs to the right side are running with their man in coverage. Also keep an eye on #15 John Brown working to uncover and getting on a block.

On the last scramble drill of the day, the Cowboys run an end-tackle stunt and where #90 loops around to the inside but ends up getting washed way inside, the guard doesn’t spike out, and it opens an easy escape route for Allen out of the pocket. #16 Foster does a great job of breaking off his route to mirror the quarterback while staying flat and giving Allen an outlet. Allen threads the needle and moves the chains on 3rd and 4 with a 20 yard gain.

Mobile quarterbacks like Josh Allen are incredibly difficult to defend against for defenses and when the pass rush is undisciplined, Allen is talented enough to make them pay for it with his escapability. This year he’s taken a real jump in keeping his eyes downfield and making really accurate passes on the run that allow for huge chunk yardage and explosive plays. It’s a huge part of the Bills offensive success and has the Bills sitting at 9-3, prepping for playoff football, and a real shot at taking the AFC East division title from the Patriots if they can win out.