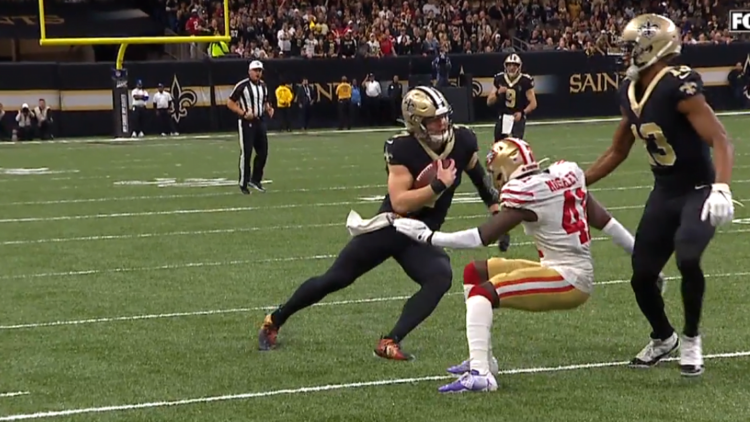 While the Saints may have lost in heartbreaking fashion on Sunday to the 49ers, Sean Payton continues to get the most out of the Swiss army knife that is Taysom Hill. Similar to Lamar Jackson, we haven’t seen a player filling this kind of role in the NFL before. Taysom has 21 rushes for 140 yards, 14 receptions for 126 yards, 5 total touchdowns, and is 2/4 for 35 passing yards through week 14. That’s an average of 3 touches and 2.3 points a game. He averages 7.7 yards per touch and continually makes impactful plays. He adds a dynamic that teams have to spend time preparing for and while his package may be relatively small, he is usually excellent at executing it and making the right decision. You can call it a gadget or a gimmick, but if it works, why stop doing it? Let’s take a look at some of the things that the Saints ask of Taysom Hill and how he can be so effective with the touches he gets.

In looking at the last five games of Taysom Hill, some trends popped up. The Saints used him on the goal line or on 3rd and short eight separate times out of his 23 total touches. That’s 34.7% of the time. On those short yardage or goal line situations, Taysom ran the ball 83.3% of the time, was at QB 50% of the time, and when he was at QB in these situations, they ran QB sweep with motion or run action from Kamara 100% of the time. So if you see the Saints in 3rd and short, Taysom Hill is at QB, and Kamara motions – it’s going to be QB sweep. The Ravens do a very similar play with Lamar Jackson and it’s surprisingly effective for both teams despite its simplicity. Taysom is 3/4 on conversions when running the QB sweep in short yardage. The Saints window dress the sweep with motions but it’s always the same basic concept. There’s almost always a WR or TE tight to the line and they use them to pin the end while wrapping the playside tackle around this down-block to get up to the next level. This helps seal the outside on what would be a pretty challenging block for the tackle and gets one of your big guys up to a LB or DB.

You can see below it’s a basic outside zone scheme with a pin and pull from the WR and right tackle. This creates enough of a lane for Hill to get up and through to gain 3 yards on 3rd and 2.

To make the play more effective and look different, they’ll motion towards playside, away, and change up formations, but it’s all the same concept. Check out a couple of the times they ran it against Tampa Bay, Atlanta, and San Francisco. All the same pin and pull action and basic concept and all effective. When Taysom also has the ability to throw it – although he does so rarely — it makes the secondary less aggressive towards the ball.

The Saints also like to run the jet sweep with Taysom in short yardage situations. There are a couple reasons to like this. Usually – especially on the goal line – linebackers are going to be tighter to the line of scrimmage and less able to scrape over the top to prevent an outside run. If you can sustain your blocks on the outside, it can be a really effective short yardage play. You also increase the likelihood that you will see man coverage in goal line situations and you can sometimes get a man advantage with the motion and force the defense to communicate on a quick hitting play. If the defense doesn’t bump with motion, they’re then out of position to make a play on the ball.

You can see the differences in the gifs below in how the Falcons and 49ers defend the same play. Generally I prefer the jet push pass because it’s faster hitting and eliminates slowing down during the mesh for the handoff. The Saints have been using Kamara as a decoy a lot since he started to get banged up earlier in the year and continued that trend on their two point attempt early in the game against the 49ers. The jet sweep from under center allows for a harder run sell to Kamara, hopefully keeping the LBs and safety home until Hill has an angle to the endzone. Versus the Falcons they use their same pin and pull technique with the WR and tackle to help create a hole. Versus the 49ers, however, there’s no pin and pull, #71 Ramczyk whiffs and blocks nobody, and with a bump from the LBs on motion, the Saints are now the ones outnumbered on the play 3 to 2 on the playside.

First watch the sweep against the Falcons and notice the pin and pull from the WR and #71 Ramcyzk and the lack of flow from the defense on motion.

Compare this now to the 49ers who flow with motion while keeping their other two LBs home for Kamara and how #71, the right tackle, this time is rendered useless with a missed block and the TE #89 Hill is left to block two defenders.

The third most common play run with Taysom Hill is a crunch flat play action. Coincidentally, the 49ers run this a lot with their fullbacks and tight ends. You can check out the 49ers play-action game and use of full backs and tight ends in one of our first posts here. The Saints ran this same play against the Falcons and 49ers in back-to-back weeks and both went for 9+ yard gains. Taysom Hill lines up outside the offensive tackle away from the play and comes across the formation on the snap of the ball. Drew Brees fakes the handoff to Alvin Kamara and boots out to hit Taysom in the flat with absolutely nobody around him both times. It’s really effective and the Niners probably know that more than anybody. As good as the Niners were at knowing what was coming on the 2 point conversion attempt, they were totally lost on this play-action crunch flat to start the game. In fact, the Saints ran a lot of the same plays with Taysom Hill against the 49ers that they ran against the Falcons just the week prior. It’s surprising there weren’t any wrinkles, tendency breakers, or counters to these plays they’ve been running with Hill and setting up all year. I’m sure they’re in the playbook somewhere – maybe to be pulled out in a playoff game down the road.

Take a look at the effectiveness and similarities in both these crunch flat plays versus the Falcons and 49ers.

It’s clear the Saints don’t have a huge amount of faith in Taysom Hill as a passer. They limit his attempts and generally give him very simple reads and if the throw isn’t there, tell him to take off. Just in the last five games he’s had trouble identifying blitzes, making decisive reads, and making teams pay through the air. While Sean Payton talks very highly of Taysom Hill it’s clear that if they believed in him that much, he would’ve been taking the quarterback reps when Drew Brees was down instead of Teddy Bridgewater. Taysom’s run game ability is impressive – especially for a quarterback, but while he has a big arm, he’s not ready to make NFL reads and hasn’t evolved to be an every-down NFL ready passer.

Perhaps the package will grow but there are definitely bread and butter plays that the Saints run with Taysom Hill. While not terribly inventive, they are continually effective especially in short yardage. They’ve thrown in a couple zone reads, a reverse pass, as well as throwing him a number of quick flash screens on the outside. He’s being used on special teams and has lined up at QB, slot, H, running back, and out wide. Definitely a dynamic player and one you have to identify wherever he is on the field. He forces teams to do extra preparation and with the motions, run action, and threat of the pass, can make it hard for defenses to stay honest and defend against the threats he poses. The use of Kamara with him is particularly effective because of the eyes that both those players draw from the defense. It can create confusion and communication errors and open up big plays that Taysom Hill is athletic enough to exploit. The Swiss Army Knife might only have shown a couple of the tools available but you never know when a new gadget might pop out at just the right time in a big game.

If you liked this post make sure to subscribe here and let us know what you think. Make sure to follow us on Instagram @weekly_spiral and twitter @weeklyspiral for updates when we post and release our podcasts. You can find the Weekly Spiral podcast on Spotify or anywhere you listen. If you enjoyed the content and feel inclined to donate to help us keep things running, you can become a Patreon here.