Trick Play Frenzy in the NFL 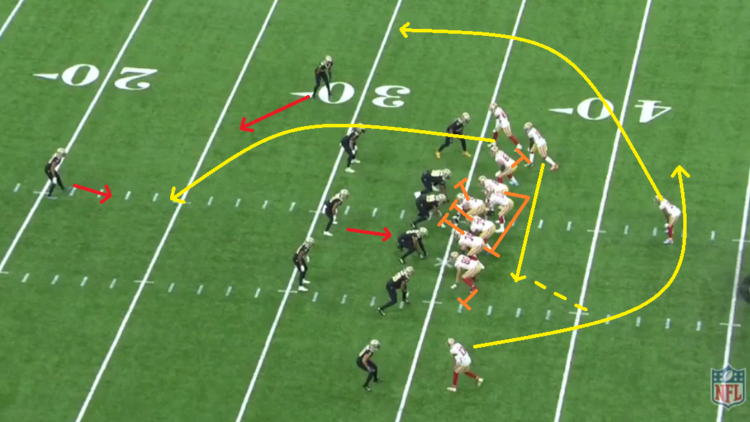 Philly Special, Flea Flicker, Reverse, Reverse Pass, the options are endless. Teams are dialing up the trick plays in this 2019 season and gaining big chunks of yardage. Sometimes they’ll even run two in the same game like the Patriots did against the Chiefs on December 8th. They can kick-start an offense, get the defense thinking, and lead to points in critical (or non-critical) drives. The time to pull out a special isn’t at the end of a game or when you’re down big. The most effective time to break them out is in tight games or in atypical situations. Turning a two touchdown lead into a knockout 3 score game with a little razzle dazzle can be exactly what your team needs. When you think of the risk vs reward, you might start to wonder why more offensive coordinators aren’t dialing it up and inventing new gimmicks and gadgets every week. A loss of 10 yards, an incompletion, or a turnover can happen on any play. Why not go for the trick play and potential explosive touchdown while you’re at it? Let’s dive into a few trick plays from this year, when they were used, and why they were so effective.

We’ll start with the Bills’ reverse pass against the Cowboys on Thanksgiving because guess what? The 49ers ran the exact same play down to the pass pro two weeks later against the Saints and both scored a touchdown. Both teams ran the reverse pass on first and 10, inside their opponent’s 40 yard line, late in the second quarter. Both teams started out in a tight trips bunch formation before shifting one receiver out to the left.

This can help bring the defenses eyes towards that side of the field especially with the ensuing jet sweep action off the snap. What helps sell the sweep even more is the pulling right guard. Linebackers keying the guards for runs, will flow that direction because they usually indicate what direction the play is heading. So now you’re showing a pre-snap shift, run action, and a pulling guard to the left. It’d be hard for any linebackers to resist all the indicators in front of them and not come down on the outside run to the left. In both cases, linebackers come up on the initial sweep to the left. On the 49ers’ play, the guard actually misses the linebacker who he is supposed to pick up in pass pro which makes the throw much harder for Emmanuel Sanders.

The remaining receiver on the right that is on the line of scrimmage runs a deep dig route in front of the corner and safety. With no remaining receivers on that side, the corners carry the dig inside towards the safety and leave their 1/3 of the field wide open. The running backs don’t even sell run. They just go straight down the sideline and nobody is left to pick them up. The reverse man bubbles behind, gets the pitch and throws to the wide open running back downfield.

It truly is a copycat league but it wasn’t Emmanuel Sanders’ first touchdown throw. He threw a very similar one just last year against the Cardinals in 2018.

Next we’ll move on to an oldie by a goodie. The Flea Flicker. The Patriots just ran one against the Chiefs for a touchdown and the true hero of the play was Julian Edelman and the way he sold run. They also did some cool stuff on the pass protection – something the Giants were unable to do against the Eagles — which we’ll get into a little bit. The Patriots ran this one in the first quarter on the first drive of the game. Love to see the aggressiveness of using a trick play early (even if it’s only to help a stagnant Patriots offense).

The Patriots line up with a single back deep behind Brady who is under center and run what looks to be outside zone. The lineman all take outside zone steps but the center then peels off to help protect Brady’s backside once he helps the guard secure the block. Something I haven’t seen before on a trick play like this. It helps create a ton of flow from the defense, creates a moving pocket for the quarterback and worked really well as far as keeping Brady clean.

What really sells the play though is the way Edelman #11 uses his eyes. In the endzone view you can see he slow plays like he’s blocking and first looks at the safety which pulls in the corner on his run read, then looks at the corner which tells the safety he is looking to block the most dangerous man (now the corner since the corner is closer) and as a result starts to come down for his run read. As soon as they both commit, he takes off. A really cool little nuance and just another indicator of why the Patriots have been so successful. Great attention to detail. Take a look and watch Edelman’s (#11) helmet as he looks at the linebacker and safety.

The pocket is clean for Brady with the help of the center who peels off and he delivers the ball to a wide open Edelman for a touchdown. Brady could have scooted a little more to his right to make it an easier throw. Obviously you don’t want to underthrow this one when defenders are trying to catch up, but, the ball gets there and Edelman is able to get in for the touchdown.

Compare this quickly to the Giants attempt at a flea flicker against the Eagles. The Eagles DBs have been torched all year, many are in and out of the lineup, and they frequently bite on double moves and get beaten over the top for big plays. This time is no different than any other pass play against them. It’s 3rd and 14, the Giants are up by 7 and they’re going for the kill shot. I don’t love the down and distance call for this, but I do like going for the jugular and putting the game out of reach for a stagnant Eagles offense at the time. As soon as the secondary sees run, they come up and leave Golden Tate wide open down the middle of the field. Unfortunately for the Giants they can’t protect against a 3-man rush, Nate Solder gets beat, and there is a defender in Eli Manning’s lap once he gets the flip back from Saquon Barkley. The Giants triple team the nose tackle and leave their two offensive tackles on an island. They couldn’t hold up and it killed the play.

We’ll finish up with the Patriots again early in the 3rd quarter down 9-10 against the Eagles on 3rd and 12 with the ball on the +15 when they did a double pass to Edelman who is faking a bubble and then throws to Dorsett dragging across the field. An awesome wrinkle that the Patriots ran was setting up a failsafe for Edelman #11 – a throwback screen to James White #28. While the play is developing, the offensive line drifts to the left as does James White. If Edelman doesn’t like the throw to Dorsett #13, he can come back and hit James White #28 who now has 4 offensive lineman in front of him on the numbers. Again, taking advantage of an over-aggressive Philly secondary, the deep crosser by Dorsett #13 is open because the playside safety flies up to the bubble and it makes an easy throw for Edelman.

In the endzone view you can really see how the lineman start to shift to the right of the screen after making their initial blocks. Since the ball is thrown out wide to Edelman they are clear to leave the original pocket where they now have nothing to protect and migrate to the other side of the field

I’m loving the appearance of more and more frequent trick plays in the NFL. It forces the defense to cover every single receiver at all times and if they don’t, you can hit a big play on them. It forces players to think and makes them less aggressive and you can then exploit this on your more routine plays. Ideally your trick plays score because you usually won’t use them twice unless you have a counter to it or a wrinkle off of your original one. Plus territory or from the 40 and in is perfect. The defense is fighting to keep you out of field goal range and they can become more aggressive and open themselves up to big plays. Specials can provide an excellent spark to a stalling offense, a knockout blow to an opponent, and a way to slow down a defense. They’re perfect for early game drives to help separate or climb back in and I like them a lot more when they aren’t desperation plays. If you see a chance for it, take the shot. I can’t wait to see what’s in the bag of tricks on the home stretch of the regular season and into the playoffs.