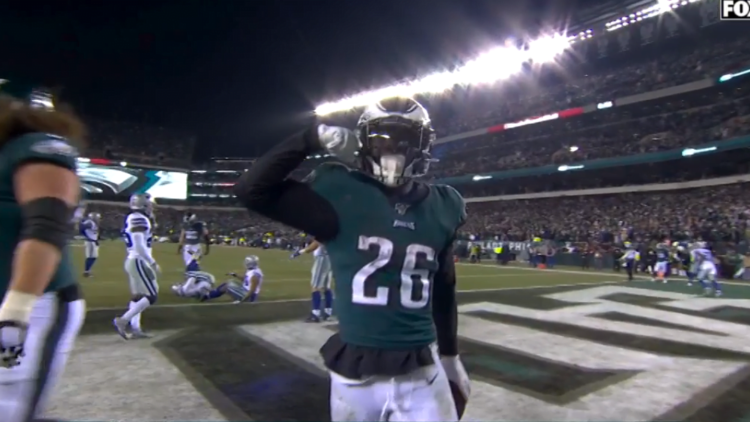 The Eagles have been in must-win games for the last month, their season is hanging in the balance, and a rookie running back has come to save them. Miles Sanders has racked up 246 rushing yards, 151 receiving yards, three touchdowns, and has touched the ball 69 times for the Eagles in the last three games. None more important than their 17-9 win over the Dallas Cowboys. Over that span he has accounted for 31.4% of the Eagles yards, 50% of their total touchdowns, and 23.3% of their total points. He’s by no means a polished back at this point but let’s check out Miles Sanders and where he’s effective, struggles, and why he has a chance to give a spark to an Eagles offense that is looking to upset someone in the playoffs.

While Miles Sanders is still a rookie and is making some rookie mistakes, there’s a lot to love about him and his ability to make people miss in small spaces. His 3-cone drill at the combine was #1 for running backs at 6.89 seconds and while his 40 was middle of the pack at 4.49, he certainly has the speed to gash defenses when he gets a crease. His athletic abilities are most impactful when gets the ball in space on swings out of the backfield, screen passes, or on outside zone plays where he can read outside-in. He also does an exceptional job with draw plays and anything that gets him on the edge. That being said, he has a really difficult time reading inside zone, double-team blocks, and setting up his blocks to create space. The Eagles don’t ask him to pass protect much and he can lacks aggressiveness and toughness in meeting a LB at the line of scrimmage which results in him being pushed into the QBs lap but he gets the job done more often than not. The Eagles run game isn’t very diverse which limits Sanders in some ways. There is almost no power or pin and pull concepts and they rely almost exclusively on zone running game.

We’ll start off with his problems and inconsistency reading inside zone, being patient, and reading flowing linebackers. Inside zone is a run play that emphasizes double teams with two offensive linemen double-teaming a defensive lineman before one moves off and climbs to get to a linebacker. This theoretically creates push at the line of scrimmage while also allowing linemen to get onto the second-level defenders. The running back has the option of staying playside on the dive (solid arrow), reading off the flowing linebackers for the cutback underneath the backside double team (dotted arrow), or bouncing (white arrow). By pressing the dive, in this case, off the left guard’s (#77) left hip, the linebacker #47 is forced to read the direction of Sanders. This gives time for the double team to work up to him and for the center #62 to get onto him for a block. Sanders reads that the playside dive is unavailable with the strong safety #20 coming in to fill and takes the cutback line for a positive gain.

This is exactly how you’re supposed to run inside zone. It forces the linebackers to flow and think, your linemen get push up to the linebackers on the double teams, and the running back patiently takes what’s available to them. Unfortunately, Miles Sanders does this with wild infrequency. For every time he makes the right read, he will look to bounce outside and get tackled for a loss or no gain.

Here’s an example of Sanders working the same concept, but trying to bounce it outside when both of his double teams are winning and have created 3 yards of push downfield. His first read, the dive, is there but he lacks the discipline and patience to take the positive yardage in front of him.

Here is another example of Sanders trying to bounce and lacking patience with the double teams on inside zone.

While watching Miles Sanders work the inside zone can be frustrating, when he hits it, he has exceptional burst in the open field. Where he really excels is on outside zone and stretch plays. Instead of reading inside out like on inside zone, outside zone emphasizes pushing to the outside as much as possible until each sequential gap is sealed by the defense. It can force the defense to over-pursue to the outside and opens up lanes underneath. The difference is night and day for Sanders who becomes way more decisive, explosive, and dangerous with his lateral quickness and ability to plant and get north and south.

You can see in the gif below how when #53 seals the outside on defense, Sanders cuts up underneath. He then progresses to the next block, where #47 again has outside leverage. Sanders once again cuts up underneath and falls forward for a seven yard gain. The outside zone stresses the defense and forces them to pursue to seal the outside which can open up lanes on the cutbacks underneath. Sanders continually excels at these plant and go concepts that utilize his lateral quickness and allow him to see the field while in space on the fringes of the field.

Giving Sanders space and creating an “open field” environment is what he thrives on. On inside runs when things are condensed and he can’t see the field, he tends to make poor decisions and has a tendency to try and bounce outside where he’d then be able to work the open field. You can see even on this outside zone play when he takes the track of running outside and it’s quickly sealed off, he’s much more powerful and decisive cutting up and towards the teeth of the defense than he is on inside zone plays.

Again , despite a poor initial aiming point, he is much more decisive and explosive off the outside zone blocking scheme with the offensive line stretching to the right while double teaming up to the linebackers — helping Sanders get outside and to the edge of the defense.

To utilize him in space, the Eagles love to run screens with him. They usually run a guard and center two man screen that gets Sanders out near the sideline with blockers in front of him where he can see the field and gash defenses.

Kelce #62 is an absolute monster in the open field. There’s not many centers that are even close to being as athletic as he is and that are able to get on small and shifty defensive backs. He’s exceptional on reach blocks for outside zone as well and he perfectly suits the skill sets of Miles Sanders. Sanders is great at reading blocks in space that are more lateral in nature. That’s why he excels both at outside zone and in screens, swing passes, and quick pitches. He can struggle taking the right initial track but as he gets more experienced, that should buff out.

On their screen versus Dallas, they ran a play-action before leaking Sanders into the flat. Instead of having Sanders pass pro, the Eagles will play-action him into the flats a lot to use him as a hot read for blitz pickup instead of having him meet a linebacker at the line of scrimmage in a scan protection on normal drop-backs. This way, you avoid putting a rookie running back who is still developing in blitz pickup in harm’s way and also get one of your best players in space out into the flats. Against Dallas, they use this and leak out both guards and their center to screen for Sanders off the play-action. Sanders does a great job reading in the open field and picks up 26 yards.

While Sanders definitely has some aspects to his game that need to be polished and worked on, he is an exceptional weapon in the open field and on outside runs. Used the right way, he can be a huge weapon for the Eagles as they attempt to write another Cinderella story and make a playoff run. With his ability to read pin and pull blocks, outside zone, and be effective in the screen game, he can damage a defense in multiple ways. The true test is whether he can become more decisive in the inside run game and gain the tough yards that the Eagles will need to be true contenders.