NFL Film Breakdown: The Chiefs’ Offensive Onslaught vs. the Texans 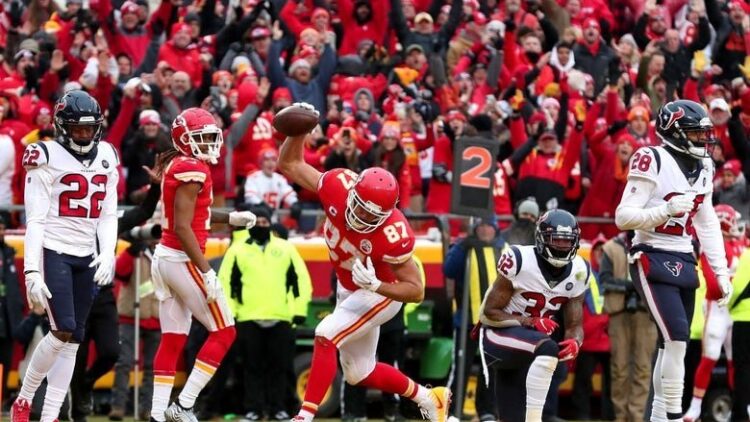 14 minutes and 18 seconds, 213 yards, and 34 points later, the Chiefs had erased a 24-0 deficit to the Houston Texans and never looked back. After everything that could go wrong for the Chiefs, did, Patrick Mahomes and Travis Kelce started to click and the Texans couldn’t recover. On a day where Mahomes led the team with 53 yards rushing and where the Texans outgained the Chiefs 442 yards to 434, it was Kelce’s 3 TD, 10 reception, 134 yard performance that ended up taking over and knocking the Texans out of the playoffs. But what changed? Why did the flood gates open? Why did the Texans offense disappear? Let’s look at the Texans defensive calls, the Chiefs offensive adjustments, and how Kansas City was able to battle back and get the Texans on their heels.

The Texans and Chiefs took two very different approaches on defense. The Chiefs ran a ton of safety rotations where they would move their safeties late in the snap count to give the Texans different pre- and post-snap looks. Kansas City ended up in predominantly a two deep look with a lot of cover 2 or 4 and daring the Texans to run the ball. Kansas City wanted to force Deshaun Watson to process post-snap while also keeping the lid on the defense preventing any game-changing deep balls to a healthy Will Fuller and Deandre Hopkins. The Chiefs also threw in some inverted coverages, pure man, and single high safety looks. They morphed and changed from snap to snap and really dominated the Texans throughout the game despite the yardage numbers given up by the end.

The Texans came in with the plan to run against two high safety looks and pass against one high – nothing too revolutionary. The problem with that is that the Chiefs made it extremely difficult for the Texans to know pre-snap what coverage they were going to get. Despite this, the Chiefs consistently gave the Texans a light box. Sometimes even leaving 6 against 9 and pleading for the Texans to run the ball. More often than not, the Texans wouldn’t. Houston averaged a respectable 4.5 yards per carry for 94 yards on 21 rushes but quickly got impatient and turned away from the run game. To put things in context, the Texans scores resulted from a busted coverage, a blocked punt, and a muffed punt within the 10. While seeing a score of 24-0 might look like a team is dominating offensively, the Texans were struggling to maintain drives throughout the first half and Deshaun Watson ended up completing only 59.6% of his passes and taking 5 sacks. Let’s quickly take a look at what the Chiefs did on defense and the Texans plan on offense before flipping the script and checking out how the Chiefs were able to start scoring on the Texans.

We’ll start with the Chiefs light run box against the Texans. Here the Texans are running an inside zone look with seven potential blockers against the Chiefs six defenders. On top of that, the Texans are leaving the end unblocked and reading him, making it 7 on 5 for the Texans. This should be a run every single time until the Chiefs have to bring more people down to protect against the run. The Texans execute perfectly bringing a running back across to block for the QB keep and they gain an easy 10 yards.

Once again the Chiefs are in a two high safety look here and the Texans are in 11 personnel with one running back and one tight end. Seven blockers on seven defenders. The Texans run a power concept with a pulling guard to take away the man-advantage of the defense and gain an extra blocker and they get an easy 6 yard gain.

Here’s a great example of the Texans game plan. You can see as #32 towards the bottom of the screen (highlighted) walks back to give a two safety look, Deshaun immediately checks the play to a run.

Below are a couple examples you can check out where the Chiefs are rotating a safety down towards the line of scrimmage or having them bail on the snap to take a deep half of the field in coverage. A couple of these rotations caused Watson to hold the ball and ended up forcing a sack as you can see in the last gif

The Chiefs consistently changed coverage and forced the Texans to adjust post-snap. They gave light boxes and dared the Texans to run and the Texans weren’t up for the task. Given the lead that the Texans created for themselves, it would’ve been the perfect opportunity to force the Chiefs into a single high safety look with their run game. Instead, the Texans took a gamble in their own territory on a fake punt and turned the game into a track meet – something you’d prefer not to do with a team as talented as the Chiefs.

Now, what did the Chiefs figure out that made them so successful from the 2nd quarter on? Well, as much as Kansas City rotated their coverages around and forced Watson to diagnose coverage post-snap, the Texans did the opposite. Houston chose to run almost exclusively a single high look with man coverage underneath. The Chiefs recognized this with 8:49 to go in the 1st quarter when they called their first RPO man-beater concept for a 15 yard gain to Kelce. While the Chiefs’ recognition of the Texans coverage didn’t manifest into any points because of some dropped balls and a couple missed reads by Mahomes, the writing was on the wall for the Texans defense.

Let’s start off with the previously mentioned play at 8:49 in the 1st quarter. The Chiefs run a super basic RPO rub concept with Kelce releasing to the flats and the outside receiver stemming his route into the DB before breaking on an out at 5 yards. This forces the defender #32, rookie Lonnie Johnson Jr., who is in man against Kelce to navigate through traffic to be able to get to the route run by Kelce. He’s caught up by the traffic that the rub creates and can’t get there in time to make an impact on the play.

And from there, the man-beaters kept coming. The Texans chose to put 2nd round pick and rookie #32 Lonnie Johnson Jr. on Kelce for most of the day – a guy who’s given up a 111.6 passer rating when targeted on the year. While Justin Reid got a few cracks at covering Kelce, he didn’t do much better and the majority of Kelce’s 134 yards came on Johnson Jr. (including two separate pass interference calls). The Texans understandably chose to give safety help over Tyreek but the thought behind manning up against a top two tight end in the league with a rookie and expecting to have any kind of consistent success is an interesting decision. Throw in a lack of coverage disguise against one of the best quarterbacks playing right now and an offensive mastermind in Reid and you’re in for 51 points of trouble. The Texans never really got out of their Cover 1 man look and while they occasionally rotated into zone or doubled Kelce inside out, they didn’t do enough to make the Chiefs work for it or adjust post-snap.

While it took the Chiefs a drive or two to get to their man-beater concepts, Mahomes was also not very sharp at the beginning of the game. With 8 minutes in the 1st quarter, the Chiefs ran and RPO with Kelce crunching across the formation into the flat – forcing the defender, #32 to track across traffic to be able to make a play. It goes for a 5 yard gain, but if Mahomes reads the rub at the top of the screen, he would see that his TE on the playside, #81 is open right off the snap on a rub wheel for a huge gain. At this point the storm is brewing. The Texans just did not match up well with Kansas City’s skill players and seemed unprepared for any switch calls which would have avoided the pick plays that Kansas City was beginning to run.

Mahomes definitely missed some wide open receivers early in the game otherwise the Texans 24-0 lead probably never happens. Here’s another example of Mahomes missing outside WR #14 streaking down the field with a couple yard separation in man.

Here’s another man-beater that’s called early in the game that ends up being dropped. The Chiefs use pre-snap push motion to move the RB out to the sideline for two reasons. 1. It helps to diagnose that it is man coverage and 2. This clears the linebacker in the middle of the field that is manned up on him. Really good understanding of the coverage and use of motion and formation by Andy Reid on this call. The Chiefs then run a rub concept to the 3 receiver side where #11 Demarcus Robinson clears across the field leaving his defender to navigate the traffic created by the bunch trips formation.

Here is a rub route finally manifesting in a TD. Kelce drags across the middle and creates traffic for the man defender on the running back and creates just enough space for Mahomes to fit in a throw for a touchdown.

The Chiefs would also isolate Kelce on the single receiver side, tighten his split, and let him work one-on-one against whoever was covering him. In this case, Lonnie Johnson Jr. got hurt the play before on the kickoff and the Chiefs immediately went after Reid who was covering Kelce while Johnson was hurt. Kelce’s combination of size, strength, and speed, make him an incredibly difficult matchup and he feasted on the Texans secondary.

Here Lonnie Johnson Jr. gets beat so bad off the line that he has to get a pass interference call to prevent the touchdown. The Texans simply had no answer for Kelce or the Chiefs passing game once Andy Reid figured out what they were doing.

Lastly, Mahomes killed the Texans with his feet. A huge weakness of man is that if you’re facing a mobile quarterback, you’re susceptible to big chunks of yards being gained on scrambles. Since all the defenders are in man and have their backs turned to the quarterback, there’s nobody that has eyes to stop him if he gets out of the pocket. Mahomes did just that to extend drives and create explosive plays on the ground.

While the Texans invited the Chiefs to throw, the Chiefs invited the Texans to run. Against a team as stacked as the Chiefs are at skill positions, it was only a matter of time before the dams broke and the Chiefs started to pile up points. Mahomes struggled to see the field early but the combination of Kelce and Hill is extremely taxing on defenses and at some point, you’ll have to pick your poison. The Texans lack of patience in the run game and lack of answers to combat rotating safeties by attacking vacated zones ultimately doomed them. The Chiefs may have been happy to let the Texans run, but I can promise you one thing: if the Chiefs invite the Titans to run this Sunday in the AFC Championship, the Titans will take that bait every single time.

If you liked this post make sure to subscribe here and let us know what you think. If you feel like donating to help us keep things running, you can visit our Patreon page here. Make sure to follow us on Instagram @weekly_spiral and twitter @weeklyspiral for updates when we post and release our podcasts and blog. You can find the Weekly Spiral podcast on Spotify or anywhere you listen.