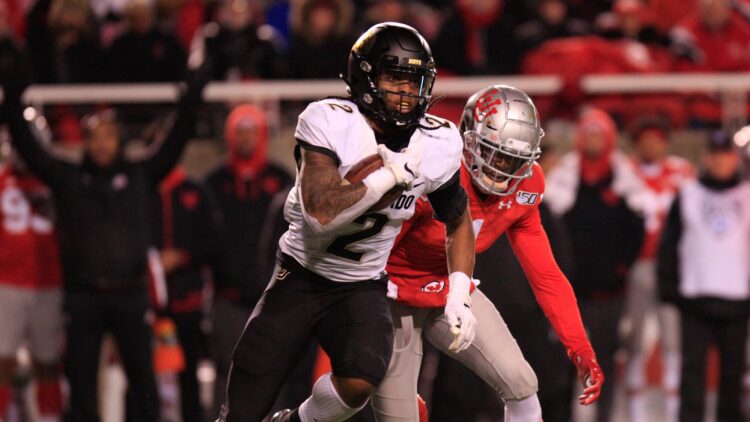 Woahhhhhhhh, we’re (over) halfway there! Part 3 of our first big board is here. Lots of these guys will be draft higher than where I might have them. So much talent, but several guys who might have one glaring deficiency. On the flip side, there’s a few prospects here where maybe I’m higher on than most!

Calling this man large would be an understatement. He is a massive individual. Measured at 6-7, 370 lbs, Becton would come in and immediately be a physical presence on any offensive line. Moves incredibly well for a player of his stature which makes him scheme versatile, only boosting his stock. Played LT in his college career and dominated in the run game, showing a nasty streak with finishing off plays. Won’t get bull rushed in pass protection but did at times get beat on counter moves and stunts. This could be a correctable mistake with coaching and developing a better feel for the game, but still something of concern. The main issue with Becton will be keeping his weight at a playable level and staying in proper shape.

If the NFL draft was the animal kingdom, Ruggs would without a doubt be a cheetah. Some reports say he is a legit 4.2 40 runner and can take the top off the defense in a hurry. Has strong hands and didn’t have many drops in his career which proves that he’s not just a speed guy which bodes well for his long-term success. In a system with a quarterback with a strong arm, he would flourish and be a game-changer. He did play alongside elite talents like Jerry Jeudy, so I never saw him as the top guy on the offense and in result never cracked 800 yards in a season. Also, we saw way too much catching with his body which makes me question his aggressiveness as a receiver in traffic.

Vision? Check. Size? Check. Great Feet? Check x100. Swift has been a constant threat out of the backfield in his three years in Athens, including his freshman year where he shared a backfield with current NFL running backs Sony Michel and Nick Chubb. The first thing you notice about Swift is his ability to break tackles with jukes and spin moves, which is an attribute to his elusiveness, vision, and speed. Also, he displays good hands out of the backfield and was the third-down back during his entirety as a Bulldog. Will probably never become a power back, but with the way he maneuvers in space and hits the hole, I don’t envision any limitations in his career. Played through a few injuries this past season which may have contributed to him fumbling more than the previous two seasons combined, but still something to pay attention too.

For the better half of the past two seasons, Sheanault has been the heartbeat of the Colorado offense. He was used as a swiss army knife, lining up at outside receiver, slot receiver, running back and even quarterback at times. This was more so a result of the lack of talent around him, but there is no doubt Shenault was the main focus of the opposing teams defense every week. He has great size and athleticism which he uses to his advantage especially well in the slot. Displays great hands and will be productive after the catch with his ability to break tackles. Did have a dip in production this past season which was a result of being doubled team essentially every play. Doesn’t show the route running ability of other prospects in this class and also seems to check out mentally during large portions of the game if he isn’t getting the ball. With the right coaching and quarterback that will be able to get him the ball quickly, he could flourish and has one of the highest ceilings in the draft, but has a low floor too.

One of my favorite prospects in the draft, Bryce Hall definitely isn’t for everyone but in the right scheme could become an absolute stud. Could have declared for the draft last season, Hall decided to return for his senior year but was hampered by an ankle injury and only played in six games. Was a four-year contributor for the Cavaliers and was hailed as one of the best recruits in program history. He made an impact off the field as well, receiving academic honors and taking a leadership position in several campus and community roles. Great size and plays very physical which would help him in a zone scheme, something he is comfortable in. While not fast, very quick in short areas which showed up in coverage and also in stopping the run. Had seven forced turnovers in his career (all of which in his first three years) and had an incredible 21 passes defended as a junior. Wasn’t asked to play much man coverage and whenever he did, the results varied. At times, he would look very strong and at other times didn’t have the speed required to keep up with receivers. Would be perfect in a traditional Seattle-style defense.

A solid man corner, Fulton was a key starter on the 2019 national championship LSU team that featured one of the best secondaries in the nation. Has the size (6-0, 200 lbs) that NFL teams desire in a shutdown corner and on tape was very impressive in man coverage, rarely losing in that coverage. Will make his money in press coverage. Was suspended for the 2017 season for tampering with a drug test which raises maturity questions. Only two interceptions in his career and doesn’t look smooth or as comfortable in zone coverage, something that many teams prefer to run. Played on a strong defense, particularly in the secondary with Delpit and freshman superstar Derek Stingley, Jr., so never was the one guarding the opposing team’s star player. Gets beat over the top too much for a guy of his size and athletic ability. Some teams will value him more than others, but in the right system will be a starter right away.

Despite being apart of a historically bad defense the past two seasons, Murray figures to project as a tackling machine at the next level. A true sideline to sideline MLB that uses his speed to track down ball carriers at the drop of a hat. It looks like he is shot out of a cannon once he sees his lane to attack. Serviceable, but not great, in coverage but definitely talented enough in that aspect to be on the field at all times. Sometimes plays too aggressive and quick and will overrun a play or misdiagnose it. Because of this, he will allow big chunk plays on play-action and RPO’s. Personally, I think he would play best in a base 3-4 that would allow an extra linebacker to be in position to clean up a play but because of his aggressiveness, I expect to see a lot of impact plays from Murray in the near future.

With the ideal size and athleticism, Higgins has a good chance, if used properly, to be a very productive receiver in the NFL. He developed a good connection with Trevor Lawrence and became the top target for a very good offense the past two seasons. He is excellent at using his size to his advantage and making the contested catch in traffic. Also, excelled as a deep threat which is evident by his 19 yards per reception this past season. Does a good job of attacking the ball in the air and not waiting for it to come to him. Not explosive after the catch but was able to pick up yards nonetheless. Ran VERY limited routes in college. Essentially only ran deep go routes or comeback routes. Was not as productive when told to do anything else. However, even if he doesn’t develop as a route runner, I think he will become a strong #2 receiver and thrives in the right system with a strong-armed quarterback.

It would be very tough to find a player more productive on the defensive side of the ball the past three seasons that Curtis Weaver. Racked up 34 sacks and 47 tfl’s for the Broncos and was the 2019 MWC defensive player of the year. Very refined pass rusher and had to be due to the fact he’s not a great athlete. Has a high football IQ as it’s displayed in diagnosing run and pass plays and jumping snap counts. Played with both his hand in the ground and standing up which makes him valuable as a 4-3 defensive end or a 3-4 linebacker. Due to his current skill set, I feel as a player he may have already reached his potential. Regardless, he’s going to be a consistent producer and may never be a pro bowler, but will have a role for many years.

Welcome to the electric factory boys and girls. Anytime the ball touches Hamler’s hands, there’s a threat that it will go all the way for a score. A small yet dynamic receiver works very well from the slot, he gets open with quickness off the snap and exceptional route running then after the catch he turns into a human videogame. Really tough to keep up with and tough to tackle. Not afraid to take a hit and operate over the middle. Excelled as a punt returner and kick returner during his two years at Penn State as well. Only 5-9, 170 pounds and almost all of his production came from the slot which may limit his upside but would do best in an offense that runs a lot of RPO’s and uses their playmakers in creative ways. It’s pretty simple actually, get him the ball and good things will happen.