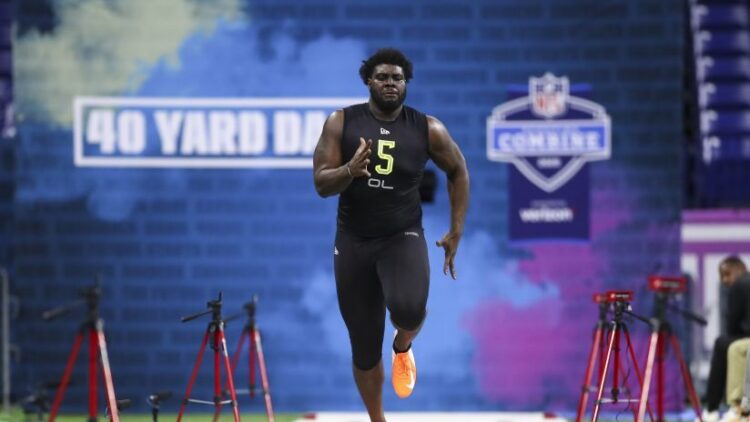 The NFL Combine (or as I call it the Underwear Olympics) is the official start of draft season. While I do think people over-evaluate the combine, it’s still important for prospects to have a good showing. Players can possibly make or lose millions of dollars with their performance, so it’s a vital part of the process. It’s also the first chance that teams get to meet with prospects and get to know them as people, rather than just on tape. Essentially it’s the first step for teams at the bottom to try their attempt to get back to the playoffs, like the 49ers did this past season.

Coming into the combine, many didn’t know what position Claypool would play at the next level. At 6-4, 238 pounds, he’s the size of a tight end but exclusively played receiver at the college level. However, after running a 4.42 40, he made a name for himself and his stock is now quickly rising. There have only been two receivers at that size who have run the forty-yard dash at 4.4, Claypool and Calvin Johnson. Talk about elite company. A potential mismatch nightmare, Claypool to me is now solidly a Day 2 pick. Get him in the right offensive system, and he can be a vital weapon.

We all knew that Becton was a physical force of nature, but I questioned if possibly he was too big and wouldn’t be able to stay in shape. Boy, did he prove me wrong. First, he checked in at 6-7, 364 pounds but more importantly, only had 17% body fat. For reference, the average male body fat percentage is between 8-19%. That’s a huge win for Becton. Then, he tops it all off by running a 5.11 40, which is the fastest recorded time for someone over 350 pounds. This shows that regardless of the offensive system, Becton can play in it. He still has some technical flaws to clean up, but I would say he’s a top-ten pick guaranteed at this point.

If you were to have me guess who would be the fastest running back in the draft, I’d list off about ten players before getting to Jonathan Taylor. And yet again, I would have been wrong. Taylor had a blazing 4.39 40 time, which made him the fastest running back in the class despite coming in at 226 pounds. One of my original concerns with Taylor was that he wasn’t a great athlete and would be essentially a power guy like he was at Wisconsin. Now, we see that he has the speed to run outside zone with, thus improving his stock quite a bit.

I might have to start calling Tristan Wirfs Captain America because it’s almost like he was built in a laboratory. Everybody knew he was a great athlete, but he might have had the greatest combine for an offensive lineman. He set the record for his position at the broad jump and vertical jump and then set the record for the fastest 40 for a player over 320 pounds (4.85). He is an absolute specimen and had a better vertical (36.5”) than DeAndre Hopkins, Jerry Jeudy, AJ Green, and Amari Cooper. He’s my #1 OT in the class for now.

In my first big board, I had Winfield Jr. higher than most people. After the combine, I look right for once. He’s short at 5-9, but came in at over 200 pounds and ran in the 4.4’s. To me, this shows that he has the stature to play aggressively in the box, but the speed to play deep in coverage as a single high safety. All of this was evident on tape, but people were unable to look past his injury history. By coming in healthy at the combine, I’m not overly concerned about it and I believed he established himself as a first-round pick.

It’s almost tough for me to consider him a winner because we knew he was a freak athlete, but I mean wow. Just wow. At 6-4, 239 pounds he ran a 4.39 40 and an 11’00” broad jump. This man is not from this planet. He’s a one of a kind prospect, there’s no real comparison to him. I would still list him as a linebacker, but he’s going to line up at all three levels on defense. Any team that passes on him after the top 5 will be making a huge mistake.

I compared Shenault to Deebo Samuel, a player who can make things happen when the ball is in their hands. But after a poor 40 time (4.58) and having to get surgery on a core muscle injury that will sideline him for about two months, I’m starting to second guess him being a first-round player. He had a great 2018 but didn’t replicate the production in 2019. I thought it could be due to defenses double-teaming him, but now I need to go back and look at the tape. I still think he’s going to have a good career, but in a loaded receiver class, he pushed himself down in the rankings a bit.

Adams was never going to test well at the combine but had to participate to prove to teams that he is healthy after a long history of various injuries. However, he may have proven to be the worst athlete at the event. He essentially was last or in the bottom five in every drill for offensive linemen and showed major limitations athletically. I can’t see him as a tackle now and think he’s a guard but isn’t athletic enough to play in zone blocking schemes. He’s going to have to stay healthy and be in the right system in order to be a productive player. To me, he’s no longer a top 50 prospect. And then there’s this response. I mean….. like something’s you should just keep to yourself but appreciate the honesty.

Count me as a HUGE AJ Epenesa fan. HUGE I SAY! But he cost himself millions with a poor performance at the combine. He ran a 5.1 40, but the most telling part of his run was a 1.81 ten-yard split. For a defensive lineman, particularly one that’s playing on the edge, that’s a really slow time. Epenesa will never be a great athlete and that’s not how he wins his pass rushes. He relies on technique and power, but he needed to show some sort of quickness to solidify himself as a top pick. While I’m still high on him, he’s going to slide in the draft and be a late first-rounder.

He’s still the top player on my board so don’t read too much into him being a “loser” here. He didn’t even participate in drills this weekend so he didn’t hurt his stock at all, but he didn’t help it. I honestly believe if he had done the drills and performed well, that he could have put the Bengals in a tough situation. Let’s say he ran a great time and showed himself to be an athletic monster, the Bengals have to consider him right? Also, with the reports that the Redskins, who picked second, are meeting with Joe Burrow and Tua Tagovailoa, I have to think that Young going to the Redskins isn’t the slam dunk pick anymore.