Draft Risers and Fallers/Big Board 2.0 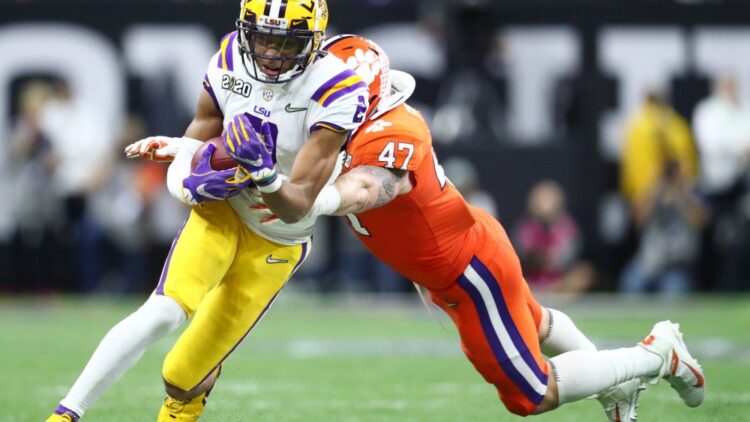 A lot has been said and written about Becton over the past few months for a good reason. He originally was seen as a fringe first-round prospect who intrigued people with his massive size but wondered about his conditioning and his technical abilities. On tape, you’re able to see him move defenders out of the way with ease and great traits in pass blocking that will surely allow him to be elite in that regard. Then, he dropped the hammer and had one of the best combine performances this year. He’s going to be a top-ten pick and has a chance to be the first tackle taken.

As a Notre Dame fan, I always was a fan of Claypool and his potential, but unsure of how he will do as a pro. Does a great job of boxing out fighting for the contested catches. With an impressive combine performance, he solidified his status as a day two pick when coming in he was a sure Day 3 selection. Despite his impressive speed, he doesn’t offer too many after the catch, but what he does provide is a mismatch nightmare. You can line him up at a variety of different spots and a creative offensive mind will turn him into a star. I’d love to see him in an Andy Reid-style offense where he will move all across the formation.

In a class where it’s top-heavy on offensive tackles, it’s also a decently strong interior offensive line group with the best of the bunch being Ruiz. He was on my radar as a third-round pick in December but has steadily become more impressive the more I watch him. A versatile player, he played center for Michigan and can play guard in a pinch. Really good athleticism that’ll make him a really attractive option for a zone-blocking scheme offense and is ready to step in and start right away. I think we can see him go as high as 19 to the Jaguars and at this point surely won’t drop out of the first round.

To be honest, I hadn’t watched much of Igbioghene until about two weeks ago as I hadn’t heard too much hype around him in terms of being a first-round talent. But as I dig deeper into this class, I was pleasantly surprised to see the upside he provides. Others are taking notice too as he is now slated to be a late first/early second round pick. He started his time at Auburn as a receiver and moved to cornerback as a sophomore where he took off this season as a junior. A really good athlete, Igbinoghene will need a year before being thrust into a starting role, but based on his athleticism and how well he played in limited experience in a major conference, I think he will be a long-term starter in the league.

While he did play with Joe Burrow this past season which helped his cause, Jefferson continues to climb up boards as you can tell how great individually he played. While a star-studded offense does help open things up for any player, Jefferson showed strong hands and the ability to get separation from defensive backs. It’s a very crowded receiver class, but Jefferson has done the most in my eyes as of late to propel him up draft boards and solidify him as a first-round pick. He’s a perfect option at this point for the Eagles at 21.

Once in the conversation of being a top 20 selection, Shenault had a poor combine and core surgery which are the main reasons why his stock is plummeting. He was the heart and soul of Colorado’s offense two years ago but struggled this past season to stay healthy and be the focal point of a young offense. He offers great versatility and can be a playmaker, but may not have the ceiling we once thought he did. Still a first-round possibility but it’s starting to look like he’s going to be picked in the middle of the second. Once my third overall receiver, he is at seven now. The perfect scenario for him is that he goes to a creative play-caller, like Matt Nagy with the Bears.

Let the record show, I’m still a huge Delpit fan but it seems everyone else is cooling off of him. Coming into the season, he looked like a lock to be a top ten pick but some inconsistent moments and injuries have him looking at a late first/early-round selection this year. I think people are looking for a reason to bash him by nitpicking small details. He’s still a versatile player who can play either safety spot and displays good coverage abilities mixed in with aggressiveness in the box. He will more than likely be an immediate starter and while might not be the Pro Bowler we hoped for in his first year, he will be an impactful player. If I were to bet, I would feel confident betting him getting picked between 20-29.

Epenesa was another top ten projected pick just a few months ago who is now holding on for dear life hoping to get picked in the first round. One of the best defensive players the past two seasons, Epenesa has been a sack machine for the Hawkeyes. He is a throwback and relies on technique and IQ rather than athleticism. In a league full of explosive athletes off the edge, he relies on pass rush moves and hand placement. However, he ran a 5.1 40 at the combine which is very slow for an edge player. He’s also a little too small to play inside as tackle all three downs which makes teams nervous. If I’m a team drafting at the end of the first round, specifically the Vikings and Seahawks who need edge players, I’m going all-in on this guy.

Fromm’s fall from being a top prospect is much different than the others on this list. Two years ago at this time, he was the odds on favorite to go first overall as he had lead Georgia to the title game as a freshman. He had a strong sophomore season but regressed this past season. In reality, he should have stayed in school and work on his arm strength and accuracy, but decided to head to the NFL. Now, he’s at best an early second-round selection with being an early third the probable outcome. I think he has a high floor but a low ceiling and has a lot of Alex Smith to his game. If that can happen, he will be more than worth a Day 2 pick.

While he has the desired athleticism and length to be a high-level pass rusher, injury concerns and lack of production are pushing Lewis’ stock down and out of the first. I like his potential as a 3-4 edge and believe that he can be a solid player for many years to come. However, I’ve noticed how many of his sacks come off of stunts and not off of technique. Being able to stunt is a valuable skill to have, but I’d like to see more pressure coming off the edge. He has the speed and athleticism to do that but has to show that at the next level. I’d pick him at the top of the second, but one team will have to believe that they can coach him up.