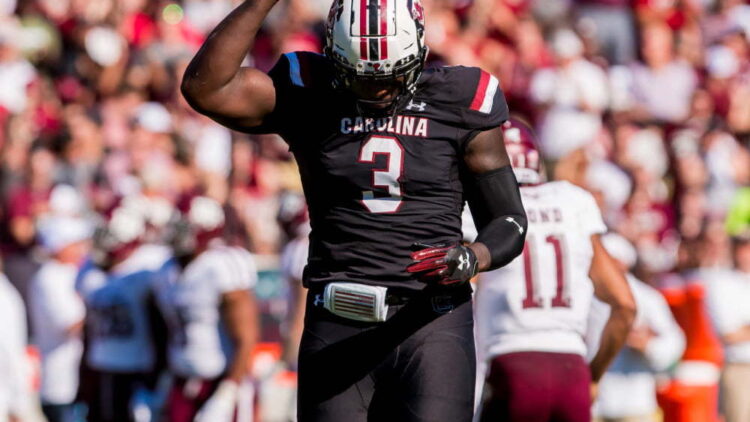 The expectation was that the 49ers were going to be a team aggressive in trading down, gaining more picks than the six they had coming in. However, in typical 49ers draft fashion, things did not go how we all planned. They went better. Each move and selection came with a purpose and a plan. Here I talk about each pick and what each means to the franchise.

The 49ers loooooooove their defensive linemen and for the fifth time in six years, they drafted one in the first round by selecting Kinlaw. To be honest, I was upset at first thinking that there was a greater need at receiver and a duo of highly regarded receivers sitting atop the best players available. I felt that the team can’t simply replace a player like Buckner and a committee of Solomon Thomas, DJ Jones, Kevin Givens, Kentavius Street, and Julian Taylor can fill-in at three-technique. Then I quickly snapped back to reality and realized that Kinlaw has the upside and talent to be the next Buckner. Kinlaw is 6-5, 315 lbs, and a human wrecking ball that can blow up tackles and guards with pure power and quickness. While he won’t replicate Buckner’s production in year one or year two, he’s going to be a good player for years to come. Great teams build identities, the 49ers identity is having a strong defensive line which results in having a great defense. By drafting another young lineman that’ll put pressure on the quarterback, you’re ensuring that you’re committing to that identity. In the short-term he’ll start but not have to bear the weight of the line like Buckner did early in his career, but to just simply do his job, which is to provide interior pressure to force the quarterbacks to panic and to occupy blocks on runs.

Also, what a trade by Lynch to gain a fourth-rounder to move back one spot. It would come in handy….

It was no secret that the 49ers were going to target a receiver early and from a pure schematic point of view, Aiyuk may have been the best fit. Shanahan agreed as he said that Aiyuk was the #1 receiver on his board and doubled down by saying that the team considered drafting him at 13. So, the team got aggressive and decided to move up from 31 to 25 to draft the Arizona State product as they felt that he would not have been there at 31. Aiyuk isn’t the biggest receiver, but he has an insane wingspan (81 inches) and has fairly good speed (ran a 4.5 at the combine). He’s very similar to Deebo Samuel in the fact that they are explosive and are excellent in intermediate routes (slants and dig routes notably) and both are exceptional in the run after the catch. Aiyuk seems to have no fear over the middle and is afraid of contact, similar to Deebo and which is something that’s plagued Dante Pettis so far. He does struggle with beating press coverage, but do you know a way to beat that? Using pre-snap motion, which the 49ers implement on nearly 80% of their plays. Shanahan loves chess pieces that he can use to manipulate the opposing team’s defense to exploit their weaknesses and Aiyuk is certainly an intriguing one.

Trade for Trent Williams, this years 5th and next years 3rd- Reloading

Highway Robbery. Another great trade by Lynch and company to send a 5th and next year’s third to pick up one of the best left tackles in the league. Even if Williams isn’t the elite tackle, which would not be a total surprise after not playing an entire season, I can’t see him being anything worse than a very good tackle. The 49ers lucked out that the Redskins are a poorly run organization and that Williams wanted to come out west, but sometimes it’s better to be lucky than good.

Trade Matt Breida to Dolphins for pick 153- The Future

Breida was a dang good back for the 49ers the past three seasons and should receive nothing but praise from the Niners faithful. An undrafted, undersized speedster immediately stepped in and was a good #2. However, with a 3.2 million cap hit this upcoming season and the emergence of Raheem Mostert, the need for Breida just wasn’t there anymore. Getting a 5th for him is good value.

Fans want every pick to be a home run and that every selection should be a pro bowler, but that’s not how things work. You need to find the players who are going to round out the roster and bring value in multiple aspects of the game. McKivitz may very well develop into a starter, but more likely than not he’s going to be a high-level starter. What he is going to be is a guy who can play all across the line and be exactly what a back-up offensive lineman should be. He’s a quick and athletic guy for his size which makes him a perfect fit for the 49ers offense. Laken Tomlinson and Daniel Brunskill figure to be the starting guards this upcoming season, but in case of injury or inconsistent play, then McKivitz will get his chance to play.

This was the move that we all knew was coming. Goodwin had a great 2017 season, but injuries and drops moved him down the depth chart. Being the highest-paid receiver on the roster, it was time to move on to clear cap space for a future contract extension for Kittle. Moving up 20 picks was good, but getting rid of Goodwin’s contract was better.

Every team needs a player or two with a junkyard dog’s mentality. Willing to be physical and do the dirt work and not receive the notoriety for it. Last year a prime example of that was Levine Toilolo, the third tight end and blocking specialist who only had two receptions all season. However, he was vital in the running game and saw his playing time increase during the playoff run. Now that Toilolo’s with the New York Giants, the need for a blocking tight end is massive. Kittle is the best blocking tight end in the league, but also the best receiver on the team so he can’t be tasked to do one or the other. That’s where Woerner comes in. He’s not as big as Toilio and has a body type similar to Ross Dwelley, who isn’t known for his blocking but loves to get his nose dirty and deliver pancakes like he’s working at IHOP. Woerner won’t appear often in the box score, but his footprint on the team will be seen.

A team at any level can’t be successful with a bunch of choir boys, you need a few guys who will bring the fight. Jennings ran a slow 40 time and had multiple disciplinary issues at Tennessee, but for a 7th round pick, he’s worth the risk. He adds a wrinkle to the 49ers offense that they were missing last year, a big-bodied receiver who can operate in the slot. While he’s not fast, he’s very good after the catch because he’s so strong which leads to him breaking tackles. Jalen Hurd is who the coaching staff and fanbase wants out there, but he’s been injured and is a question mark right now. The team did come out and say that Hurd is cleared, but nothing wrong with some insurance. If he can keep his head on straight, Jennings can make the team due to his value as a receiver and special teams ability. Deebo, Aiyuk, Bourne seem to be locks, Taylor and Bourne are if they can stay healthy, which leaves Pettis, James, Benjamin, and Jennings to fight for one or two spots. I’m willing to bet Jennings makes the team.

There always seems to be at least one undrafted player that makes the team every year. The better that the team has gotten, the chances that these guys have to make the team go down, but there’s still a chance someone slides into the rotation. I would say there are four guys who have a chance to make the team at some point next season: RB’s JaMycal Hasty and Salvon Ahmed, DB DeMarkus Acy, and S Jared Mayden. Hasty is a smaller, stouter runner who isn’t a burner but hits the hole hard. Ahmed is a Breida clone, relatively skinny for a running back but has great speed. Acy is an athletic corner who needs a lot of work but has the upside and special teams to be in consideration for a spot. He’s battling Tim Harris, Dontae Johnson, Jason Verrett, and Teez Tabor for a roster spot. Finally, Jared Mayden, who started this past season for Alabama and has experience at every defensive back position. He’s best suited off at strong safety where he has to compete with Marcell Harris. Think former 49ers Adrian Colbert for this one. I do hope that Chris Finke aka The Slippery Fox makes the team. That’s just too good of a nickname.

All in all, it was a very good draft for the 49ers, showing that quality is more important than quantity, especially when you are a team ready to win now.