Reich Has the Colts Run-Game Rolling 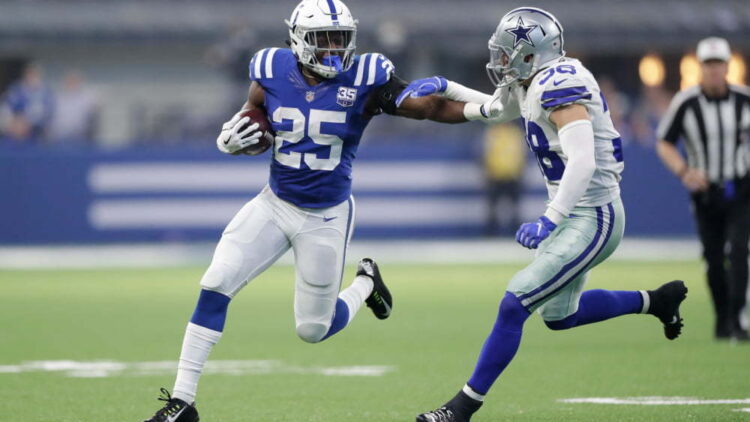 The Indianapolis Colts racked up 2,130 rushing yards on 4.5 yards per attempt and boasted the #3 ranked offensive line according to PFF. Marlon Mack went over 1,000 yards rushing and added 8 touchdowns on the ground. Their guard Quenton Nelson has the best two-year run-blocking grade and what used to be a weakness for the Colts has been totally revamped in the last few years. Nyheim Hines adds speed and a receiving threat out of the backfield with 320 yards receiving and the scheme run by Frank Reich since coming over from Philadelphia has really set the Colts up for success. Reich’s diverse run game creates lanes and different looks similar to the way that Shanahan does in San Francisco and the Ravens have done with Lamar Jackson.

Coming from the Andy Reid and Doug Pederson coaching tree, Reich differs from Shanahan and McVay mainly in his lack of pre-snap motions and shifts and using multiple schemes as the foundation of the run game. There definitely is still some window dressing but Reich largely attacks in the multitude of ways he asks his linemen to block. Many teams subscribe to slight variations of inside zone or outside zone. A few sprinkle in power and pin and pull schemes – Frank Reich does it all. The change in the Eagles run game without him has been the most telling as they have shifted to an almost exclusively outside zone team with Miles Sanders since he left.

We’ll start with their use of the outside zone and stretch and then progress to the multiple looks that the Colts gave defenses. The big difference between outside zone and stretch is the aiming point and track of the offensive line and running back. In outside zone this is typically off-tackle. In a stretch scheme, the aiming point is the force defender outside – usually an outside linebacker or strong safety. The basic concepts are the same though. The 49ers run it a ton with Raheem Mostert as do the Raiders with Josh Jacobs. The Colts offensive line is impressively athletic and fast though and can really reach and seal on stretch looks to the outside.

Here, the Colts run outside zone weak away from a tight bunch formation with #84, Jack Doyle and two receivers. This causes some alignment issues for the Jaguars as they’re now strapped to maintain a numbers advantage to either side. They have 6 on 5 to the strong side with a corner off the screen and 4 on 4 to the weak side with a middle field safety. Simple math says to run weak and that’s just what the Colts do. Since the defensive end is playing in a wide 9 technique, the play-side tackle doesn’t even try to reach and scoop him and instead drives him up and out of the play. Quenten Nelson #56 does a great job of fighting to get his hips square and keep the defender inside his frame which allows the running back to get outside. Once he’s outside, it’s the running back on the safety 15 yards down the field. This isn’t anything wild or schematically crazy. Reich just set up a formation to put the defense in conflict and then took advantage of the numbers.

When the outside does get walled off and that aiming point outside the tackle or force defender is taken away, all of the Colts’ running backs do a good job of reading and cutting underneath flowing defenders. Since the Colts are so effective at reaching and getting outside, it forces linebackers to scrape over the top more aggressively which then opens up some comeback lanes backside which is exactly why the outside zone scheme can be so effective for backs with good vision.

They’ll also run outside zone out of a split back formation which isn’t something you see a ton. The 49ers will do it with Kyle Jusczyk or Kittle at fullback or H but rarely will they line up in a true split back formation. This again gives the Colts the numbers advantage. There’s 4 defenders on 4 blockers and it’s the backside linebacker that ends up having to scrape across all the traffic and make the play downfield.

Sometimes, the Colts line doesn’t even need the formational help. They can straight up just be more athletic and seal off linebackers and defensive ends.

A small wrinkle to add to the outside zone look is to put in a split flow with the H back coming across to attack the backside defensive end. This allows for more space on cutbacks in case defensive end or outside linebackers stay tight to the line of scrimmage and hold contain.

If defenses are falling asleep on that backside crunch action, the Colts will just hand it off to the H coming across on a jet action.

A less common addition to that outside zone look that I absolutely love is the power pitch underneath it. The track of the running back stays the same but the play-side defensive end is left unblocked now and the backside guard pulls around as if he’s running power. If the unblocked defensive end comes upfield, the guard should go underneath him and lead up the field on the pitch option to the H. If the end stays flat or comes down the line, you give it to the running back. I’m also a big fan of shifting into a split back formation with one of their receivers Pascal to give a different look and to then hand it to him on the outside zone look with Ashton Dulin, another one of their receivers, being the pitch option.

You can also see another shovel option with a normal split back look and Jack Doyle running the shovel track.

The Colts also like to run pin and pull action with their athletic linemen. They’ll even trust smaller receivers like #14 Zach Pascal to wall off and pin defensive ends when they’re in tight splits close to the offensive linemen. This makes it tough for linebackers and defensive tackles to scrape across the pin and allows for bigger guys to get in space and block smaller defensive backs. The rest of the line runs a stretch and seal concept where they sprint to get leverage to the play-side and then wall off defenders almost like a punt return or kick return to one side of the field. They run it both with and without a receiver and it’s just as lethal with the tackle pinning as a wide receiver in a tight split

One of my favorite window dressing plays is a simple down-block concept that has everyone on the line attack and seal the first person to their inside shoulder with the H coming across on a crunch that works almost like a single person counter action. It was super effective and opened up gaping holes. Both times, Reich runs it off of a shift which forces the defense to communicate before quick snapping it and coming back across to the same side the shift came from.

Throw in some jet sweep or orbit motions and now you’ve got defenses totally out of position with linebackers tracking the jet and filling incorrectly which allows for the Colts offensive line to take good angles and open up huge holes for Mack and company to take advantage of. Watch the linebackers and see how many of them track and go with the orbit motion instead of staying play-side with the running back.

So now if you’re a defensive end or linebacker you can get stretched and sealed on outside zone, kicked out by an H on split zone, run underneath on a shovel option, or pinned by a receiver or an offensive tackle. It makes their jobs incredibly tough and gives false read keys for linebackers as well. Add some window dressing and flare on top of it and you’re asking a whole lot of every single one of the defensive players in the run game. Receivers can end up in the backfield, at H, motioned, released on play action, and the list goes on.

Reich has completely transformed the Colts’ running game. The diversity in looks that they give teams every single week make them difficult to prepare for and with a stable of capable backs in Mack, Hines, Wilkins, and now Jonathan Taylor taken in the 3rd round of the 2020 NFL Draft, the Colts are going to be a tough team to stop on the ground. Throw in Philip Rivers to keep defenses honest and the Colts could absolutely win the AFC South. Frank Reich has built that offense to live off the run game. Now that they have a quarterback again, they should give the Ravens and the Chiefs a run for their money to represent the AFC in the Super Bowl.