Trevor Lawrence Breakdown: The Prince That Was Promised 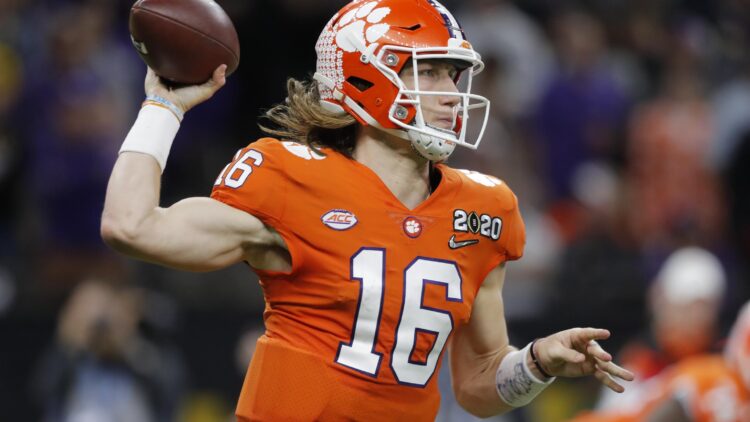 The story of Trevor Lawrence is known by now. The top recruit in the 2018 class broke high school records set by DeShaun Watson and led Clemson to a National Championship as a true freshman. From the moment he stepped on campus, he’s been seen as a generational talent and the probable first overall pick. . As I break down Lawrence, what I thought coming in was confirmed. He’s a rare prospect. The term “can’t miss” is thrown around way too much, but in this case it’s deserved. After a strong 2020 season that saw him named once against a Heisman finalist, Lawrence is the best college prospect I have ever scouted. When you match the success on the field with the physical toolset, Lawrence is a franchise changer and will become the next mega star in the NFL.

The ball shoots out of his hand like a cannon and he makes it look so effortless. To compare, Patrick Mahomes’ top throwing speed at the combine was 55 mph and Lawrence’s top throwing speed in 2019 was 61 mph. Whether he’s in the pocket or scrambling, he’s able to get enough juice on the ball to fit throws into tight windows. As you can see below, he can throw it sixty yards in the air while making it look easy. To me, this is his best attribute as there are technical things you can clean up, but you can’t teach the arm strength he possesses.

I’ll break down his mobility into two parts: pure ability as a runner and throwing on the run.

As a runner, he shows great athleticism for a guy who’s listed at 6-6 and 220 pounds. Clemson runs a lot of zone reads and trusts his decision-making to make the right read. When he decides to keep the ball or they run a play designed for him (mostly counters or QB power), he shows speed and good vision to make the big play. For as much as people talk about his natural ability as a passer, his running ability is severely underrated. When the play breaks down, he’s excellent at scrambling and finding ways to pick up extra yardage. He’s never looking to run first, but teams will often blitz linebackers or drop them into coverage due to them being fearful of his arm. When this happens, he tucks the ball down and is able to make a play.

The second part of his great running ability is the fact he keeps his eyes down the field while scrambling and is able to complete passes on the run. I see too often in college (and sometimes in the pros) that quarterbacks panic under pressure and will run without looking down the field. Trevor Lawrence can scramble out to either his left or right and has the arm strength to get the ball to his receivers. As NFL offenses get more creative and put mobile quarterbacks at a premium, Lawrence makes himself that much more valuable with his versatility and athleticism.

Like a great shooter, when Trevor Lawrence gets hot he quite simply does not miss. This is evident on deeper throws that require some touch on the ball. We’ve seen a lot of quarterbacks with rocket arms, but the great ones are able to loft passes over defenders and right on target to their receivers. On these throws, Lawrence is mechanically sound (we’ll get to that later) and as you can see pushes off his back foot rather than solely using his pure arm strength. Quarterbacks who can make these throws, especially down the sideline, are ones you see starting on Sunday’s.

Trevor Lawrence 100% passes the eye test. He looks like he was made in a quarterback laboratory. If Lawrence is actually 6-6 as indicated on the Clemson website, it would make him tied for the tallest starting quarterback currently in the league. At 220 pounds, he could add another ten or so pounds of muscle, which will help him against bigger NFL defenders and he has the frame to put on that weight while maintaining his speed. Mechanically speaking, he has a clean release that doesn’t include a hitch or herky-jerky movement. He does a good job of using his lower body to drive the ball forward and for the most part does a decent enough job of setting his feet with smooth footwork. You’ll also notice how his feet are always moving and he’s never a statue in the pocket. It’s the little things that give you the big gains.

Needs To Work On

Trevor Lawrence truly believes that he can use his arm strength to throw though any window, no matter how small it may be. Because of this, Lawrence makes a lot of bad decisions that resulted in him doubling his interception total from his freshman year and got lucky on several occasions. His whole life, he’s been able to use his arm to make any throw, even if he was staring down a receiver. However, as there’s more tape on him and the competition gets better, he’s not going to be able to get away with this. This is the mindset that many great gunslingers have which has resulted in high interception totals for all-time greats like Brett Favre, Dan Marino, and Peyton Manning. You have to take these kind of mistakes because for every head-scratching moment, they have four or five ‘wow’ moments.

Like mentioned before, sometimes Lawrence trusts his arm too much. He’ll miss open receivers, usually by throwing high and outside, which is an indication of throwing too hard. I compare this to seeing a hard-throwing pitcher, you have to learn to contain your power and become a pitcher rather than a thrower. It’s frustrating to see because Lawrence will make so many great throws and then misses some easy ones, but it comes with the maturation of every great quarterback.

Not Sliding/Protecting himself while running
This is just nit-picking now, but he needs to be smarter when running. I understand he’s a football player and he’s not afraid of contact, but as a franchise player he has to be cautious and make sure he can stay on the field. It may cut down on some game breaking plays like the one he had against Ohio State in the Playoff Semi-Final, but it’s going to ensure his longevity.

In conclusion, Lawrence is a special prospect and has a higher grade than recent #1 picks like Joe Burrow, Kyler Murray, and Baker Mayfield. Barring an unforeseen situation, Lawrence will be a Jacksonville Jaguar and figures to become a breathe of fresh air for a struggling franchise. This might be a hot take, but I would expect Lawrence to play as a borderline top ten quarterback as a rookie. Buckle up Jaguars fans, the fun is about to begin.