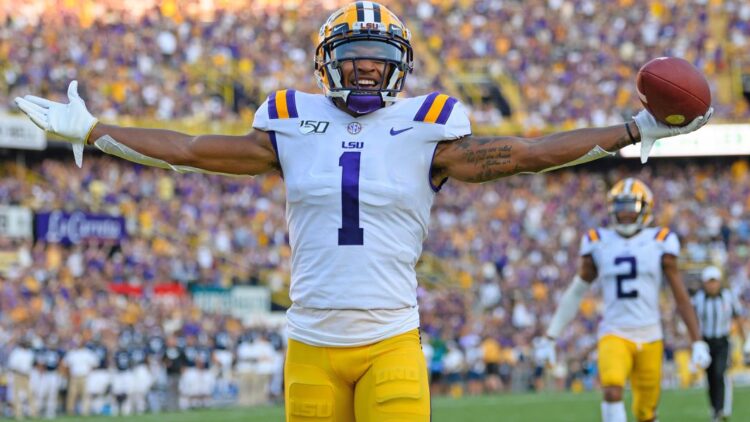 LSU has been on fire as of late when it comes to producing top receivers. Odell Beckam, Jr., Jarvis Landry, and D.J Chark have recently risen to the ranks of the leagues best receivers with another former Tiger receiver, Justin Jefferson, being taken in the first round in 2020. However, what if I told you that the best receiver prospect in the school’s history still has at least one more year left in the Bayou? That’s right, Ja’Marr Chase, the All-American who had the most receiving yards and touchdowns in the nation this past season, might just become the best receiver in the NFL one day. Blessed with exceptional athleticism and a high football IQ, Ja’Marr Chase will surely hear his name early in the 2021 draft, barring an unforeseen situation arising. A wide receiver hasn’t gone in the top-five since Corey Davis in 2017, but even in a draft class that looks strong, I believe that Chase has the talent to worthy of such a high selection in 2021.

To keep it simple, Ja’Marr Chase is a big play waiting to happen. I mean you don’t haul in over 1700 yards receiving and 20 touchdowns without the ability to stretch the field. At 6-1, 200 pounds, Chase isn’t the biggest receiver but is solidly built to go up and get the ball in the air. There were several times where Joe Burrow, the 2019 Heisman winner, underthrew a deep pass, but Chase is able to track the ball so well it doesn’t mattter and he goes and gets the ball. If you take a quick look at his production, you’ll want to attribute it all to Burrow, but in reality, Chase does an exceptional job of helping out his quarterback when he didn’t make the best throw. He does a good job of keeping his eyes on the quarterback, which gives him the advantage over the cornerback. If he sees where the ball is going, and the cornerback is focused on guarding him then he can adjust to where the ball is going. That seems like such a simple thing to do, but at the college level, most receivers are unable to do that. Finally, he is really aggressive as a receiver which helps him in getting open. He’s not afraid to hand fight with receivers and when the ball is in the air, he will go up against any defender knowing that it’s his ball to catch.

Once the ball is in Ja’Marr Chase’s hands, especially over the middle, he puts the defense on notice. He’s strong enough to break tackles and quick enough to outrun almost any player. It honestly looks like he turns into a running back on some plays because his vision allows him to take the optimal angle and beat defenders to the edge. He’ll be very productive at the pro level in a West Coast offense that’s predicated on quick routes and getting the ball into the hands of their playmakers. He looks a lot like Beckham, Jr., but stronger when he has the ball. There’s just a certain cat-like quickness that gets them open and then the determination and speed that ultimately gets them into the end zone.

As you can see in the gifs below, Ja’Marr Chase can make any defensive back look silly. His elite footwork keeps the defenders flat-footed and then Chase just explodes right by them. He does a great job on hesitation or stop and go routes, where his footwork to slow down and then regain top speed is downright nasty. You’ll notice that after his move to break apart, the corner is off balance and lunging to retreat. This is an indication that their footwork isn’t near his level and that Chase’s routes are something they didn’t anticipate. Another key and underrated part of route-running is using your hands without totally pushing off. Hand-fighting is legal and something that the best corners do well. However, Chase is crafty enough to use his hands to fight back with the defender and typically use them to disengage in order to break free.

When you play in the SEC, you face the top competition in the country week in and week out. But when you double down and torch a first-round cornerback on several occasions in the National Championship game, then you leave no doubt that you’re the best. I mean the stuff he did to A.J. Terrell is considered a crime in some states and he didn’t just burn him, he destroyed him. He went up against draft picks like Trevon Diggs, Noah Igbinoghene, and CJ Henderson, yet still lead the nation in receiving. Sure, having Joe Burrow helped a lot, but Ja’Marr Chase has to be given credit for going up against the best and coming out on top every week.

I’m nit-picking here but there are a few instances where Chase gets lazy when it comes to run blocking. It happens with most receivers, so it’s not a huge detriment to his overall game and it doesn’t hurt his stock in my eyes. It’s not that he’s bad at it as he does a decent enough job when the efforts there, but that effort comes and goes. If this is your main weakness, you’re doing something right.

I really do believe that Chase is a game changer at receiver and within a few season in the league will be a top receiver. As of late, teams have been patient in drafting receivers early because there is such great value to be had in the middle rounds. Despite this, I think Chase could and should be an early draft pick in 2020. He has no major holes in his game and assuming he continues to progress, he’ll be most teams WR1 right away. I am interested to see how he does without Burrow and he will surely see some sort of regression stat-wise but that has to be expected. Despite this, he’s just too dynamic of a player to not produce and could repeat as an All-American.