Why Jared Goff and the Rams Will Be Just Fine 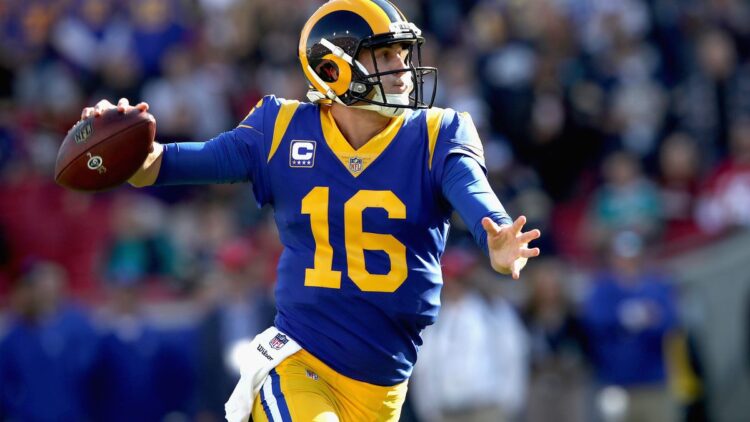 Jared Goff and the Rams’ 2019 season didn’t go as planned. Interception numbers went up, touchdown throws went down, and the Rams missed the playoffs after playing in the Super Bowl in 2018. While the scrutiny has been on Jared Goff after signing his $134 million contract, the Rams’ offensive line went from being ranked 5th in the NFL in 2018 to dropping all the way to 31st in 2019 according to PFF (Linsey, 2019). getting rid of the ball faster and running more play-action in 2019, Goff and the Rams still experienced pressure at a rate of 4% higher than 2018 (Linsey, 2019). While he has some issues locking onto receivers, getting follow through with his back leg, and dipping his shoulders at times, it’s hard to be mad at a guy who’s experiencing pressure by the time he’s at the top of his drop. Throw in the fact that pressure is the absolute worst thing that can happen in a McVay offense with lots of longer developing routes on shallow crosses and deep shots downfield off play-action and you’ve got recipe for a disappointing season.

That being said, when Jared Goff has a clean pocket, he is rated as the 6th best QB in the league over the last three years and that’s exactly what the film showed. Goff’s mechanics are some of the best in the league. He is incredibly consistent in his base, footwork, and throwing motion. His feet stay wide, he moves with subtly and quickness in the pocket, can stand strong and take hits, and shows good mobility throwing on the run. Part of Goff’s tendency to lock on or struggle was that he just flat out didn’t have time to read anything other than the first thing he saw because pressure was there so fast.

Despite a lackluster 2019, Jared Goff can 100% get the job done and be worth the huge contract he signed. Let’s take a look at what exactly Goff is bringing to the table and what went wrong for the Rams in 2019.

As mentioned before, Goff is one of the best in the league in a clean pocket. He shows excellent mechanics, throws with anticipation, and is worth every penny of $134 million. Here on play-action he keeps a perfect base with his feet just outside of shoulders, throws with anticipation before the receiver is even out of their break, brings his leg all the way through, and delivers a dart 25 yards downfield and on the sideline.

Here again he shows great anticipation and mechanics as he begins his throwing motion before the receiver has cleared the linebacker. He understands where the hole in the zone will be, keeps a good base on his hitch steps and brings his leg through on the throw. The Rams are exploiting the weaknesses of cover 2 here and McVay schemes it up so that the middle linebacker is pulled up on the spot route by Gurley leaving the window open on the second level for Cooper Kupp. The opposite slot is running a post behind it so if that is covered and the safety comes down on Kupp, you now have a ton of field to work with on the flat post behind it.

Jared Goff can dice defenses up out of a clean pocket. His arm talent and ball placement is exceptional when he has nobody is at his feet. You can see him earhole a defender that’s trailing in coverage in the first gif and fit the ball into the window between the corner and safety in the next one.

He moves subtly in the pocket to keep his feet and base underneath him while avoiding pressure, constantly keeps his eyes downfield, and looks like a top tier quarterback.

On play-action and rollouts he shows touch and accuracy – dropping it over linebackers and in front of safeties or driving the ball on crossers. His eyes stay downfield, he’s mobile, and understands the flow and position of defenses.

The issue is that sometimes this pressure is so quick and immediate out of his drop or run fake on play-action, Jared Goff only has time to read one thing. This can lead to some rushed mechanics where he doesn’t follow through, has shoulder lean, or can lead to poor decision making where he doesn’t have time to verify where defenders are – resulting in miscommunication with receivers, bad interceptions, or inaccurate balls.

It can be hard to blame him when his back is turned to the defense on a run fake and when he turns around he has pressure in his face and immediately has to locate and diagnose a defense. This is why McVay’s system is so reliant on an offensive line. It’s not just the building off of outside zone that helps it go, they also need to give extended time to the quarterback on play-action since his back is turned to the defense for the first second of the play. A lot of times Goff simply doesn’t have time to execute the scheme which is why you saw his numbers dip and the success of the Rams go with it.

That being said there are clearly times where he isn’t seeing the field the same way his receivers are even in clean pockets. He can expect a back-shoulder, throw a ball skinny when the receiver is running flat, or throw to a window the receiver isn’t ready for. These aren’t mechanical inaccuracies, they’re conceptual and scheme issues where he and the receiver aren’t on the same page.

Goff’s mechanics are largely clean but he can have issues with shoulder lean when he drives balls. Ideally, when completing the throwing motion, you want your hips and shoulders parallel with the ground. When you tilt or lean it can cause balls to sail on you because you’re now releasing at a higher apex point and you’re less consistent from throw to throw.

The same thing happens when he leaves his leg on the follow through. It prevents full hip rotation and reduces the power of the throw which makes his throws less accurate and in some cases prevents scoring plays. In the play here if this ball is a little further out with more air, it’s a walk-in touchdown. Instead, Goff leaves his back leg and doesn’t complete his follow through on the throwing motion and the ball is short. This issue crops up from time to time and generally just reduces his power and velocity on the throw causing balls to be late or inaccurate and disallowing potential yards after the catch.

Despite the occasional issues with his follow through and shoulder lean, Goff is one of the most mechanically clean quarterbacks that I’ve seen. His base is always solid, he has an efficient throwing motion, generally good hip rotation, can put touch on the ball, and understands defensive vulnerabilities. His mobility in the pocket is also a huge strength of his. Almost any quarterback would struggle with the 31st ranked offensive line in the league and Goff is no exception. The Rams offense is predicated on running the ball and having time to let routes develop on play-action. Without those two things, things are going to be a struggle. It’s clear to me that Goff is not the problem in LA. If that offensive line can just get back to average, the Rams will look like a completely different team. With an NFC West division that is now chock full of talent and elite teams, the Rams will need that line to step up. If they do, there’s no reason that Goff and those skill positions can’t make another run at a Super Bowl.