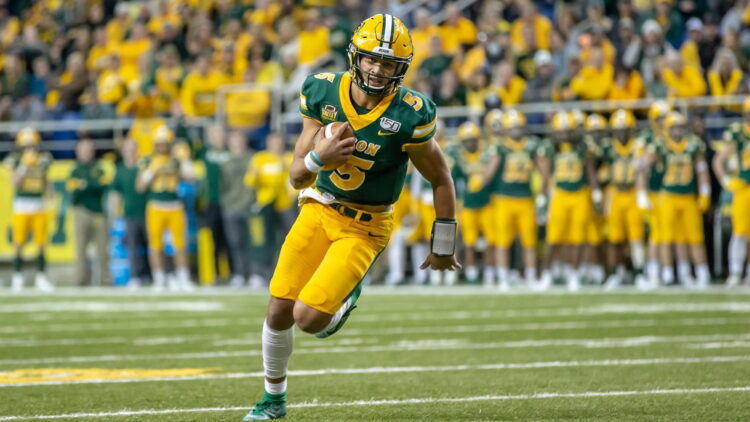 Unless you’re a die-hard college football or NFL draft fan, you’ve never heard of Trey Lance. Hell, I had not heard of him until this past April. He plays at FCS (also known as 1-AA) powerhouse North Dakota State who were the FCS champions in 2019. Lance lead the Bison to an undefeated season as a redshirt freshman and was the first freshman to win the Walter Payton Award (1-AA most outstanding offensive player, their version of the Heisman essentially). Lance was a three-star recruit out of high school and did have D1 offers from schools like Boise State and Western Michigan, but went to North Dakota State in the hopes to be a champion. With a rare blend of strength and speed, he reminds me athletically of Josh Allen and Cam Newton. While there’s still a lot to be developed in his game, there’s legit hype around Trey Lance and based on traits alone, he’s going to hear his name early whenever he decides to declare for the draft.

I don’t know what his 40 time is, but Trey Lance is quick. Very quick. If you allow him to get out on the edge, he’s more than likely going to outrun any linebacker and many defensive backs. He has great vision for a quarterback which allows him to find running lanes and follow his blockers. At 6-3, 220 lbs, he’s not afraid to throw his weight around and run through defenders. This is a reason why he reminds me of Cam Newton or Josh Allen. While he’s a little bit smaller than those guys, they are all excellent runners and do a lot of their damage on the ground despite not being freakishly fast like Lamar Jackson or Kyler Murray. Trey Lance will be dynamite early in his career off of read options and RPO’s. While he does eventually need to learn how to slide and not take as many hits, a huge part of his game is being a physical runner and picking up extra yardage where he can.

Another 2021 quarterback prospect with a bazooka for an arm. While I don’t love his throwing motion all the time (more on that later), he’s able to get some distance on the ball and also has strong zip when he needs to put some mustard on the ball. The fact that he’s able to roll-out or sit in the pocket while making a strong throw bodes well for his long-term future and makes him even more dangerous. Due to his mobility, there will be plenty of chances to take some deep shots off of play-action that might not necessarily be the game plan for North Dakota State but will be in the NFL.

He runs the ball with a purpose and often times is the short-yardage back for the Bison. While I think his coaches might hold their breath sometimes when he tries to run over defenders, to me it shows that he’s willing to do whatever it takes to win. That’s the ultimate sign of a competitor in my eyes. Sure, he will need to slide or get out of bounds more but if he can be used in a similar way to how Cam Newton was used in Carolina, then he’s going to make some team very happy.

You don’t throw for 28 touchdowns and 0 interceptions without being a great decision-maker. I don’t care what level of football it is, it’s almost impossible to do better than that. In fact, the one turnover he had all season, a fumble, happened in the first quarter of the first game of the season. That means he went 15 games and three quarters without turning the ball over. Absolute insanity.

Like many young talented quarterbacks, he has the skill but now just needs to control it. He has a tendency to be a little wild, which is tough to imagine since he completed 66% of his passes. However, he’s in a run-first offense that gives him a lot of chances to make open throws. He overthrows a lot of passes and struggles put enough touch on the ball. This is a common tendency in quarterbacks with strong arms at this age because they’ve always been the best player on the field and could make that throw 9/10 times in the past. When you climb up the ladder and face tougher competition, you won’t be able to get away with missing throws by being wild. For a first-year starter, stuff like this is totally normal but still has to be talked about.

Trey Lance played baseball growing up and you can see that in his throwing motion. He has a long wind up and a dip motion which is something you can get away at the 1-AA level but can’t in the NFL. He will need a lot of work to shorten this motion while still keeping his strength, but it is possible. If he can spend his first season, and maybe even second season, learning the playbook and working on a quicker throwing motion, that would be best for his development. Look at guys like Tom Brady and Jimmy Garroppolo in the NFL and you’ll never see the ball or their arm drop down when throwing. It simply goes straight back and forward, oftentimes like a sidearm motion a second baseman does when throwing to first. On short and intermediate throws, a more condensed motion will get the ball out quicker or even stop you turning the ball over. To his credit, he doesn’t do this motion every time but it happens more often than not. There have also been times where his footwork can get sloppy and he won’t do basic things like setting his feet or turning his hips towards his receiver and just relying on his arm to make the throw.

This is an obvious one, but no matter how good you may look, when you play at the 1-AA level people will question all of your success. He looked like a man amongst boys as just a redshirt freshman, but his opponents for the most part are not NFL players. He’s playing against a lot of future bankers, or at best, practice squad level players. It’s absolutely not Trey Lance’s fault, but you have to take it into account. Some may say, “well Carson Wentz played at the same school and is a pretty good player”. True, but Wentz was also at NDSU for five years before getting drafted and spent his rookie season experiencing a lot of growing pains. Trey Lance, in theory, would have just been in college for three years if he declares after the season and not nearly as polished of a thrower as Wentz was. He will get his chance this year though, as the Bison take on Oregon in week 1 (assuming the season happens, fingers crossed) in a must watch game.

Trey Lance’s ceiling is extremely high. In the right system, he has MVP potential. While he still has one more year to develop as a passer, I could also see him having a low floor if rushed to play right away. He’s incredibly tough to scout due to his competition and the fact he’s just more athletic than everybody on the defense put together. Some teams will like him more than others, but the hype around him being a high draft pick is understandable. I don’t think he will surpass Trevor Lawrence, but I wouldn’t be shocked at all if he cracks the top three in the 2021 draft.