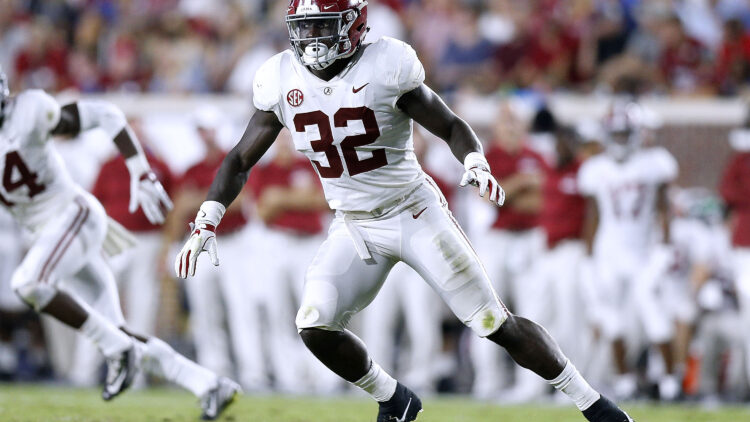 Dylan Moses, the 2016 Parade Magazine National High School Player of the Year had high expectations coming into Tuscaloosa. His high school highlight reel has amassed millions of views and he was offered a scholarship by LSU and Alabama in the eighth grade. That’s quite the legacy to live up too. However, as a sophomore in 2018, he was named a Butkus Award (nation’s best linebacker) finalist and seemed primed to break out as an All-American in 2019. Unfortunately, he tore his ACL just days before the season. In an unexpected twist, Dylan Moses announced he was returning for his senior season and becomes the leader on what should be a very good Alabama defense. He was likely to be a late first-rounder in 2020 but hopes to push his stock into the top half of the 2021 first round while also trying to lead the Crimson Tide to a National Championship.

It’s such a simple part of the game, but all good defenses are ones that don’t miss tackles. Dylan Moses is a very physical player when meeting a running back in the hole and rarely gives up any ground. Even though he isn’t the biggest linebacker, he will stick his nose in there and not give an inch. He is also known to the lay the wood and come up with a huge hit. Those kinds of plays and that attitude can totally change the landscape and momentum of a game. He makes it known that when you try to go up against him one on one, you will lose and you will wake up with a few extra aches and pains in the morning.

When he reads the play correctly, he can explode like an elite linebacker. He almost moves like a running back at times. He’s very quick and can also cut on a dime. Now there is some concern about him keeping his speed after his knee injury, but by all reports, he has recovered exceptionally well. In a league where mobile quarterbacks are succeeding more than ever, a linebacker like Moses is a perfect chess piece to counteract that. Use him as a “spy” on defense and he’ll be able to run down almost any player. He would be best utilized as a weak side 4-3 linebacker where he won’t be tangled up with big blockers in front of him and instead have the necessary space to roam and move fluidly.

In the Crimson Tide hybrid 3-4 defense, Dylan Moses lines up everywhere. He starts at middle linebacker, but plays a lot on the weak side, where he projects best at the pro level. He’ll even line up on the edge and will rush the quarterback from time to time. He is very comfortable and successful blitzing from any spot. There are also moments where he is lined up over a slot receiver (usually a tight end) and will do a good enough job of holding down that position. He might not be elite in pass coverage at this point, but has the tools needed to get to that level.

Slow to disengage from blocks

Dylan Moses might play strong when going against ball carriers but looks overmatched at moments against linemen or tight ends. He can get rag-dolled from time to time and be totally taken out of the play. He needs to do a better job of maintaining a lower pad level and using his quickness to break free of blockers. This is the main reason why I think he will be best suited on the weak side as he will not have to deal with blockers as often if he lined up in the middle. Hopefully, he used this rehab process to try and gain some more functional strength so that he will be able to play more physical against bigger opponents.

Putting it all together

For as athletically gifted as Moses is, he has some moments where I’m thinking “what in the hell is he doing?”. Whether it’s a misread or he’s just pushed around, he’s more athlete than football player right now. Of course, when we last saw him play it was during the 2018-2019 season where he was a sophomore, so it’s possible that he has gotten stronger and increased his football IQ. This isn’t a huge issue in my eyes, but some teams won’t like him if he doesn’t show signs of progression.

Moses is going to be a starter in the NFL. I have little doubt about that, but will he reach his potential of being an elite linebacker? I’m optimistic but would love to see him put it all together before getting to the league. He should be a first-rounder based on traits alone (assuming he is back to full health), but how high will be dependent on correcting his flaws.