Micah Parsons: A Monster In the Middle 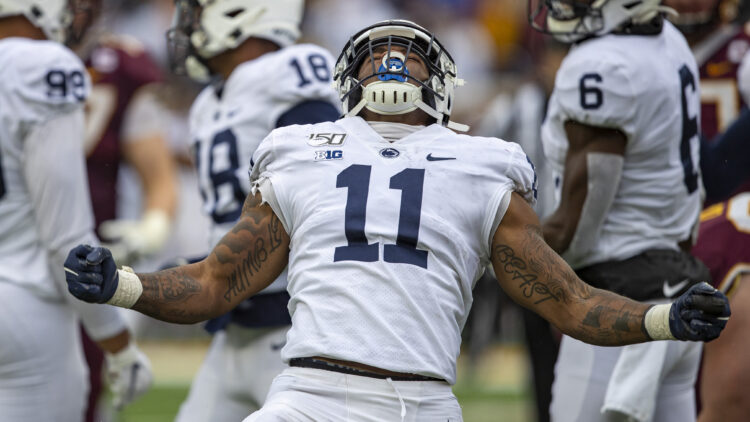 Micah Parsons came to Penn State as one of the highest-rated recruits in program history and has lived up to the hype so far. While he didn’t technically start as a freshman, he led the team in tackles in 2018 and then followed that up with becoming an All-American as a sophomore. He has the desired frame and rare athleticism that puts him in the mold of former first-round picks Isaiah Simmons and Tremaine Edmunds. There’s really nothing that he can’t do and the more comfortable he gets playing the linebacker position, the better he will get.

Simply put, he’s an athletic freak. For someone his size at linebacker, he’s incredibly quick and agile which makes him tough to block. If you try to use a tight end to block him, he’s going to get around him with ease. Then, he has too much speed for offensive linemen to get their hands on him. Not much an offensive coordinator can do to scheme around that. When he gets going downhill and with a full head of steam, it looks like he is shot from a cannon. The first-step agility that he possesses is extremely rare for his position and he claims to run a 4.4 40 time, which I totally believe. He has a pro-ready frame at 6-3, 245 pounds which means he can line up at almost any linebacker position and be a mismatch. Athletically, he compares very similarly to former Clemson and current Cardinals linebacker, Isaiah Simmons, who many called a generational athletic specimen. Those who drooled over Simmons will be feeling that same way about Micah Parsons.

Usually middle linebackers aren’t known to be skilled pass rushers. However, as you can tell, Micah Parsons isn’t like most linebackers. He gets off so quickly that if the offensive lineman doesn’t realize he’s blitzing, Parsons is in the backfield before they know it. While he doesn’t have a signature pass-rush move, he does a great job of using his quickness to his advantage. He’ll fake one way and then quickly wiggle past the much slower offensive lineman (usually the guard) to get into the backfield. As a versatile linebacker, no matter where he lines up, he will be able to blitz at an effective rate. I personally think he would fit best as a 4-3 MIKE or WILL, which is essentially what he is now. As he attacks the A or B gap, he has the vision and elusiveness to work around much slower opponents.

An incredibly underrated part of any defenders game is their ability to take proper angles to the ball. It’s especially important for linebackers in order to track down ball carriers and this skill can work well for a player who doesn’t have elite speed. Luckily for Micah Parsons, he does have that quickness and speed which allows him to move sideline to sideline. It’s important to not only work hard, but to also work smart and with instinct. Parsons just has the natural feel and nose for the ball that many all-time greats at linebacker have.

This has already been explained in his previous strengths, but I thought his run defense abilities should get some extra attention. Right now, his ability to stop the run is much better than his ability against the pass (0 career interceptions). He has a nose for the ball and does an exceptional job of getting past blockers and into the backfield. It’s almost comical to see a tight end or a receiver try to block him because it’s so evident that there’s just no way they can stop him.

Micah Parsons almost plays like he knows he’s better than everyone else, which will cause him to get fooled sometimes. He plays so aggressive that he can overrun a play or be out of place during an RPO. Yes, I know RPO’s are meant to make the defense wrong no matter what and in particular attacks the linebackers, but it’s too often that he’s out of place or a step too slow. At the college level, it does not backfire too often, but in the NFL where teams run it a lot more effectively, he will have to get better at diagnosing plays. The more snaps and practice he gets, the better he’ll get. But, until that happens it has to be a concern. Also, there will be moments where he gets too far upfield and lets the running back get by. This didn’t happen too often but popped up enough to raise some eyebrows. He will have to control his game and be more disciplined.

Everyone knows that pad level is key in football. Parsons too often will be upright and not gain leverage against bigger opponents while just trying to use his quickness. This works more often than not but if he played with this same quickness combined with a better pad level, I’m not sure anyone would be able to stop him. This is a very coachable issue and I don’t forsee it as a major problem in his future.

Many believe the linebacker position is dying due to the fact that the league is more pass-oriented than ever. However, the NFL is a copy-cat league and as more quarterbacks become mobile, the running game is sure to make a comeback. Because of this, finding players like Parsons who can do just about everything at a high-level is of the utmost importance. I think he can play middle linebacker in a 3-4 or 4-3 defense or weakside linebacker in a 4-3. This versatility has to make him a surefire top-ten pick in the 2021 draft.