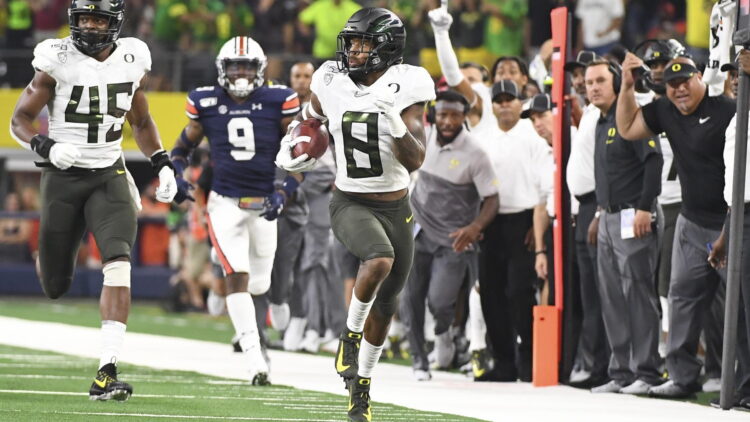 Jevon Holland might not be the big name right now for the 2021 NFL Draft, but he’s one of the best defensive playmakers in the class. He lines up in a variety of positions in the defensive backfield and makes plays no matter where he’s at. Coming from athletic powerhouse Bishop O’Dowd High School in Oakland, California, Holland made an impact off the bat as a freshman with five interceptions. Then, he moved into an even bigger role starting at safety and in the slot and was named a Thorpe Award semi-finalist (nations best defensive back). He figures to once again be key in the Ducks back end, where he looks to add to the nine interceptions he’s totaled so far in his career.

Jevon Holland currently sits tied for third on the FBS active interception list with nine, showing that he’s one of the best in the nation at taking the ball away from opposing quarterbacks. Sometimes he benefits from poor throws from quarterbacks and other times he has lock down coverage, either way, he’s taking advantage of the situation. The joke thrown around about defensive backs is that the reason that they are playing there instead of at receiver is that they can’t catch. A dropped interception is a huge wasted opportunity, so when a defensive back like Holland can come down with the ball then it has to be seen as a huge advantage for the defense. Also, being a ball hawk means that you are typically a high IQ player. You know when to turn your head around and locate the football, something that many defensive backs struggle with.

In order to be a good safety (or even slot corner for that matter), you have to be a physical tackler. Jevon Holland displays excellent tackling ability. Whether he’s meeting a running back in the hole or making an open-field tackle on the edge, he displays the toughness that most defensive backs just simply don’t have. This will bode well for whatever position he plays (more on that later) as he can be used as a chess piece and not be seen as a liability in coverage or against the run.

Whether he lines up in the slot, at safety, or even as a punt returner, Jevon Holland excels. I think his best position in the NFL will be at safety, which will allow him to then come down and guard the slot when the offense goes with three receivers. He may not be as dynamic as Tyrann Mathieu, but he can do a lot of the same things. They’re both football players and no matter what you ask them to do, they’ll do well. I’m not sure if he’ll be a punt returner at the next level, but he did average 15.2 yards per return, which was sixth-best in FBS last year.

Can get flat-footed in coverage

There were a few times that I noticed that Holland could get flat-footed in coverage. He particularly struggled with double moves and could get beat deep. It seems to be a problem of trying to sit or jump on comeback or dig routes before the receiver sprints right bast him as Holland has his eyes on the quarterback. You take the good and the bad with an aggressive defensive back and in a unique defense like Oregon runs, you’re not going to get much help deep if you’re the slot corner. I do believe he has the coverage skills to guard the slot in the NFL, so he’ll need to clean up some footwork to stop this from being a repetitive issue. If an offensive coordinator sees this, they’ll continue to exploit it over and over again.

Where does he play?

He plays mostly in the slot but projects best at safety. So, one would figure there might be a learning curve for him if a team wants him to become a full-time safety. It’s tough to call this a negative in his game, but something to keep note of. I think another comparison for him would be 49ers defensive back Jimmie Ward. Ward started as a nickel corner early in his career before moving full time to free safety. While he can play center field, I think that would be a disservice to his skill set.

While he isn’t getting the buzz he deserves, Holland figures to be a mid to late first-round pick in the 2021 draft. He’s a steady tackler and a strong cover guy meaning that no matter where he plays, he’ll do well. The slot corner position is one of the more challenging positions in the game and the fact that he has experience there is a plus. Versatility is a coach’s dream and Holland is going to make one organization very happy.