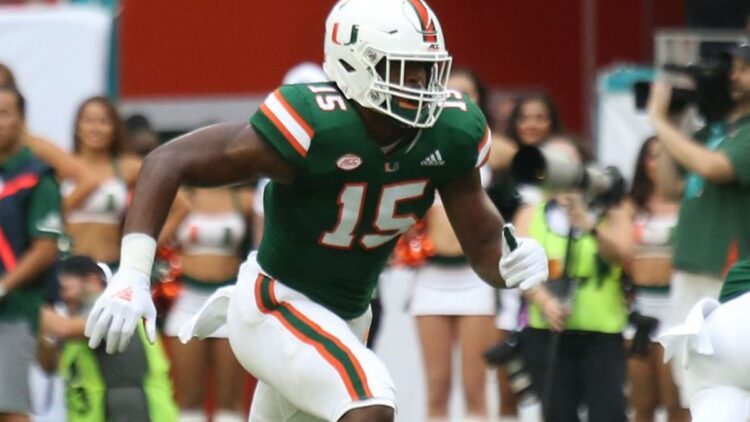 Gregory Rousseau exploded onto the scene in 2019 and became the best pass rusher in the nation not named Chase Young and did it as a redshirt freshman. He finished with 15.5 sacks (second in the nation) and 19.5 TFL’s (seventh in the nation), but flew under the radar on the national scene because he played on a 6-7 University of Miami team. While he is still as raw as an uncooked steak, Rousseau has plenty of desirable traits that teams will covet in what looks to be a weak edge class. Will he be able to follow up 2019 with another monster season? If he is able to get 14.5 sacks (which will be tough with a shorter schedule), he’ll be the first player in FBS history to have 30 sacks after his first two full seasons. Rousseau looks like a top ten lock at the moment and if he can clean up a few things, getting picked in the top five looks promising.

You don’t finish second in college football in sacks by accident. Simply put, Gregory Rousseau just knows how to get to the quarterback. Whether it’s his speed, size, or just being in the right place at the right time, he got the job done in 2019 with 15.5 sacks. He likes to use a nifty swim and rip move that is tough for linemen to stop due to his size (more on this later). I don’t think he’s the prospect Nick Bosa or Chase Young were the past two years in terms of technique, but Rousseau has so much untapped potential and skill as a pass-rusher that he’ll be the top edge player in this class.

At 6-7, 253 pounds, Gregory Rousseau is a specimen. At that height, he would enter the league as one of the tallest players and he uses his length to his advantage. He can afford to be a step late or initially misread a play because he can make up that ground quicker with his long arms. There will be moments where it seems the ball carrier is about to break away before Rousseau extends to bring them down. I referenced his swim and rip moves earlier and he’s able to be so successful at that because it’s almost impossible for linemen to keep his hands in front of them. I see Arik Armstead and DeForest Buckner, both the same size as Rousseau but much heavier, have similar pass rush moves, and have had success at the NFL level. General Manager’s and scouts salivate at arm length and Rousseau has to be a favorite among that crowd.

From the film I watched, I saw Gregory Rousseau line up as a 4-3 end, 4-3 defensive tackle, nose guard, and at 3-4 standing outside linebacker. While he profiles best currently as a 4-3 end, also known as a 5 technique in most systems, it’s good to know that he can play all across the line. As he matures and gains more muscle, teams should feel comfortable kicking him inside to a 3 technique on passing downs or even play as a “big end” in a 4-3 under defense. This kind of versatility is important as the defensive line position typically likes to have a steady rotation, keeping those big boys fresh in the 4th quarter. Ideally, if you can pair up Rousseau with a sharp defensive mind who likes to get creative on blitzes, you could see him line up in a variety of ways.

Normal human beings at his size should not accelerate as quickly as Rousseau does. I expected some clunkiness or some awkward movements in his game based on his size, but he moves almost like a basketball player. He has a quick first step and explodes at the drop of a hat. There were also times where he displayed nice wiggle around an offensive lineman, which is something you normally see from a smaller lineman or a linebacker.

When you’re 6-7, you’re going to have problems keeping your pad level low, which is particularly important for a defensive lineman. When he gets out of his stance he’s almost in an upright position, which is going to get you no penetration. This is a very fixable issue and any good defensive line coach will work extensively with him to improve on his technique. It will take some time to correct this issue, as a problem like this isn’t fixed overnight. Old habits die hard, but this habit has to be nipped in the bud.

Way too often, Rousseau gets overpowered. It’s tough to play defensive line at his height and weight (6-7, 253 pounds), so he will need to gain a considerable amount of weight. If he can get to around 270 pounds roughly, he’ll be able to push back and his high pad level won’t be as big of an issue. He’s still young and relatively inexperienced at his position, having played a plethora of positions in high school. Give him time to mature and he’ll grow into his “man body”.

There’s still a lot of work to be done with Rousseau if he wants to become a complete player. Right now he gets by with size and athletic ability alone, but that won’t make you a superstar in the NFL. At worst, he becomes a pass rush specialist in the NFL and carves out a nice and long career. However, if he gains strength and becomes a better football player, he could become a cornerstone piece on a defense for the decade-plus.