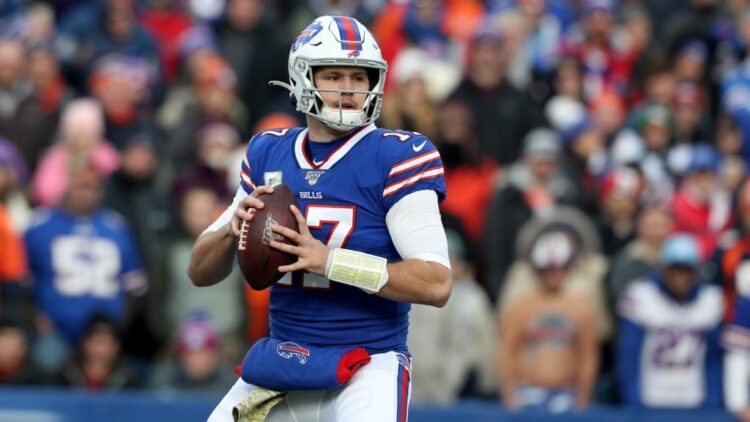 ORCHARD PARK, NEW YORK - NOVEMBER 24: Josh Allen #17 of the Buffalo Bills holds the ball during the first quarter of an NFL game against the Denver Broncos at New Era Field on November 24, 2019 in Orchard Park, New York. (Photo by Bryan M. Bennett/Getty Images)

After a shaky start to his career in 2018, Josh Allen made big strides in year two with the Bills. Buffalo made it back to the playoffs and Allen cut down on the interception rate, dropped his bad throw percentage by 5.7%, and gained 510 yards on the ground. Allen showed really good understanding of blitzes, made good decisions and reads, and actually showed good touch on a lot of throws. He struggles a bit with anticipation but he moves through full-field reads with ease and he has the arm strength to push the ball into windows despite his lack of anticipation. However, his 58.8% completion percentage was dead last in the NFL and it was that low for a reason. His mechanics are wildly inconsistent and lead to a number of accuracy issues. He might be deciding to throw to the right guy, but getting it there reliably is a whole other issue. He’s reading like he’s Peyton Manning and throwing it like he’s Brock Osweiller.

Usually these things happen in reverse and young quarterbacks have the physical tools but can’t read defenses. In this case it seems to be the opposite. His mind is recognizing things faster than his body can respond and because of that, his footwork goes out the window.

Despite a growing reputation as a scrambler, Josh Allen does a really good job of keeping his eyes up when he gets out of the pocket. Because of his supreme arm strength, it doesn’t matter which direction he’s rolling to or scrambling to. He can throw to just about any spot on the field – across his body, deep, short, it doesn’t matter. If you’re open, he’ll find you. He shows good patience allowing defenders to flow and stays calm when outside the pocket.

He definitely can put a little too much heat on some throws but that doesn’t mean he isn’t able to take some velocity off and drop balls over linebackers or let receivers run under throws. It’s something he’ll continue to have to work on but from year 1 to year 2, he’s improved his touch throws a lot.

Allen does a good job of getting through his reads and understanding the framework of the defense. He’s rarely confused and makes really solid decisions. Here you can see him key the flat defender and look at the quick out to Beasley before going to the corner behind. This is really supposed to be a rub route to the flat to Cole Beasley here by the Bills with the receiver that’s on the line of scrimmage working to rub his defender and prevent him from chasing to the flats. Instead, though, the Texans switch and the outside corner comes to crash on the flat which leaves the corner route open with a ton of leverage on the inside defender and no safety help. Allen recognizes the defensive framework, who to read, and delivers a strike.

Little nuances like this play against the Texans shows that Allen is really dialed in mentally which is super encouraging. Out of empty, teams often like to blitz with the inside slot defender since they’re stacked close to the line and there’s no extra protector to help out. That’s just what Allen is looking for. As the ball is snapped he gives a quick peak over to the slot corner to see if he’s blitzing and if he can throw hot to that side. When he sees the corner run in coverage, he comes off it and back to the slant on the other side.

He’s got all the mental tools, we know he has the arm, so why is he missing throws and what are the issues holding Josh Allen back? To put it bluntly, his lower body mechanics are really bad. He is so inconsistent with his footwork it’s almost impressive. His base tends to be really wide, he struggles to line up his legs and feet with his throws which prevents hip rotation and accuracy, his drop is almost never synched up to routes which forces him to bounce in the pocket and cause vertical accuracy issues, and whenever his footwork is rushed or when he’s trying to get the ball out fast, his base crumbles.

You can see here he’s mentally processing everything and his eyes are moving through his progression, but his feet are staying. He’s finding the right route but he’s not ready to throw it.

His biggest issue is not lining up his feet to receivers. When you aren’t lined up to throw, it makes it incredibly difficult to have consistent accuracy. You can see here how he’s aimed directly down the middle of the field and trying to throw to his right. It’s tough to get any hip rotation and sound lower body mechanics from this position. You’re off balance with no platform to make the throw from. As a result, the ball sails high.

You can see again how he’s misaligning his feet and stepping horizontally instead of at his receiver. His feet are pointed towards the sideline and he can’t get his hips into the throw and the ball goes into the ground. He has the arm talent to make these throws but without a consistent base, it’s hard to have good ball placement from a down to down basis.

This especially crops up when he’s running RPOs or quick throws. On most quick passing schemes he does a backpedal drop which usually results in him being off balance. He’s falling away from throws, can’t plant with his back foot, and ends up being more inaccurate than not.

When you have no platform to push off and deliver form, you’re relying all on your arm to make the throw as your body is trying to compensate for the momentum and mechanics of your throw. Balls will end up high, low, or behind receivers a ton on these quick throws.

It’s all about the feet and the feet aren’t matching the routes or where he’s throwing. The few times he does a pure dropback, he throws on time, with anticipation and looks really good.

The problem is that’s the exception and not the rule. 90% of the time he does a skip drop where he’s sitting and waiting for receivers to get open or is in the middle of hopping when receivers are coming open. It’s just not good football and not playing within the system and is equal parts to blame on Brian Daboll the OC. You can see that by the top of these drops almost all the time receivers aren’t even looking and Allen has to wait or come off his read. Combined with Allen wanting to see stuff open instead of throwing with anticipation and it’s a recipe for poor mechanics and mistimed throws.

He can also be a little quick to bail from pockets and makes very large moves when he is in the pocket. There isn’t much subtly. He doesn’t need to be Tom Brady with small side steps and movements, but it does get a little wild sometimes and he moves himself into pressure when he is perfectly safe inside the pocket which causes him to miss throws or run into sacks.

Josh Allen is far from a polished quarterback but there is reason to be optimistic in Buffalo. He’s making good decisions and mentally is clearly capable of being a top quarterback in the NFL. The mechanical issues and footwork are a huge concern and if they don’t get fixed, he’ll never be a consistently accurate quarterback. With offseason work and time dedicated to targeting and fixing his wide base, pointing his toe, and syncing his drops with route concepts, you could see a quick turnaround for Josh Allen. We know he’s there mentally and has more than enough arm talent to succeed. Once he puts it all together we may be looking at a quarterback that runs the AFC East for the next 10 years.