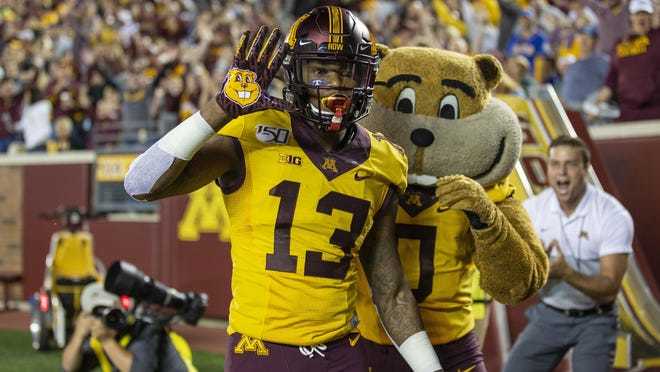 Rashod Bateman made the wise business decision by opting out of the 2020 college season in order to prepare for the 2021 draft. He was a key member of the Minnesota football resurgence in 2019, a team that won 11 games and finished ranked in the top ten. Bateman is a prototypical possession receiver who seems to make at least one big play a game that helps his team win. To keep it simple, he’s a football player and does all the little things well. Could he have used one more season? Of course, but with all that’s going on this was the best decision for his future. I would say he’s more than likely a late first-round pick, but a good combine would shoot him up the board.

While he’ll never be mistaken for an Olympic sprinter, Rashod Bateman is dynamic after the catch. He’s tough to bring down due to his toughness as a ball carrier and his resiliency. When I say he’s a football player, it shows up when the ball is in his hands. There are many times where he should have been tackled, but refuses to go down. He also has a high football IQ and sees the field well, which makes up for his lack of speed. I made this comparison on our Twitter, but he reminds me a lot of JuJu Smith-Schuster after the catch. Neither are dynamic athletes but are true football players who make things happen with the ball in their hands.

Rashod Bateman will make a killing at the next level over the middle, which isn’t a place on the field where many receivers want to be. In the middle of the field is where most of the heavy hitters on defense are and there are going to be many times where you have to prepare to take a big hit. Bateman caught many of his passes on slants and dig routes (which we’ll cover later) and he never shows any hesitation or have what some call “alligator arms”. In addition to his toughness, Bateman is a smart player. Since he runs so many routes over the middle, when he notices things breaking down for his quarterback, he’ll make himself more easily available. I see a lot of receivers, at all levels, stick to their route and not come back to the quarterback. This rarely happened with Bateman, as he has his eyes on the quarterback and will go get the ball no matter the cost.

Like I mentioned earlier, Rashod Bateman runs a lot of routes over the middle and runs them very well. He’s great at fighting off press coverage and uses his body to his advantage to get inside and open. Once he’s established himself on those routes, he’ll run a double move and get open deep. At the next level, he’ll be a great possession receiver who will be a quarterback’s best friend on third down since he can get open on intermediate passing situations. Even though he’s opting out of this season, he’s a relatively pro-ready route runner who will be able to step in and produce.

Pushed around on deep routes

For being so physical on short and intermediate routes, Rashod Bateman struggles to get separation on deep routes, more specifically go routes. A go route, or a fly route, is essentially just the receiver going straight down the field. On this route, you want to gain separation from the corner, while also giving your quarterback a spot to throw you the ball. So, it’s imperative to not let the corner push you towards the sideline too much because then there’s a tiny window to fit a long pass into.

Bateman several times couldn’t gain that separation going deep unless it came from a double move or a lapse in coverage. This is a speed and agility issue that needs to be worked on over the next several months of draft preparation. There were times where he had a lot of green grass in front of him and was tracked down by defensive backs and that’s due to his lack of breakaway speed. He has several months to work on his 40 yard dash time, so this issue can be hopefully taken care of.

I don’t think Bateman will ever become a superstar, but I see him being a good player for a long time. He’s a guy that doesn’t rely on his athleticism to do well, which bodes well for his longevity. I would almost be surprised if he didn’t have multiple 1,000 receiving yard seasons when it’s all said and done as long as he’s with the right quarterback. He’s more than likely never going to beat you deep but will kill you in a west coast system or one that relies on a short and quick passing game. Like I said earlier, I think he’ll still be selected towards the end of the first round with teams like the Saints or the Ravens being great fits.