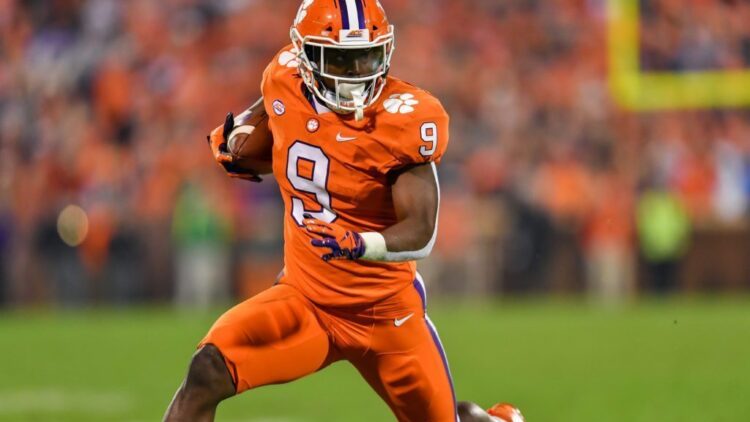 Back to back 1600 yard rushing yards has put Clemson’s Travis Etienne on the map as one of the best running backs in the nation. Many experts believed that Etienne would declare for the 2020 and be one of the top backs in the class, but decided to go for one more national championship run for the Tigers. He had moments where he looked like the best player on an offense full of NFL caliber talent and scored in all but two games in 2019. He plays more of the Robin to Trevor Lawrence’s Batman and because of that, it allows him to fly under the radar when he is an immensely talented player. While he does have a few things to work on, his draft stock is unlikely to rise too much, but the chance to win a second championship is tough to pass up.

Etienne has seen his catch total rise every year, with him totaling 37 in 2019. He does have the advantage of being paired with a skilled quarterback and a spread offense that allows him to get open on short routes. Once he gets the ball in his hands in open space, he is a shifty runner and has great vision that allows him to gain big chunks of yards. He also holds his own for the most part as a pass blocker but will have lapses where he looks average in this department. I think of all of the running backs in this class, he could be the most versatile and dynamic in the passing game.

While I don’t think he has great long speed, his short-area explosion is off the charts. I am looking forward to looking at his five and ten yard splits at the combine as on film it looks like he’s elite in terms of quickness. Most coaches value short term acceleration rather than long speed, so I suspect that Etienne will be highly coveted and RB1 for most teams. He has quick feet and utilizes this to get the edge on outside runs, which makes him able to run any route or succeed on any carry.

Coaches at every level say, “Always keep your legs moving” and Etienne is a textbook example of that. He is a tough runner despite not being a “big” back and will rarely go down easy. He’s a downhill, north-south runner who will get you any yards that he can. It seems like many runners are more about finesse nowadays, relying on speed and craftiness rather than running through a defender. In the open field, Etienne is especially hard to bring down because any arm tackle that comes his way will be easily broken.

If Etienne wants to be an effective runner at the next level, he needs to trust his blockers more and be more patient behind the line of scrimmage. Too often he would not let the play develop and end up running right into a crowd of defenders. It seems like he gets too excited or just lacks a feel of his surroundings. He could also be a lack of vision he displays as there were a few times were a cutback lane was open, but Etienne moves too quickly and misses that chance. Hopefully, he can develop into a more well-rounded running back and trust his linemen to do what they are supposed to do.

Is he a product of Clemson’s offense or would he be great on any team? No one knows, but I do feel like he is the beneficiary from having a star like Trevor Lawrence as his quarterback. Defenses will gladly let him beat them while focusing their efforts to shut down Lawrence and the passing attack. This doesn’t mean he’s a scrub or not worthy of his success, but it’s something that I think you have to taken into account when watching his film.

Etienne has probably the highest floor of any running back in the 2021 class but might not have the highest of ceilings. His draft stock is unlikely to change to be honest, but there are still plenty of things to work on. I have three running backs (Etienne, Hubbard, and Najee Harris) all clumped together with none being the clear cut top guy in this class at this point. If Etienne can further develop his feel for the position and can become a more patient running back, he can sneak into the the first round and could be a relatively high pick. He can play in any scheme and he has the one thing you can’t teach, which is being a winner.