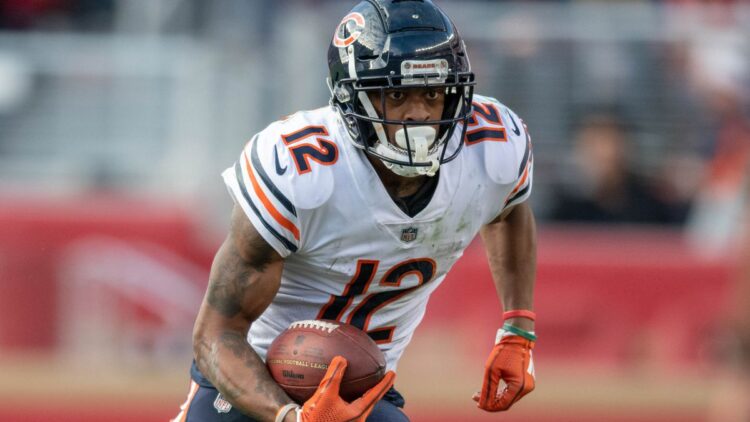 Allen Robinson has flown under the radar with the Chicago Bears but he’s hard to miss once you turn on the film. In 2019, he had 98 receptions for 1,147 yards, was the 5th best receiver on contested catches, and is one of the more nuanced route runners in the NFL. As you might expect with winning contested catches, he has great body control, attacks the ball in the air, and is physical at the point of the catch and that’s all great, but he didn’t even need to use that ability very often. He has a great feel for finding open zones and sitting behind flowing linebackers, he always has a plan of attack at the line of scrimmage, and he consistently sets up defensive backs to open himself up. It doesn’t really matter whether he’s working against zone or man coverage. He shows high football IQ and understands of how to manipulate defenders within the framework of the defense.

It might seem simple but he does a great job of working off flowing defenders in zone. It takes an understanding of what defense you’re looking at to understand who to work off of and where the soft spot in the zone will be. The Broncos here are running a variation of cover 6 with an initial inside out bracket on Allen Robinson. Cover 6 is a combination of both cover 2 and cover 4. So to one side of the field you have cover 2 with a deep half safety and a corner in the flats. On the other side of the field you have two deep safeties taking deep quarters. The Broncos nickel corner is aligned pretty deep to bracket the first vertical route that appears to dissuade any inside release before he comes down to the flat. As soon as that defender flows down, Robinson breaks off his curl a yard past the sticks for what would be a first down on 3rd and 8. Not an easy concept and coverage to read and diagnose on the fly but Robinson shows good understanding of the down and distance, coverage, and who to key off of while he’s running the route.

He reads these defender keys incredibly quickly — especially in the underneath game. As soon as flat defenders run by him and clear space behind, he immediately snaps off his route and sits down. You can see as soon as the ball is snapped here he looks at the nickel back who has flat responsibilities. As the defender takes steps towards the flats to cover the running back, Allen Robinson sits immediately behind him in the soft area of the zone coverage for an easy completion.

It’s a simple concept, but it makes for efficient football and it’s a really easy and basic read for the quarterback. It demonstrates an understanding of what’s going on, film study, and is part of the reason why he was able to get almost 100 receptions on the year.

Even if he’s not sitting or snapping his route off, he uses the flow of defenders to signal when to look for the ball and when he’ll be open. Here, the Packers are doing a late rotate by bringing one of their safeties down. As soon as the safety clears him towards the flats, he turns his head expecting the ball. He knows the window where the ball will come to and is prepared and is processing these things incredibly fast.

So, he understands how to defeat zone but to be an elite receiver, you have to be able to win against man and be able to attack man concepts within zone coverage.  His ability to win contested catches and attack the ball certainly help him here and he’s not afraid of taking a hit. He has elite body control along the sidelines and is great at high pointing the ball.

Where Allen Robinson really separates is with his releases and his work in his route stem and breaks. He has a variety of releases that he uses for different situations and defenders and while most receivers have an “A” release and a “B” release that they use most often, Robinson is pretty diverse in his combination of releases. He’s really good and quick at giving a good slide or skip release that pushes the defender opposite of the way he intends to break. He uses this a lot when defenders are walked up on him but aren’t pressing. He works that release right here which gives him more route side space and gets him up on the toes of the DB. The closer he gets to the defender, the less cushion and time they have to break on the route. So if you’re gaining ground AND stemming outside, it’s really hard for guys to recover. He does an excellent job of staying low on these releases too. Once your body sinks, DBs key on that and your hips to help them break on the ball more quickly. By staying at the same level the whole route, he takes that read key away.

Now, once he’s set up that quick stem release, he can work a double to get to a fade which is what he’s doing here. He’s getting up on the defenders toes, stopping their feet with the first jab, and keeping his hips pointed vertically. Keeping his hips vertical allows him to maintain speed and explosiveness while the defender has to turn and run with him.

This stemming concept and pushing defenders away from route-side space doesn’t have to be at the line of scrimmage either. He also uses it when he’s into the route and facing off coverage. Here he pushes the defender inside and gives a jab which opens up more space for him to operate on the outside while simultaneously removing the defenders hand and then working to stack on top of him before breaking off to the corner.

Sometimes he’ll just use a bench release and overpower defenders if they’re close enough to the line of scrimmage and he needs room to operate.

He also uses this at the top of his routes with subtle pushes to use the defenders momentum against them and create space for himself. Once he gets an inside release he then leans back outside to create contact with the defender and give himself leverage. In sync with his plant and burst, he also chicken wings to push the defender and propel himself the opposite direction.

He does this horizontally but he can also do it vertically on curls and comebacks. He sells vertical really hard and on his breakdown to come back to the ball, he also pushes the defender by to create that extra separation.

All compiled into one here, the Raiders are running cover 6 just like the broncos were earlier and Allen Robinson is working on the outside corner. It’s a designed double move so he has to sell post and he knows he will get help from Chase Daniel with a pump fake since it’s zone coverage and the defenders will have eyes on the quarterback. With the DBs eyes in the backfield and only having the Robinson in his peripheral vision, Robinson works up on to his toes and into his field of vision before giving a hard shoulder and head nod. Since he’s gained ground and is on the DBs toes, the defender has less time to recover as he converts to a fade. The defender isn’t in terrible position but Robinson is still able to high point and attack the ball in the air and get two feet down.

Allen Robinson is a pretty polished and complete receiver but there were some weird instances of a lack of effort scattered through the film. He’s a more than willing and capable blocker most of the time and uses his length and size to overpower corners and drive them out of the play.

But then in the Broncos game you get plays like these from him where he’s just 100% not wanting to participate in the play at all. He’ll make no effort to block and run right by guys when the play is coming at him.

He literally jogged an entire route while not once looking back for the ball or making himself available for the quarterback. Even if he’s a designed clear out there’s no play on planet earth where you jog 20 yards downfield and don’t turn around on a pass play

Again here he’s running half speed and doesn’t once look back for the ball or to adjust to the quarterback.

It’s wildly confusing because it contradicts everything else he’s put on film. He’ll block, run hard, is disciplined with his route running and is clearly a dedicated player that comes prepared every week so it was surprising to see a whole game where he looked like he had no interest in being there. The good news is these types of low effort plays didn’t pop up much in other games throughout the season.

Allen Robinson is a complete receiver and it’s time for him to get some recognition. He’s incredibly technically sound, is a smart and efficient player, has great hands, and sells out for the ball. It almost doesn’t matter who’s throwing to him because he’s just that talented. As the Bears try to figure out who’s going to be behind center, there’s one thing that’s for sure: Allen Robinson is going to be open.