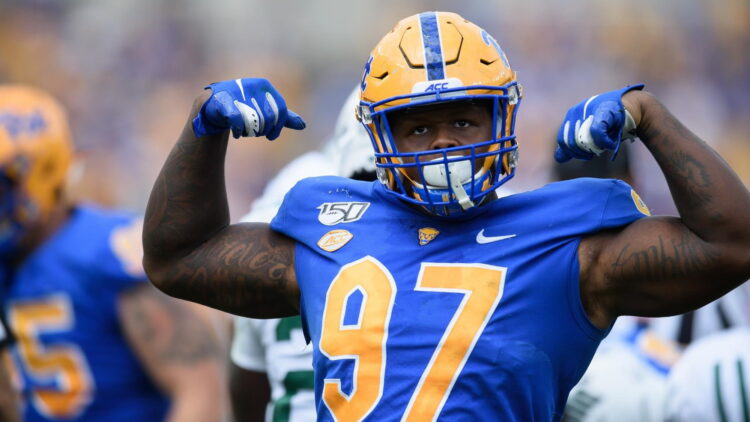 Jaylen Twyman wears #97 to honor former Pittsburgh Panther and current Los Angeles Rams superstar Aaron Donald. When you look at them, they actually look very similar on the field. Both undersized but stout defensive tackles that became All-Americans. Twyman is an exceptional pass rusher who totaled 10.5 sacks as a sophomore before opting out of the season to prepare for the 2021 draft. While he could have used another season of film, it was smart to not take any risk of injury and instead work out for the next few months in preparation for the combine and team workouts.

This is where Jaylen Twyman will make his money. His 10.5 sacks in 2019 was amongst the nation’s leaders for interior linemen. Oftentimes he was downright unblockable. His go-to move is a devastating swim move and an effective push and pull technique that allows him to get in the chest of the offensive linemen then quickly disengage by using his quickness. He rushes almost exclusively from the inside and didn’t see many snaps lining up over the offensive tackle (4 or 5 technique). He is good at stunts as well, but Pitt didn’t utilize stunts in their defensive scheme as much as they should have. Forcing pressure in the middle can rattle a quarterback and force them into making bad decisions, something that we see the best interior rushers do well. Twyman will regularly get pressures and even if they don’t result in sacks, they’ll change the outcome of the game.

If you’re an undersized defensive lineman, chances are you have above-average quickness. Jaylen Twyman, however, has doesn’t havejust above-average quickness, he has elite quickness that he uses to beat much bigger opponents. He explodes off the snap and has good wiggle for a 290-pound guy, which makes him tough for an offensive lineman to keep in front of. In addition to being quick, he can quickly diagnose plays and rarely will make the wrong read. Teams in the NFL run a lot of play-action and RPO’s, so being mentally strong is almost as important as being physically strong.

There’s one thing you can’t teach, and that is heart. Jaylen Twyman has plenty of that and you see it every snap he’s on the field. He will give 100% on every play and hustle to the ball, never giving up on his teammates. This kind of behavior is infectious and will make him a role model on whatever team selects him.

Despite being on the shorter side, Jaylen Twyman has a lot of issues with his pad level. Keeping your pads low helps you get leverage, which on the defensive line is very important. At times, Twyman would stand straight up after the ball was snapped, which makes it very difficult to gain any penetration. Some guys are very successful despite playing high, but they’re either much taller (thus more arm length to use for separation) or stronger than Twyman is. This can be fixed through repetition and coaching, but it’s something that has to be changed soon.

I don’t doubt that he’s a strong person, but he gets pushed around way too easily in the run game. Rarely does he push the offensive lineman into the backfield and he is usually either stood up or driven backwards. At this point, he’s more of a pass rush specialist because he would be a liability as a run stuffer. The high pad level is part of this problem, but he needs to build more strength if he wants to be an all-around lineman as a pro.

While a few of his moves are excellent, his counter moves at this point left a lot to be desired. When his swim or push/pull moves are stopped, he doesn’t have anything to counter that with. These moves may work most of the time, but if you want to be a high-level pass rusher at the pro level then you need to add more tools in your toolbox. He’ll try a spin move on occasion, but didn’t have much success. I think gaining more strength would also help with this as it could give him a better bull rush.

Right now Twyman can do what teams covet, which is getting to the quarterback. He’s going to be an impactful rusher from day one, which is going to be very appealing. He still has a lot of work to round his game out which makes guessing where he will be selected at a tough one. I’d expect he’ll range anywhere from the mid-teens to the second round and his combine performance will play a huge factor in this. He’s probably best off as a traditional defensive tackle in a 4-3 defense, but could possibly fit as a 3-4 end despite not having the desired length.