How Sean McVay Put Together a Masterful Game Plan vs. the Cowboys 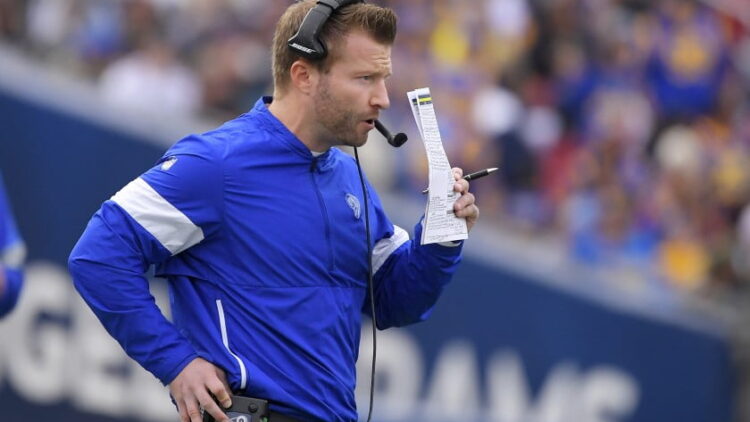 The Rams opened up their season in a new uniform, a new stadium, and as home underdogs. Going against a Dallas defense that has one of the best fronts in the league with Everson Griffen joining DeMarcus Lawrence, Dontari Poe, and Aldon Smith, the Rams and Sean McVay had a tall task in front of them considering their offensive line ranked 31st in 2019 according to PFF. McVay put on a game planning clinic that attacked the Cowboys’ aggressive and talented front with his use of outside zone, pre-snap motion, and screen game. The Rams were able to rack up 422 yards of total offense including 153 on the ground.

If you prefer to watch a video breakdown, scroll to the bottom of the article.

The Sean McVay offense struggled at times last year with the issues on the offensive line and became a little one-dimensional with the use of 11 personnel 72.7% of the time. While it seemed like the McVay offense had stagnated and perhaps been “figured out”, the Rams showed that was far from the case in week 1 as McVay used layered plays that built on each other through drives and through the game. What can make McVay’s offense so difficult to defend against is that everything looks incredibly similar.

Sean McVay started off the game with exactly that premise in mind. A big misconception is that you have to run the ball well and run the ball often to set up play-action. Data shows that that just isn’t the case. Play-action is impactful and effective regardless of your ability to run the ball. So, known for being an outside zone team, McVay started off the game with a naked bootleg off of that outside zone look. You may notice right off the bat that the Rams are in 12 personnel with two tight ends which is already a departure from their base 11 personnel from 2019.

Almost all of the play-action off of the outside zone that McVay runs ultimately looks the same. All he’s doing is creating a flood concept to one side of the field. That just means that there are three receivers at three different levels. One in the flats, one intermediate, and one deep which usually acts as a clear out and opens up space for the crossers and flats underneath it. The quarterback reads from one in the flats, to two as the crosser, and then 3 or an alert for the deep ball. If there’s someone in the quarterback’s face, it’s usually the flat defender, so they’re taught to immediately dump it off to the flats because that means there is nobody there to cover.

The Cowboys are in match cover 4 here which at its core originated with Belichick and Saban back in Cleveland. The corner is matching the #1 receiver and carrying them if they go vertical. If the receiver, goes inside under 5 yards, he lets him go and they’re picked up by an inside linebacker. With the motion, that means that #27 is matching vertical with the tight end, who is running the clear out. With that corner matching vertically, the safety to the play-side then has to locate any crossing routes or the number three receiver from the backside coming to his area of the field, which in this case is the tight end.

To the top of the screen, the #1 receiver who is covered by the corner and who has the same vertical match responsibility, is crunching across to sell a block in outside zone. That qualifies as being under five yards – which means he would pass it off the linebackers to pick it up – namely Jaylon Smith. However, with Smith and all the linebackers flowing incredibly hard to the run action, nobody is left to cover Robert Woods in the flats. Woods is wide open and easily picks up a nice gain with nobody there to pick him up in coverage. And all this happens without ever establishing the run first. This is the first play of the game and is setting the table for what Sean McVay wants to accomplish during the game.

To follow that up, Sean McVay runs the exact same formation, with the exact same pre-snap motion, but it’s now to the same side as the outside zone. This is to create as much horizontal flow as possible in the defense. If you look at these two plays synched up, they look exactly the same at the time that Goff is extending his arm for the handoff. So as a defense, you’re put in an incredibly difficult spot. The Rams just ran this same look and got 20 yards on a boot action but if you stay home or over flow to the jet motion and potential play-action, you’re leaving open gaps in the run game for their outside zone. That’s what the whole system is based on. Have your bread and butter play, then work counters, then work counters to your counters.

The outside zone stresses the defense and their ability to run sideline to sideline. The running back is aiming for the outside leg of the play-side tight end and reading the down linemen from the outside in. Backs are taught to take five steps and then they have to get vertical. If the outside end seals off, the running back shifts his vision inside sequentially until there is an opening. Even if you’re not getting a ton of yards off of it, you’re forcing the defense to flow and react which then builds into McVay’s next play-call. A screen to the jet motion.

This time, Sean McVay calls the same jet motion with an outside zone fake to the same side just like the previous play. He releases the playside receiver on a deep over route just like we saw from the tight end in the first play of the game. It’s common to drag that guy from the backside on these naked boot actions to force defenses to transfer zones as they go across the field. So Sean McVay is giving every tell possible that he’s running that same bootleg that he ran to open the game. A small little nuance is that you can also see Goff short change the play-fake. He sticks out the ball but doesn’t nearly get to the stomach of the running back and pulls the ball away early. This is because he wants the defense to see that it’s a run fake and boot action. They’re showing the same deep over, they’re showing the same run  action, and they want the defense to flow the other way to that boot because now they’re going to screen to the jet motion that is sitting all alone in the flat.

Both the corner and the safety run with the deep over leaving nobody on the left side of the field. The center and two guards release and it’s all open field for Robert Woods. So again, now we’ve seen three different things from the Rams that all look almost exactly the same from a blocking scheme standpoint, from the running back track, and from the quarterback run action.

These same looks continue to build throughout the drive and throughout the game. They then run the same tight ace formation with three receivers and give the same run action and run the actual boot this time. Again you have someone deep, someone crossing from the backside, and someone in the flats. The quarterback reads flats to crosser to deep and since nobody is covering Woods in the flat, it’s an easy dump off. This is Sean McVay’s system at work.

They cap their opening drive off a few plays later with a touchdown on an inside zone that works as one of their run game counters to get vertical movement instead of the normal horizontal flow of outside zone.

From there, the looks only build. Later in the first quarter, they run a similar screen that they did to the receiver on the jet motion but now they throw it to the running back off the same outside zone play-action look. Again, they run their receivers using the typical flood route concepts with one clear out, one intermediate, and one in the flats. Off the fake, Goff wheels around to throw the screen to the running back that he initially faked the outside zone too. The defense flows with the bootleg and leaves a whole lot of green grass for the screen.

In the 3rd quarter they also ran the same look but threw the screen to the sniffer who they also used throughout the game in pass protection, leaked out on boots, and used in run blocking. Everybody is fair game to get the ball and that stresses defenses to cover and stay home while simultaneously respecting the horizontal stretch and flow from the outside zone.

Sean McVay protected his offensive line with quick pass game concepts out of empty and shotgun and then using play-actions and screens to slow down the rush. Throw in some hard counts and he was able to mitigate the impact of the Dallas front seven.

While the defensive line was its own issue, the Rams still had to deal with a really good linebacker in Jaylon Smith. They rarely end up giving the ball on jet sweeps and orbit motions, but once is really all it takes to force the defense to stay honest. As soon as a defender isn’t holding that edge or the linebackers aren’t respecting the motion, the Rams will give on the jet sweep or run those naked boots. It’s their way of keeping that unblocked defensive end in check and keeping the linebackers honest.

As soon as you show the give once, defenses are more willing to move with and respect that motion which opens up lanes and causes issues with gap integrity for linebackers. All that jet sweep is intending to do is pull one and a half guys. If a linebacker takes a step out of position, that gives the line a beat longer to be able to climb up and seal them off for big gains in the run game.

Sean McVay’s offense builds. It looks very similar, gives false reads and window dressing, and forces defenses to stay disciplined. He came in with a plan against the Cowboys that stayed true to his philosophy while simultaneously adapting to his personnel, addressing issues with predictability in 2019, and attacking a strength of the Dallas defense. His use of 21 and 12 personnel grew, he protected a line that was a weakness in 2019, and he built layers to the offense and called them at the perfect time. If McVay continues to grow and adapt and that offensive line starts to gel, the NFC West better pump the brakes on crowning the Cardinals, Seahawks, or 49ers, because the Rams are coming for another Super Bowl run.