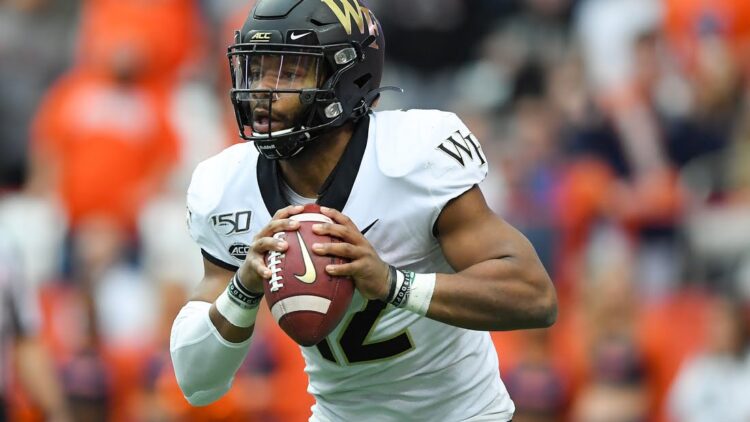 After announcing that he was transferring to Georgia from Wake Forest, Jamie Newman became a name to look out for in the 2021 draft as someone to possibly sneak into the first round. However, due to concerns over COVID-19 and tough competition from fellow transfer J.T. Daniels, Newman decided to opt-out and prepare for the draft. Newman is currently QB4 or 5 in this class but could have seen his stock elevated with more tape against elite defenses. He has all the physicals tools to become a starter in the league, but still needs a lot of work. Despite this, there’s still a good chance he will be a Day 2 pick as long as he can impress teams in workouts and meetings.

One thing that really impressed me about Jamie Newman’s game was his strong arm. He’s not afraid to push the ball down the field and lets it rip with the best of them. On deep balls, he gets enough loft on his throws that allows the receiver to run under it. Then, on out routes and other passes outside of the numbers, he displays good velocity that enables the ball to get there before the defender can get a hand on it. Despite his game having a lot of questions, his ability to make long throws and stretch the defense out isn’t one of them. Pro Football Focus had Newman has the highest-rated deep-ball passer in college football in 2019, so the advanced analytics support the film.

One skill that sets apart good from great quarterbacks is how they can throw in the pocket. Jamie Newman is one tough cookie and even if he feels the blitz closing in around him, he’ll hang in the pocket and deliver the throw. He completed 48% of his passes when under pressure, which may seem low but was well above the NCAA average. Due to his sturdy build, he can absorb hits better than a smaller quarterback. Because of this, he will hang in the pocket for as long as he needs to and find the open receiver.

While he may never be mistaken for a world-class sprinter, at 6’4 230 pounds, he offers versatility as a ball carrier. Wake Forrest runs a lot RPO and zone-read where Jamie Newman is asked to run the ball several times a game. He typically won’t run unless there’s a lot of green grass in front of him, but in the red zone, he was used effectively as a short-yardage grinder. He’ll lower his shoulder and run guys over on his way to a score. This is a vital part of his game and the possibilities open up as the field gets shorter.

Ball placement is so important for every quarterback, but it’s the biggest concern in Jamie Newman’s game right now. Simply put, he struggles to make the throws that someone of his skill level should be making no problem. It may be a case where his arm is too strong and he has trouble controlling it. This is a very troubling trait and he needs to spend a lot of time correcting this before he can see meaningful NFL snaps. Since he’s so talented and seems to feel comfortable in the position, there is hope that this can develop and improve. But, as it stands, it’s going to be the main reason he won’t be hearing his name in the first round.

Eleven interceptions may not seem like an eye-popping number, there were too many times where he blatantly made the wrong throw. He has a tendency to stare down a receiver too long and not pull the trigger quick enough, which allows the defenders to get in place to make a play on the ball. Part of this could be coaching directing him where to look. As a first-year full-time starter, mistakes will happen. It would have been good for him to get more snaps so he could improve upon this, but he’ll just need to spend more time in the film room these next few months doing mental reps.

Wake Forrest’s offense is… unique. It’s almost all shotgun based and utilizes 3-4 receivers on every play. Then, they’ll run a lot of zone read and RPO, but it’s really slow-developing and this style wouldn’t carry over to the NFL where the game is much quicker. Jamie Newman will have to practice more traditional formations and plays in order to help his development.

Like almost any prospect, Newman has had his shares of ups and downs. His talent is very intriguing, which is why I currently have him in the lead for the QB4 spot. It’s unlikely that he gets any higher than that, but to his benefit, quarterbacks almost always rise come draft day so he should still get a relatively good draft slot. Whoever picks him must be patient with his development and allow him to sit a few seasons before putting him in starting contention.