The Green Bay Packers are 2-0, have over 1,000 yards of offense, and have scored the most points in the NFL through two weeks. Matt LaFleur has integrated more schemed looks and plays to keep Rodgers on rhythm and he’s looking every part of an MVP candidate. They’ve run 74 pass plays, and 13.5% of them have been the Mesh concept or a move off of the Mesh concept. On these plays the Packers offense and Aaron Rodgers are 9/10 for 105 yards and two touchdowns.

At its core, the Mesh concept is a man beater, with two shallow crossers that are rubbing defenders and forcing them to navigate through traffic. It stresses the defense horizontally and provides an easy completion with room to run after the catch. It’s a simple play, but how the Packers offense gets there can differ from snap to snap. It can be used to get a running back into the flats, exploit match-ups on linebackers, and force the defense to communicate on switch calls. Matt LaFleur has done a great job of setting it up and creating formations that prevent it from being predictable and that have attacked defenders in space while getting the ball to his most dangerous players.

So far, the Packers have almost exclusively run Mesh against man defense and called the concept on shorter down and distance with the greatest yardage to go being a 3rd and 6 against the Lions. To make the concept work you have to be able to get your two shallow crossers to intersect and pop out of the other side of the formation in a reasonable time. As a result, you see a lot condensed formations or tight splits from the receivers when you’re running Mesh. Here the Packers are running Mesh for Davante Adams. In every call, there’s a player that is designated to go under and one that goes over. These crossers are what make the Mesh concept. The rest of the routes are add-ons or variations that teams can use to exploit different things in the coverage. So here, you have Davante Adams going under Allen Lazard. Lazard is going over and will be working to rub the defender trailing Davante. Lazard wants to force that defender to go over him and navigate traffic which creates natural separation for Adams underneath. 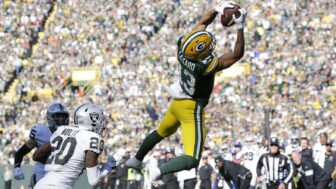 Layered behind that deeper rub, the Packers will often run a cross sit or spot route that acts as a secondary rub route and that can exploit zone coverage. It’s not a viable route to throw in man, but it creates another hurdle for defenders to navigate over to get to the shallow drag on the other side of the field. You can see all the traffic that the defender has to get through to be able to track that shallow drag down. Without a jump call from the safety or a linebacker to help pick it up, it’s almost impossible. Usually, as far as the reads go, the quarterback should be looking at the initial leverage of the defenders. If a defender has outside leverage, meaning they’re lined up outside of that receiver, that’s usually the guy you want to get the ball to in the Mesh concept. It’s just more distance for that defender to close on and catch up.

While Davante is clearly wide open on this play, since you often call Mesh versus man, you are also guaranteed some one-on-one matchups outside with your Mesh add-ons. Here, Rodgers likes the matchup outside to their tight end Jace Sternberger and chooses to take the shot on the fade with one-on-one coverage. For me, it’s a bad read with a larger safety on your tight end and what ends up being a double A gap blitz from the Vikings. With no linebackers in the middle of the field to jam up the drag, it’s even more open than normal. Rodgers needs to recognize this and get off that read and get to the designed concept when Jace doesn’t win off the line.

The Packers obviously saw how open Davante was because a series later, they call the same Mesh concept out of the same formation and get a nice gain out of it. It’s the exact same down and distance – 2nd and 5 — and the Vikings give the exact same double A blitz. The rubs on the defense aren’t as clean, but it’s still an explosive play as defenders have to navigate traffic and make a tackle in the open field.

Now in a short yardage situation on the five yard line where the Packers are again seeing man, the Packers run Mesh out of 12 personnel with two tight ends. This time though, Vikings safety Harrison Smith recognizes the Mesh and comes down to pick up Davante Adams. However, the Packers want to work the rub to the running back at the bottom of the screen with an automatic release which they hadn’t done in the previous two plays. The base routes are the same here but Robert Tonyan has to understand the concept and what he needs to accomplish to make it work because he messes this play up. Normally, he’s running that cross sit to impede the flowing defender over Davante Adams but when a running back is releasing to your side, you have now have to rub the defender responsible for the running back because that’s the guy you want to attack here. He needs to get in front of Eric Kendricks and wall him off with his cross sit so that Jones has room to operate in the flats. Instead, he takes the easy inside release and rubs neither Kendricks nor the Safety that is robbing the drag on Davante Adams.

While the film starts in the middle a little late here, you can see how Tyler Ervin does a better job of rubbing the defender responsible for the running back here with his cross sit. He works directly up to the linebacker who is trying to flow and gives Aaron Jones space to work with once he’s caught the ball.

The Packers will also run Mesh out of an Empty formation with the goal to get the ball to Aaron Jones who is matched up with a linebacker. That’s a matchup you like if you’re the Packers offense even if you don’t have a Mesh or man-beating concept called up. Just like we saw with the Vikings, the linebacker has to flow over the top of one defender and then navigate a second rub from MVS and the result is Aaron Jones all alone in the flats.

The Packers have loved Mesh to the RB in goal-to-go situations these first two weeks. We have that same goal line concept we saw earlier with the Vikings where Tonyan didn’t rub the linebacker. Usually when teams see these tight split bunch formations with the RB on the same side, they’ll box it out. What that means is that the defender lined up close to the line of scrimmage here would take the first player to go out, the corner would take the second player to go out, and then the two inside defenders would progressively take the first in-breaking route and the second in-breaking route. That way you don’t have to work around these rub concepts when you’re in man. But, the Lions chose to stay with their straight man coverage and not switch assignments. The two inside defenders run into each other, Lazard does a good job selling a quick screen that forces linebackers to flow over, and Davante Adams runs a corner route which forces the defender to turn his back to the play. Aaron Jones is alone in the flats and walks into the endzone.

The only time the Packers offense ran Mesh against zone coverage was here. The Lions do exchange routes to the top of the screen. The corner has deep third and will take any deep routes, the defender in press is responsible for the first route to the outside, and the inside defender will carry the first inbreaking route. On the backside of the play the Lions have a lock call which means they’re in man coverage with the linebacker on Jones and their rookie Jeff Okudah on Marquez Valdes-Scantling. You can watch to the top of the screen as all the defenders transfer zones and how that now allows the cross sit to open up behind it. With defenders picking up the shallow drags, that leaves space in the middle of the field for Robert Tonyan. The linebacker to the bottom of the screen is late to pick up Lazard on the drag and Rodgers hits him for a good run after the catch opportunity.

To finish things off we’ll look quickly at two of the counters the Packers offense has thrown out there off of their Mesh concept. Both are pretty simple and really the goal is to make things look like Mesh, and then attack the space that that leaves after the defense reacts. Here the Packers are in empty with some more tight splits – an indicator that they might be running Mesh. They run the shallow drags with Jamaal Williams and Tyler Ervin except they convert what would be the drags and the mesh concept into two Whip routes where they push in like they’re running those drags and then bounce out. The hope is to get the defender chasing in man to over pursue to the drag and then get lost when they bounce back outside. It doesn’t work perfectly because the corner is playing off on Ervin and therefore has time to recover to the whip but the concept is there.

Lastly, while the full Mesh concept isn’t there to the bottom of the screen, to the top of the screen you have what looks like what the Packers beat them with for a touchdown earlier in the game. A corner from the receiver on the ball, a shallow drag by MVS coming in quick motion, and the running back flaring to the flats. The Packers offense is hoping all the defenders fly to those routes that they saw earlier in the game. MVS converts his drag into a drag seam which is trying to catch the corner coming down to chase the shallow drag and now turn up-field on him, the flat route by the running back pulls the linebacker out of position, and then Tonyan runs that corner route that Davante did earlier except he snaps it off for a corner stop once the DB is chasing him and he ends up wide open for a touchdown.

Mesh is a simple concept and the Packers offense is running simple variations of it but it’s incredibly tough to defend. By mixing up who is running what route, out of what formation, and what defender to target, the Packers are forcing defenses to adjust and react. Whether it’s the DB chasing across the field, a linebacker trying to transfer zones and pick up a receiver running full speed, or tracking a running back into the flats over traffic, the Packers are running Mesh and they’re running it with deadly efficiency. It’s only a small piece of the puzzle to what the Packers are doing but rest assured, if you see man coverage and a tight split from the Packers, your eyes better dial in and be ready because the Mesh will come at some point and good luck trying to stop it.