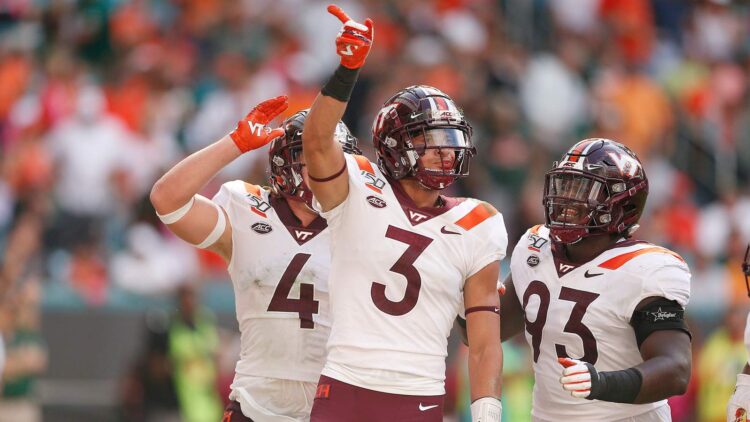 Caleb Farley was one of the first players to opt-out of the 2020 season to prepare for the draft and it was a move that made a lot of sense. He’s already entrenched as one of the top cornerback prospects in the class and was on a Virginia Tech team that doesn’t have national title expectations for the season. At the end of the day, you have to take care of yourself and your future. Farley is pretty inexperienced at the position, coming to Virginia Tech as a wide receiver, but has impressed in his two years as a Hokie. I think he’s solidly a first-round prospect due to his upside, but with a good combine and pre-draft process, should become the first corner drafted.

If you’re going to be a high draft pick as a cornerback, teams must believe that you have the chance to be a lockdown cover corner. While teams might value other skills like tackling or special teams versatility, it’s being able to shut down the passing game that will earn you your money. Caleb Farley might have the highest upside of any player in this class when it comes to being a great man corner. Being a former wide receiver, he anticipates routes and thinks like a receiver so he knows the nuances of the position. He has the speed to keep up with smaller, shiftier guys yet the length and strength to battle with bigger opponents. He’s seemingly always in the hip pocket of receivers so it’s tough to gain separation from him.

Six interceptions in twenty-six career games might not seem like a gaudy amount, but it proves to me he has the awareness and anticipation to be a ball hawk in the NFL. As previously mentioned, he’s a former wide receiver, so you know he has the hands to not drop any easy picks. When he turns his head around (more on that later), he does a great job of keeping his eyes on the quarterback and jumping routes. Many of his interceptions came from his excellent coverage skills, in that wide receivers are unable to break free from him.

At 6-2, 200+ pounds, Caleb Farley has excellent size for a corner, but it’s how he uses his size that makes him a top prospect. He battles in coverage and isn’t afraid to be physical with receivers. I honestly didn’t see him in press coverage too much, but when he did it, he held his own. In addition to his size, he runs very well and displays good short-area quickness. For what he lacks in refinement and experience, he makes up with with athleticism.

He came to Virginia Tech as a wide receiver and played quarterback in high school, so he doesn’t have much experience at the cornerback position. There are times where his inexperience shows up though. Now that he won’t have a third year of tape, there will be some questions. He might not produce immediate results as he continues to learn the position, so an organization needs to be patient and trust their coaching staff.

This is my biggest pet peeve for defensive backs and it happens at all levels. You’re taught as a corner to stay close to your receiver but at a certain point turn your head around. Caleb Farley got cheap penalties or gave up big plays because he lost track of the ball. You can probably say this is a result of inexperience, but some players never develop this instinct.

Because he’s so aggressive, Caleb Farley will bite on double moves. You have to take the good and the bad with aggressive corners, but this leaves you open for a big play against. Maybe being put into a system that utilizes a deep safety over the top will help Farley’s play as it’ll allow him to be aggressive but still have some help in case he gets beat.

Farley was a pleasant surprise and impressed me when watching his film. He has a good chance to develop into a top corner in this league but a team will have to be patient with his development. He has the skills that you can’t teach and projects to be at worst a mid-level starter in the NFL. With the growing importance of the passing game, good corners are in high demand. I expect him to go right in the middle of the first round, where he has the chance to get some playing time early.