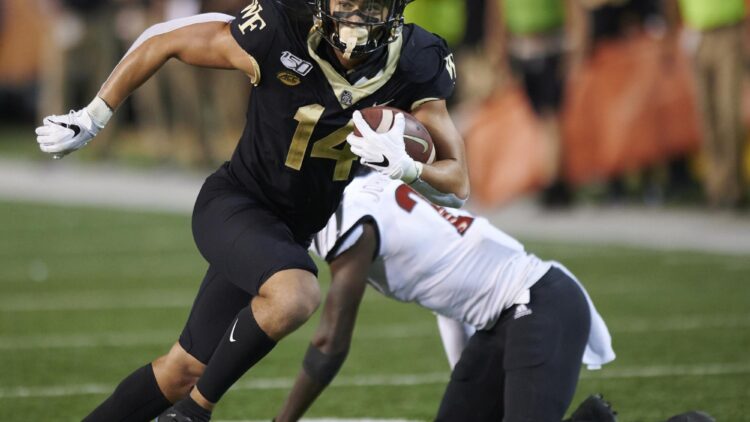 In high school, Sage Surratt became his school’s all-time leading scorer in basketball, an all-state selection in football and basketball, and was the valedictorian of his class. Talk about someone who can do it all. He originally committed to Harvard to play football but decided to go to Wake Forest, figuring it would help his chances of making the NFL. His brother, Chazz Surratt, plays linebacker at UNC and both brothers figure to be top-100 picks in the 2021 draft. Wake Forest might not be known as a football powerhouse, but Surratt put up over 1500 receiving yards and 15 touchdowns in two years before deciding to opt-out of the 2020 season. A true competitor and craftsman at his position, Surratt puts himself near the top of a deep wide receiver group for the 2021 draft.

Using his size to his advantage

At 6-3, 215 pounds, Sage Surratt is built like a basketball guard rather than a wide receiver. However, he uses his tall and lanky frame to his advantage. At his size, he can box out defensive backs and uses his long arms to get the ball. One of the more successful routes he ran was a back-shoulder throw where the defender is unable to get their arm across his body. His frame makes him an excellent possession player and he will be a favorite of his quarterbacks due to his large target area. His large frame also makes him extra valuable in the red zone, as he can be a jump ball guy who’ll highpoint the ball. Also, don’t let his slender frame fool you, he is an aggressive player. He can break a tackle and won’t back down from a physical corner if they’re in the way of him getting the ball.

In the games I watched, I didn’t see Sage Surratt drop any passes. It’s even more impressive since his quarterback last year, Jamie Newman, isn’t necessarily the most accurate of passers. He does a good job of catching with his hands rather than allowing the ball to get into his body. Like I mentioned earlier, he’s exceptional at high-pointing the ball and using every inch of his frame to his advantage.

Ability to get open deep

Despite not having elite speed, Sage Surratt can get open down the field with the best of them. He’s a good route-runner and turns 50/50 balls into 80/20 balls due to his size and body control. After running slants or comeback routes the entire game, he’ll go for the double move and leave his defender in the dust. In the NFL where offenses are focusing more on the vertical passing game, a receiver like Surratt becomes even more valuable due to his skillset and big play ability.

While he may be a good athlete, Surratt is not a very fast wide receiver. In fact, he’s pretty slow. Despite this, he’s had a lot of success in college but he’s also playing in the ACC and in a spread offense. Will his lack of speed hurt him in the pros? I don’t know. I think speed is not a necessity, but it sure does help.

It’s not that Surratt isn’t physical, it’s just that he has trouble beating press coverage consistently when clearly he has the tools to be much better. It could come from a lack of functional strength, which isn’t a huge problem since he’s still young. He needs to spend these net few months building his “man body” and working on technique. I’m not overly worried about this due to his size and aggressiveness.

As Surratt gets stronger, I think he’s going to be a very good player in the NFL. He may never be a true WR1, but I think he’s going to carve out a nice role for himself as a deep threat and reliable receiver on the outside. He’s scheme-versatile and he should be an immediate producer — possibly even a starter right away. Right now, I think he’s looking like a second round pick, but with a great combine I think he has the chance to solidify himself as a first round selection.