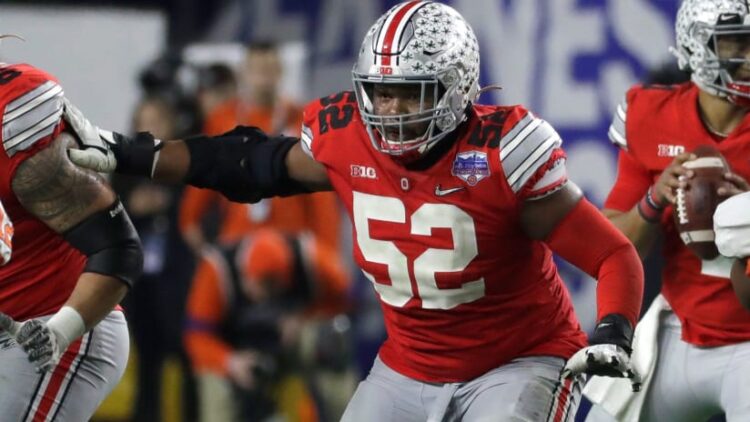 If you want someone who will bring it every single play, look no further than Ohio State guard Wyatt Davis. Davis was one of the players who declared for the 2021 NFL draft after the Big Ten originally announced there would be no fall football, but now that the conference is back in, so is Davis. Davis is the anchor on a good Ohio State offensive line and despite playing guard, will be a first-round selection barring any unforeseen circumstance. When you see Justin Fields make plays for the Buckeyes, just know it starts up front with guys like Davis.

Wyatt Davis has that mean streak that you want in your offensive linemen. He’ll bring the fight to the defense every time and makes life difficult for anyone who tries to get past him. When they run behind him, he’s usually moving his man out of the way and helping gain positive yards. His functional play strength is elite for a player at any level and he’s able to use that strength to set the tone on the offensive line, whether it be in the run or pass game.

Ability to get to the next level

What helps make him such a scheme-versatile player is his mobility. Wyatt Davis is relatively quick for a guy his size and does a great job of getting to the second level. He demonstrates this both as the pulling guard or moving vertically up the field, clearing massive lanes that any running back can run through. While I think he would be best in a power run scheme, he displays the footwork and athleticism needed to run zone.

In a pass-first league, keeping your quarterback clean is the first step towards an offense’s success. An offensive lineman can be a dominant run blocker, but chances are they won’t be a long-term starter if they are unable to hold their own in pass sets. However, a stud like Wyatt Davis is downright dominant as a pass blocker and translates very well to becoming successful in the NFL because of it. Of course, there are times where he might get pushed back a bit on a bull rush, but that happens to every offensive lineman who has ever played the game. Davis does a great job of extending his arms (without holding) and keeping his body in front of defenders.

Now I don’t expect a 6-4, 315-pound man to be a ballerina, but I saw Davis fall down more than I would like for a player of his skill. He can develop better balance and body control the older he gets. Is this a major problem? Not really, but it is something I’m going to pay attention too.

Offensive guards normally aren’t high draft picks. Of course, Quentin Nelson went top five a few years ago, but for the most part, the position isn’t treated as a premium. I figure Davis to go in the top half of the first round, which means expectations will be very high. There’s little doubt that he’ll succeed, but he may not get the luxury of a slow start like most rookies.

Wyatt Davis is honestly as good as you’ll get for a guard prospect. Sure, he may not be the best in all of football within two years like Nelson was, but it’s not crazy to expect multiple Pro Bowl selections for him. Since there’s nothing he can’t do, he makes himself very valuable to any team. I would like to see him in an offense that wants to run the ball because he can be a machine at times, clearing out enough space that an 18 wheeler could run through. If your favorite team drafts Davis this spring, don’t be disappointed you drafted a guard. Be excited you drafted an incredible talent.