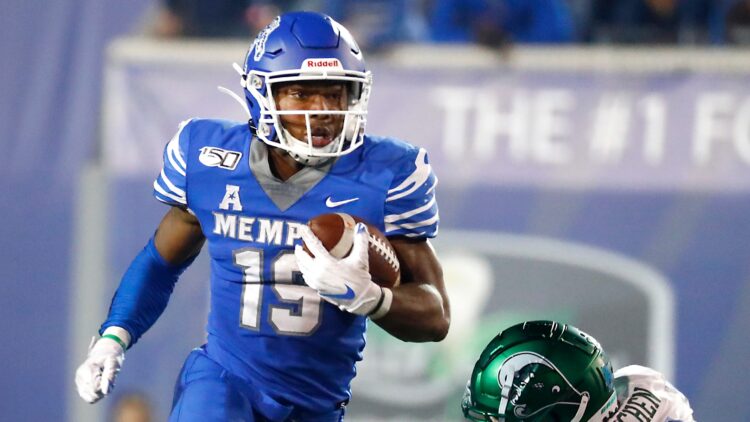 It’s quite the compliment when your coach calls you the best running back and best receiver on the team, as that’s exactly what Kenneth Gainwell was to the Memphis Tigers until he decided to opt-out of the 2020 season. While he hasn’t technically declared for the draft, it is expected that he will as his playstyle fits perfectly to what many offenses want, speed and versatility. He had over 2,000 rushing and passing yards as a redshirt freshman and was the featured guy in an offense that had current Washington Football Team running back, Antonio Gibson. The Memphis offense is designed to score points at a very high rate, but even with that, there were moments that Gainwell just made extraordinary plays.

Anytime Kenneth Gainwell touches the ball, he could take it to the end zone. He has elite level speed and when he hits the open field, not many can track him down. However, it is the way that he is able to create space for himself that makes him special. He has exceptional vision and sees open lanes in any direction. Memphis ran a lot of stretch plays for him, which perfectly utilized his skill set by going laterally before making one cut and heading upfield. What makes me so optimistic for his future as a running back is this skill that will be with him long after his speed starts to decline.

Weapon in the passing game

This is where he might make his biggest impact in the NFL. He is an excellent route runner for a running back and is a mismatch against linebackers when he lines up in the backfield. However, he has a lot of Alvin Kamara in his game in the sense where he can line up split out wide or operate from the slot. When most teams see a running back split outside or in the slot, they’ll put a linebacker or safety on them. With a dynamic threat like Gainwell, you can’t do that or he’ll burn you. To make himself an even stronger asset, he is solid in picking up blitzes and displays the effort needed to keep his quarterback clean.

Whether he was lined up in the backfield, in the slot, out wide, or at quarterback, Kenneth Gainwell was a playmaker. He’s not going to be the conventional bell-cow back, but he is an offensive weapon. If you can find a way to get him between 10-15 touches a game, in a variety of ways, you’ll be able to maximize his value. I think seeing the way that the Bears use Tarik Cohen or how the Saints use Kamara is how we’ll see Gainwell used. He can’t be used in a boring or standard offense, but needs to be used as a chess piece in a high-powered offensive attack.

Not a traditional running back

If you’re looking for a guy to carry the ball 20+ times a game and used in 22 personnel in a power run offense, Kenneth Gainwell isn’t what you want. He might be an acquired taste that has to fit a certain offensive identity, but that’s just how it works in the NFL. How a player fits in a system is important for every player, but with unique players like Gainwell it’s everything.

Kenneth Gainwell might not be too effective in short-yardage situations or running in between tackles. It’s just not really his strong suit and his body type (5-11, 195 pounds) doesn’t suggest he can take a lot of punishment. Can he be effective at times running up the gut? Yes, but it’s not something you can overly rely on.

Fit is everything for a player. But if we were to rank the importance of the right fight for players in the 2021 draft class, Kenneth Gainwell would be at the top. If he’s in an offense that is vanilla that won’t use him creatively, he won’t live up to his potential. I think he’s a guy you find ways to get the ball to and let him tear up opposing defenses. Think of all the teams that have very creative offenses (49ers, Rams, Chiefs, etc) and that’s exactly where you want Gainwell to go. Jet sweeps, screens, end arounds will work for him, but him on the goal line asked to get two yards up the middle might not. Put him in the right spot, and he could just be the first or second most productive running back in this group.