Kylin Hill: King of the Hill 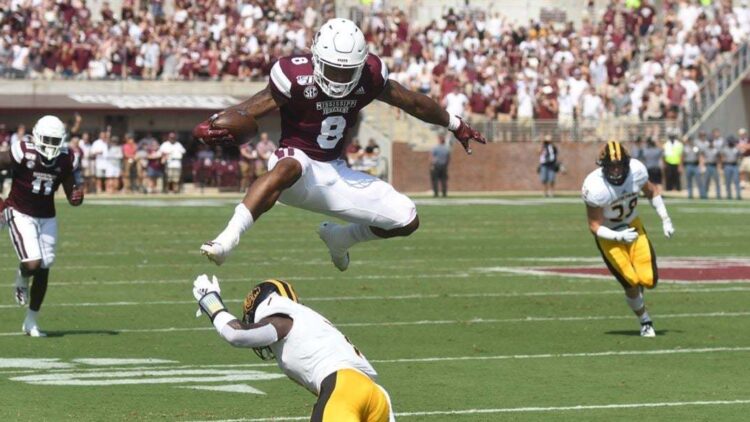 Kylin Hill will forever be an icon for Mississippi State fans. Besides the fact that he helped get the state of Mississippi to change their flag, he was a key clog in the Bulldogs offense for four years. He did decide to opt-out of the season due to the coronavirus pandemic but figures to be one of the top running backs in the 2021 draft class. It seems that at the moment Alabama’s Najee Harris and Clemson’s Travis Etienne are one and two, but the spots after that are up for grabs. If Hill can have a strong combine to go along with the progress he has shown the past few years, there’s a chance he becomes a day two selection.

Kylin Hill is exactly what you want in terms of a North and South runner. While he can be patient behind the line of scrimmage, once he sees his opening, he’ll hit the hole hard. He’s not a guy that’s afraid of contact but also displays the quickness needed to accelerate past linebackers. If you look at most of the best running backs in the NFL, you’ll see they have similar running styles to Hill. They see an opening and don’t waste time dancing side to side. Players who run East to West are either gimmicky players or spend time bouncing from team to team. Downhill runners will always have a place in the league.

If there’s one thing where we saw a big improvement in Kylin Hill’s game in 2020, it was as a pass catcher. While there is some room for improvement, Mike Leach’s Air Raid system devalues the running back position so Hill had to make the most of his opportunities as a receiver in the few games he played this year. In fact, he had more receptions than carries this year. I don’t see him used as an Alvin Kamara or Christian McCaffrey type running back, but he is a true three-down back who will keep defenses honest at the next level.

If you were to look up the term “football player” in the dictionary, you could put a picture of Kylin Hill right next to it. He’s tough as nails and will stick his nose into contact as frequently as he can. His contact balance is superb and rarely does he go down from arm tackles. Listed at 210 pounds, he plays a lot bigger than that due to the fact that he will take on anyone. Simply put, he’s a guy you want on your team to help build a culture of toughness.

If you look at some of his longer runs in the GIF’s above, you’ll notice how he’s always being tackled from behind. Players have been successful without long speed, but it diminishes their big-play potential. A guy like Frank Gore has been in the league since the Cold War, yet has never displayed good long speed. Hill is a guy who can gash defenses for 4-7 yards a play, which is what you will take every time but won’t be the guy you call upon to come up with a home run play.

Sometimes he’s looking forward to running a guy over so much that he misses open lanes where he can gain more yards. The attitude and toughness are what you love to see, but in order to help his team out and maintain his health, he needs to change his approach a little bit.

The running back position might not have the draft importance it once did, but that doesn’t mean it’s a meaningless position. For as much as the NFL is focused on the passing attack, great teams are able to run the ball effectively in key moments. Like I said earlier, I think Kylin Hill is a safe bet for a second or third-round selection and if he were to drop any further, he would be a steal. He’s a relatively scheme versatile player, so no exact team at the moment pops into my head as a good fit for him, but he is a good back who can come in right away and get some touches.