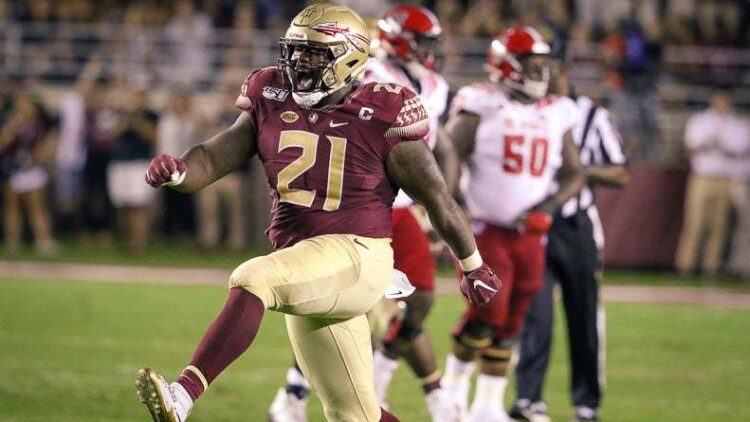 Florida State defensive tackle Marvin Wilson surprised many people by announcing his intent to return for his senior season in 2020 for the Seminoles. He was projected as a late first-round pick but felt like he had something to prove and enjoyed the responsibility as a leader on a Florida State team that was in the middle of a coaching transition. Unfortunately, he and his team struggled and he is now out for the season with a hand injury. However, I think he’s a top defensive tackle in a relatively weak positional group for this year’s draft.

Ability to control the middle

Marvin Wilson is a big man in the middle of the defensive line and he does a great job of occupying blocks and pushing the pocket. Not every defensive tackle is a pass rush wizard like Aaron Donald. Their job is to take up two blockers to create mismatches for linebackers and edge players. While Wilson does make a decent amount of plays in the run game, he makes a bigger impact in my opinion forcing runners to bounce outside or run right into the brick wall he has formed.

Despite being listed at 6-5, 305 pounds, Wilson has the agility and body control of someone much smaller. He never gives up on a play and you can expect to see some impressive effort from Marvin Wilson down the field. With mobile quarterbacks almost becoming the norm, you need your linemen to be able to keep up with the pace of the offense. With Wilson, you don’t have to worry about this.

Offensive linemen must be sore after trying to block Marvin Wilson for four quarters because he is powerful. What he might lack in refinement and technique, he makes up for in strength. When he gets his pad level low enough, he can toss 300+ pound men like a sack of potatoes. Especially in his sophomore and junior season, he just bullied opponents and willed his way past them. In addition, he knows how to use his larger frame, as evidenced with blocking two kicks this season. If you can’t get the penetration, good linemen get their hands up and try to swat the ball away.

Wilson’s 2019 season ended due to a hand injury, which required surgery and he now is out for the 2020 season with a leg injury. Neither injury seems to be career-altering in any way, but back to back season-ending injuries is never good. His pre-draft medicals will be very important.

Play got worse the past few years

I’m a huge fan of his swim and pull move, but way too often he gets stood up too easily. Most defensive linemen in college don’t have a wide variety of pass rush moves, so this isn’t a huge issue. However, as the league is now so pass-happy, to be a three-down player you have to be able to rush the passer in some capacity with consistency. Players who project as a two-down players don’t get drafted highly. I think Wilson is a three-down guy, but I wouldn’t be surprised if some teams didn’t.

Like I said earlier, Wilson is one of the top interior defensive linemen in this class. He can play in either a 4-3 or 3-4 defense, which is something teams will appreciate. While I doubt he’ll ever have impressive sack totals, I can see him being an impact three-down player. His health will determine how far he goes, but I see no reason for him not being a very solid player for the next decade.