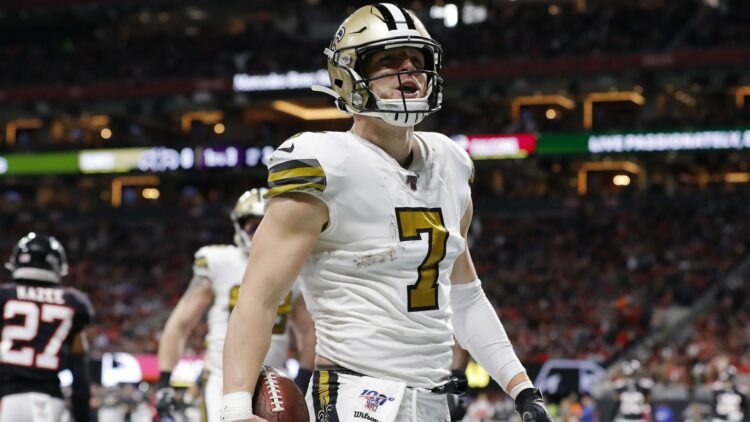 Taysom Hill finally got his shot to start for the New Orleans Saints and he did not disappoint. He showed good mechanics and accuracy and was routinely able to move through reads. He dealt well with pressure off of play-action, understood where his hot routes were, and his ball placement helped keep his receivers out of harms way. While it wasn’t a perfect game and he was inconsistent with his anticipation throws, it was a very good showing for his first start as a quarterback.

One of the more common pass game concepts that the Saints run is Dagger. It involves a clear out from the slot and a deep dig in behind it from the #1 receiver with a shallow drag from the receiver to the backside of the play. The clear out takes away the deep defenders and the shallow drag is designed to help hold the linebackers underneath which opens up space for the deep dig. This play shows the versatility that Taysom Hill brings to the quarterback position.

He did a really good job most of the game keeping his eyes up when moving in the pocket and getting outside. Taysom comes out of the play action and looks to locate where the underneath defenders are to see if they’ve gotten under the dig. As he diagnosis that, he feels pressure and has to climb up and out of the pocket. A really good indicator that he has a chance to become a legitimate starter is that he keeps his eyes up instead of relying on his legs. He sees that the dig has made its way across the field and delivers a really accurate ball on the move to his receiver.

This is that same Dagger concept but I want to use this example to show Taysom’s ball placement ability and his understanding of defenses and holes that appear. The Falcons here are bailing to a two-high safety look with the slot defender immediately turning his hips and bailing at the snap. Again, off of play-action, Taysom has to quickly diagnose this shift and process what that means for the play.

With that rotate and with no receivers releasing to the top of the screen, Taysom understands that that corner can now get under the clear out and the original middle field safety is freed up to rob anything in the middle. This means that Taysom needs to protect his receiver on the deep dig if that’s what he’s going to throw. He can’t lead him into the middle of the field because that free safety will be able to deliver a big hit or impact the throw. Taysom is able to diagnose all of that and throw to the back hip of the receiver to slow them down and prevent a big collision with the safety.

Taysom Hill showed a few good anticipation throws throughout the game as well. The guy might be 30 years old, but for a first start and his prospects of being a legitimate starter, these are some really big things at the quarterback position. Taysom consistently had a stable base which allowed him to be accurate and stay on rhythm to throw with anticipation. Here he’s seeing the space underneath the deep curl is open and begins his throwing motion just as his receiver is breaking down. These are the kinds of throws that can be problematic if you throw them late or aren’t seeing the defense well but Taysom was able to hit a number of these through the game.

He wasn’t perfect, but the throws he made were definitely good indicators. Here again, he keeps a solid base and begins his throwing motion just as the receiver is starting to break their route off and hits him at eye level for an easy completion.

That ball placement is what I found most impressive.  It’s starting quarterback caliber. He’d throw back hip to slow receivers down and protect them from hits, give them balls that they could easily run with after the catch, and showed decisiveness and zip on a lot of his underneath and intermediate throws even with pressure in his face.

While he showed good understanding of where his hot reads were, there were a couple times where he didn’t realize he was hot. Based on what the defense is showing here, there are seven total potential rushers and the Saints are in an empty formation with no running back to help in pass protection. Taysom knows that if more than five rushers come, he has to get rid of the ball.

The Saints are running a half line slide here to the side with more potential rushers. From the center over, they’re sliding right to take care of the three “bigs” or defensive linemen to that side. Taysom Hill has to know that if either linebacker comes on a blitz to that side, he’s hot and has to throw to the area that that linebacker is blitzing from. The Saints have a drag from Michael Thomas built in that would be the route Taysom should throw since the linebacker is blitzing from that area. However, Taysom doesn’t look to check for a blitz and therefore doesn’t see the pressure coming soon enough. By the time he feels it, it’s already too late and he takes a sack.

While Taysom did show a number of anticipation throws, there were also some reads where he was a beat late. On his only turnover worthy throw of the day here, he’s seeing the window, but throwing it late. He initially wants the route out of the backfield to Deonte Harris but holds onto it for a beat too long. There’s a window for the drag to Thomas but it has to be thrown with anticipation. With Taysom being a beat late, the defender is able to close the opening and get a hand on the ball.

It’s a small sample size in his first start but there also may be some concern for his deep ball. Taysom Hill had no issue driving the ball on intermediate throws but the two times he tried to load up and throw deep, he ended up underthrowing his receivers. It worked out both of these times, but if he’s going to attack deep downfield, he might need to be a guy that does it on rhythm much like Drew Brees does. He doesn’t seem to be a guy that can throw it late on a broken play since he’s topping out at about 50-55 yards on these throws. That’s more than enough for normal fades and rhythm posts, but not quite enough to sling it late downfield.

Of course, while Taysom Hill may struggle throwing deep late, he does bring his ability to scramble and run to the table which can’t be overlooked. The Saints really didn’t do anything fancy but ran this quarterback power lead play five separate times in the game. It helps the offense gain an extra blocker when the quarterback is the ball carrier and adds to Taysom’s ability and utility. In important situations, he’s able to get yards with his legs and adds another dimension to the Saints attack.

We knew Taysom Hill was a versatile player before this but I came away very impressed with his accuracy, clean mechanics, and ability to keep his eyes downfield when under pressure and outside the pocket. He’s always a threat on the ground but if he wants the opportunity to be a legitimate starting quarterback, he’s going to have to continue to put together games like he did against the Falcons. It wasn’t perfect, but it showed his ability and gave the Saints something to think about going forward. Maybe all that talk Sean Payton did about him being the next Steve Young isn’t so far off and the Saints will be set for years to come.