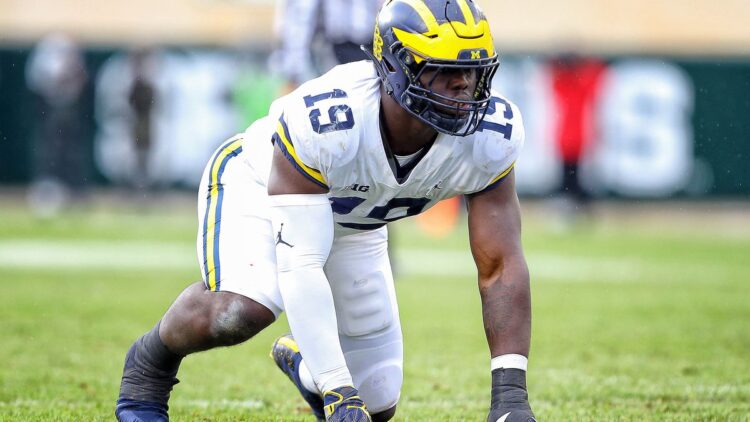 Kwity Paye has been a player that NFL draft fans have been studying closely. On one hand, he only has 11.5 sacks in four seasons. That’s not much for a guy who plays on the edge as much as he does. On the other hand, he might just be the best pound-for-pound athlete in college football. He’s a surefire first-round pick, but the questions are: How high will he go? And will he be the first edge player taken? Any team in the top ten that believes they can unlock his limitless potential should take him.

Kwity Paye was the top name on Bruce Feldman’s freak list before the season and you can see why he earned that title on the field. In terms of athletic testing, he is off the charts in every single category and putting up numbers that would set combine records. During games, you’ll see these flashes of speed and agility that most people who are 260 pounds just don’t have. It’s also worth mentioning that the top guy on Feldman’s freak list has gone on to be a top 14 pick the last four years.

While the league is more focused on trying to stop the pass, the ability to and stop the run is still important. Kwity Paye is a stout run defender and does an incredible job of setting the edge. You don’t see many running backs break tackles when Paye gets his hands on them due to his strength and fundamentals. Because of his skill against the run, I think you could line him up inside on occasion, especially if he continues to add weight. He is at his best when crashing in on an inside run where a team leaves him as the unblocked defender. Not a smart call by the offenses because he’s going to make a play. When this happens, he uses his short-area speed to be the first person to the ball.

I mentioned this earlier, but Paye is incredibly powerful for an edge player. In the games I watched, I didn’t see him miss a tackle. More than that, he’s not even allowing the runner to get any extra yards once they’re in his grasp. He also isn’t letting offensive linemen push him back and holds his own against bigger guys.

He might not have the sack totals of a guy like Gregory Rosseau, but Paye has the skill to be a high-level pass rusher in the NFL. In the first three games this season alone, he had 24 QB pressures. Sure, pressures aren’t sacks and you want to see more production in that category, but to me, it shows positive signs. He has multiple ways to beat you as a pass rusher that makes him very difficult to block. He’s fast enough to beat you with speed, strong enough to bull rush you, and has the hand technique to out-class you. I think we’ll see him get consistently between 8-12 sacks while in his prime.

For being such a special athlete, Paye has a lot of trouble disengaging from blocks. I’m not sure if it’s an issue of length or just being a raw player, but he’s way too talented to be engaged with blockers as long as he is sometimes. As he continues to develop into a football player, I would expect that this problem gets cleaned up. If it doesn’t though, it’s alarming because his athleticism won’t be elite forever.

Now, this might be a coaching thing, but Paye’s awareness of misdirection plays is poor. On jet sweeps and option plays, he went in the wrong direction and away from the ball carrier almost every time. Knowing Don Brown’s defense, I wouldn’t be surprised if he tells Paye to just go inside every time, but it’s not a good look for Kwity Paye as a player.

Kwity Paye is a fun defensive linemen to watch. He seems to make at least one “wow” play a game, which doesn’t always show up in the box score. I think he might need a season or two before we see a big sack total. However, in the short-term, he’s still going to be a strong run defender and put pressure on quarterbacks if you don’t pay special attention to him. When it’s all said and done, Paye is probably going to be the first edge defender drafted. Teams like the Falcons, Lions, and Raiders could use some edge help and would all be excellent fits for Paye.