The Little Things George Kittle Does to Improve the 49ers Offense 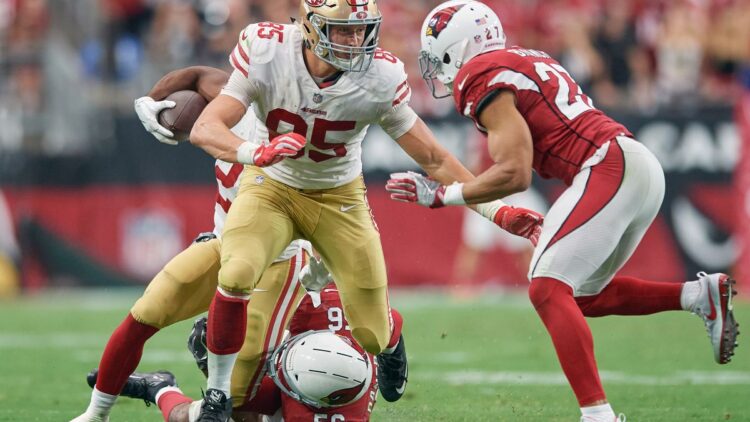 We know George Kittle is good. After having him out of the lineup for a number of weeks though, it can be easy to forget just how much of an impact he makes on the 49ers offense. He tallied 94 yards on four catches against Arizona, but he was also the lynchpin on multiple long runs by San Francisco.

George Kittle’s athleticism in the run-game can’t be understated. The 49ers are running a guard / H-back counter scheme here. The left guard, Laken Tomlinson, is pulling and kicking out the end man on the line of scrimmage. Ross Dwelley is wrapping through. Kittle is on the play-side here and his job is to down-block with the right tackle and climb to the “Mike” linebacker (#58). The linebacker reads the counter scheme well and is attacking the wrapping H-back in Dwelley. George Kittle saves the play and prevents that linebacker from filling the hole and meeting Dwelley at the line of scrimmage. He knocks the end man on the line of scrimmage onto the right tackle so that the tackle has an easier block. He is then able to get enough of the linebacker to start to open the hole for Dwelley to come clean up.

That athleticism in the blocking game really shows up when he’s tracking guys at the second level. Ross Dwelley is a fine player and does alright in the run-game but you can really see the difference between he and Kittle when they have to track linebackers at an angle. The 49ers are running a wide zone play off jet sweep action. Dwelley needs to track the safety (#31) after giving a post arm to help on the defensive end. He’s a beat slow and takes a poor angle to get there.

On the same run concept here, George Kittle has to reach the linebacker. He takes a better angle and is able to get onto the block. That block allows for the cutback by Jeff Wilson Jr.

When you combine Kittle’s athleticism with his power and strength, it’s no surprise that he is so impactful when he’s on the field. He’s even able to root out and move defensive ends. He keeps a great base and leg drive to move Zach Allen #94 about five yards down the line of scrimmage. To finish he then goes ahead and pancakes him on top of it.

We know that Kittle is great in the passing game as well. When he establishes himself as a blocker, it makes it a lot easier to release him on play-action. Shanahan is a master at making everything look the same. Kittle takes the same tracks as if he was going to cut off a linebacker or wash down a defensive end.

The 49ers use the below Y-Under Sail concept a ton out of their heavy formations. All they’re doing is flooding one side of the field with one deep route, one intermediate route, and one flat route. Off of play-action, Kittle is angling for two steps like he’s blocking wide zone and then plants to run the Y-Under and drag across the field. Linebackers flow to the run fake and then it’s good luck tackling him in the open field.

He’s an incredibly smart player as well. This is my favorite play from him in his first game back against the Cardinals. Partly because it freed up Juszczyk on the play and I love watching that guy play. The 49ers run their wing in motion and the defense runs with him. That tells Kittle that they’re in man coverage. That means that the linebacker (#58) is going to take the first back out to his side. That’s ultimately going to be Kyle Juszczyk. This is a pure pick play from the 49ers. Kittle releases around the defensive end and then takes a track to get in front of the linebacker that is assigned to Juszczyk. He runs right into him and Jusczyk is wide open for a touchdown.

All these little things add up in a game. They’re especially when you’re starting CJ Beathard and you need those little advantages. It’s a shame we won’t see him in the playoffs this year. He’s a joy to watch and adds a lot of production that doesn’t show up on the stat sheet for the 49ers offense.