AJ Dillon Inspired Confidence With His Reads and Power 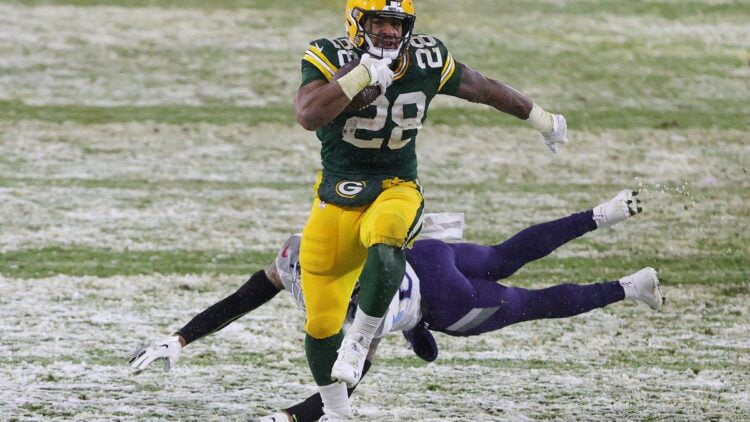 AJ Dillon, the Packers second round pick, finally got his first significant playing time on Sunday versus the Titans. While the Packers have gotten meaningful snaps out of Jon Runyan and Kamal Martin, Dillon was relegated to the 3rd running back role. That might not last long. Dillon looked more than capable of living up to being that physical force that the Packers drafted him for.

On his 21 carries the Packers got to see him make every read they could have wanted. He read outside and inside zone well and with good decisiveness. Dillon also and made a few good plays off of the Packers Duo scheme.

On outside zone, the running back is reading the defensive line from the outside in. The initial aiming point is the outside leg of the tight end. If the offense is able to seal the outside, you’re already on track to get to the edge. It doesn’t happen very often but we saw AJ Dillon do just that. In the play below, Marcedes Lewis (#89) and David Bakhtiari (#69) were able to seal the end man on the line of scrimmage. Dillon gets to the outside where he’s one-on-one with a defensive back.

Here, the Packers are running inside zone. Dillon’s track is now for the play-side guard (Billy Turner #77) with the intention of hitting the A-gap between the guard and the center. He quickly diagnoses that the walked up defensive back and the rest of the Titans defense have filled his play-side gaps. Dillon bends the play towards the backside between Elgton Jenkins (#74) and David Bakhtiari (#69) and quickly gets vertical.

The Packers ran Duo a number of times through the game and Dillon read it perfectly for some big gains. The duo scheme is all about getting double teams at the point of attack. You want as many of those double teams as possible. The aiming point for Dillon here is the play-side A-gap right between the guard and the center. Instead of reading the down linemen here though he’s instead reading the linebacker. If that linebacker fills the A-gap, Dillon will bounce the ball outside of the double team by the tackle and tight end. This is not an easy read for most running backs. Dillon reads this decisively and correctly and works right off of the double team to the outside to get up into the second level for a nice play.

In Duo, you’re leaving the corner unblocked. If that’s the guy that makes the play on your running back, that’s something you have to live with or scheme around but most offensive coordinators like that matchup. We have the same scheme here and the same read by AJ Dillon. As soon as Dillon gets the handoff and presses the hole, he sees the linebacker commit to the A-Gap. He then bounces to read the double team by the tackle and tight end which has sealed their defensive lineman inside. Now, it’s AJ Dillon on a corner and Dillon easily avoids the tackle for a touchdown.

To finish up, AJ Dillon’s quads are for real. The man plays with power and good explosiveness for a back of his size. He plays with excellent leg churn on contact and whatever color jersey you have on (even if it’s green and gold), when he’s going, it’s better to get out of the way.

There were some really promising things from AJ Dillon in his first extended time. He played hard and lived up to the bill of being a physical piece to the Packers offense. He didn’t get a ton of pass protection reps but had one or two miscues where he set too far outside allowing a pressure on Aaron Rodgers. He’s young and getting his first game action, though. It’ll be exciting to see his role develop, if not this year, then in year two with the Green Bay Packers.