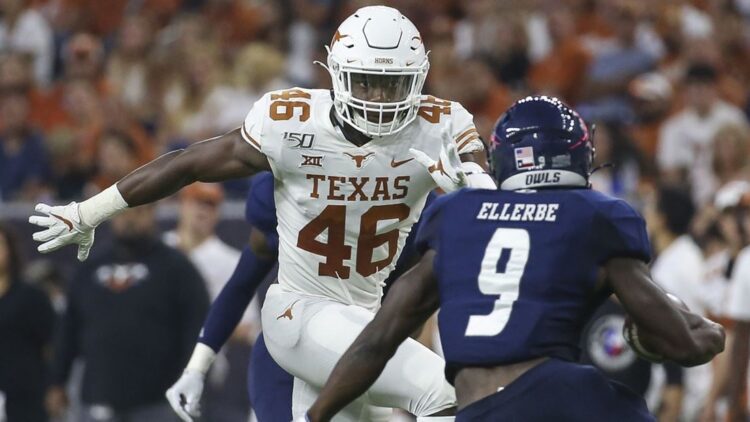 A native of Nigeria who immigrated to the United States as a child, Joseph Ossai grew up playing other sports in his home country before falling in love with football. Ossai’s versatility and athleticism are apparent right off the bat as he’s typically the quickest defender to the ball and making tackles all over the field. He has an infectious energy and will never give up on a play. He’s the type of player who sets an example with his effort and is a natural leader. After three years in Austin, he’s taking his talents to the NFL where he should expect his name to be called early.

In terms of being a pure speed rusher off the edge, no one is better in this draft class than Joseph Ossai. He has great anticipation of the snap count and his first step is elite. He has two primary pass rush moves. One is drawing the tackle in and using a push/pull technique. The second is looping from the outside into the middle. Both of these moves allow him to use his quickness to his advantage, which is the main reason he’s so effective. He’s going to immediately become a productive pass rusher in the NFL and will particularly make an impact on third down.

Like I mentioned earlier, one of the keys to Ossai’s success is his quickness. He starts at Jack linebacker for the Longhorns, which is essentially an edge/linebacker hybrid. Think of a 3-4 outside linebacker who plays from a two-point stance in the base formation and then with his hand in the dirt on third down. Due to his build and athleticism, there are quite a few positions I think he can play. He can play in a 3-4 or 4-3 defense, on the line, or lined up as an off-ball linebacker. Having a swiss army knife like Joseph Ossai is a huge advantage for any defensive coordinator.

Part of the reason why we could see Joseph Ossai play on the edge or at linebacker is his ability to tackle — especially in the open field. He properly reads the ball carrier and understands the angles that they want to take. Then, he’s able to wrap up and complete the tackle. For a relatively raw player, he’s a fundamentally sound tackler who I didn’t see miss a tackle in the games I watched. Missed tackles are a huge pet peeve of mine and with the rise of dynamic quarterbacks who can break big runs, having a guy who can keep up athletically with them while also being able to tackle is a huge plus.

Despite being a well built guy, Joseph Ossai needs to improve his play strength. Too often he was bullied by offensive linemen. This happened particularly in the run game or when he attempted a bull rush. If a lineman was able to square up and get in front of him, there was almost no chance he was going to get around them. It also may be a problem with his pad level being a tad high. He is a 245-pound guy going up against 300+ maulers though. His lack of play strength is probably why he will be unable to be a full-time edge in the NFL. Despite that, way too often was he driven back or knocked on his ass.

Because he really does not have a position, teams will have to develop Ossai and be patient with him. Sure, he can immediately step in and be a pass rusher on third down, but where does he line up besides that? If a team can identify the proper spot for him to play, his development will be fast-tracked. If he is slow to learn a different position, a team could grow weary of him and give up too quickly. Let’s look at a player like Haason Reddick, who happens to be a decent pro comparison for Ossai. The Cardinals tried Reddick at a few positions but didn’t get much production in his first three years because he was still finding his footing as a player. They declined his fifth-year option, but he’s now playing well and is due for a nice pay day. They might not even be able to afford him when they could have held onto him for an extra year at good financial value.

Ossai is without a doubt a first-round talent and with a strong combine, could really make a push up the board. Right now, I would guess he’s a mid to late first-rounder where he can hopefully end up on a contending team in need of a pass rusher. In terms of talent, there are not many players better than Ossai, which I think makes him a great value for whoever picks him. The Raiders, Buccaneers, and Browns are three teams to look out for in the first round as they could all use a versatile pass rusher.