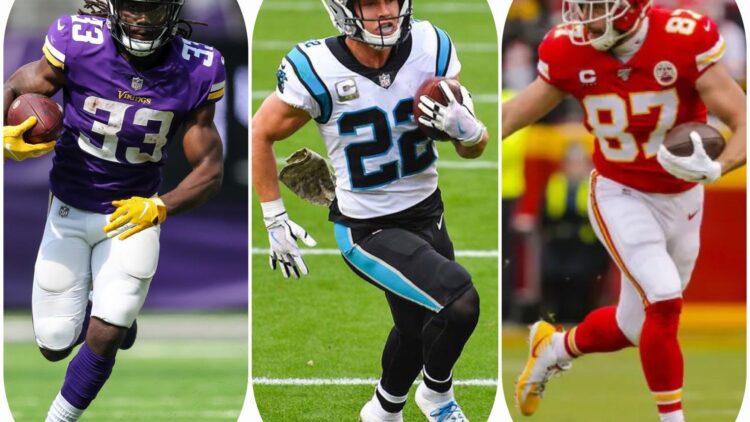 The fantasy football awards are here. With the 2020 NFL regular season coming to a conclusion this week, it’s time to take a look back at the absolute best (and worst) player performances in fantasy football this season.

This was a fairly difficult year in fantasy with the COVID-19 factor coming into play and multiple stars going down with injuries throughout the year. Top draft picks like Christian McCaffrey, Saquon Barkley, and Michael Thomas all missed significant time.

So with that being said, here are our selections for the end of the year awards in Fantasy Football.

This was extremely tough, but there was not a player as consistently great this fantasy season as Dalvin Cook. Cook finished this season with 337.8 points in PPR leagues, averaged 24.1 PPG, and only scored under 15 Points once in 2020.

The obvious runner up was Alvin Kamara, who finished with 377.8 points in PPR leagues and averaged 25.2 PPG. Looking at those numbers and Kamara’s performance in Week 16, you’d probably think Kamara is the obvious choice. However, Kamara scored just 6.2 points in Week 12 and had a 2-week span where he averaged just over 8 points. Cook was also able to produce at least 25 points six different times this year, compared to Kamara’s 5 times.

Other considerations for this award were Travis Kelce, Davante Adams, and Patrick Mahomes.

Most Improved Player of the Year:

This pick was fairly easy. Other considerations were David Montgomery and Calvin Ridley. Ultimately, the decisive winner was Metcalf due to his significant jump in position ranking, durability, and level of consistency.

DK finished 6th among WRs in PPR formats, scoring 266.2 points, and averaging 17.75 PPG. While Ridley did finish with 270.9 points, and averaged 19.35 PPG, he didn’t have quite the jump in rankings that Metcalf did. Montgomery finished this year extremely well, but his lack of production earlier in the season basically eliminated him from consideration.

Rookie of the Year:

It was a tough decision between Robinson and Justin Herbert, but ultimately the value of the RB position was the deciding factor.

Herbert was expected to take over as the starter at some point this season, but Robinson’s quick emergence as the RB1 in Jacksonville caught everyone by surprise after he went undrafted in the 2020 NFL Draft. Robinson finished 4th among RBs in PPR leagues, finishing with 250.4 points, and 17.89 PPG in the process. As for Herbert, he was absolutely fantastic this year, finishing 10th among QBs with 299.86 points and averaging 21.42 PPG.

What made Robinson’s 2020 output more impressive was the fact that Robinson did not finish with under 10 points in a game this year. Herbert’s 4.36 Point performance in Week 13, was quite the blemish on his Fantasy Football Rookie of the Year campaign.

With an average draft Position of 129th overall in PPR formats, the Vikings rookie put together one of the most impressive rookie campaigns in NFL history.

He finished 8th among all WRs with 251.9 Points and averaged 16.79 PPG. The only other candidate for this award that stood out was Robby Anderson who had an average draft position of 177th overall. Anderson finished 15th among WRs with 217.1 Points, averaging 14.47 PPG.

While Anderson was drafted significantly later than Jefferson, the fact that Jefferson outperformed guys like Keenan Allen, his teammate Adam Thielen, and Mike Evans as a rookie is a very impressive feat.

You probably saw this one coming. McCaffrey was the unanimous 1st overall pick in a vast majority of fantasy leagues, but played in just three games in 2020. Now he’s saddled with the worst of the fantasy football awards: Biggest Draft Bust.

While he did average 30.1 points in those three games, that was not enough to salvage his fantasy stock this year. The other obvious consideration was Saquon Barkley, whose average draft position was 3rd overall. He played in only 2 games in 2020, before being ruled out for the year due to injury.

Both these guys’ fates this year were ultimately out of their control, but their high draft positions make it tough to ignore how bad these picks were.

There is definitely an argument for Kelce being the best player in all of fantasy football in terms of value. With that being said, it would be a crime to not recognize the greatness that was Kelce in 2020.

He finished this season with 312.7 fantasy points and averaged 20.8 PPG in PPR formats, both by far the most among TEs. These numbers also surpass those of players like Lamar Jackson, Derrick Henry, and DeAndre Hopkins.

Kelce’s status as the best TE in the league was never in question this season, which is something that can’t be said for any other player at another position.