How Billy Turner Performed in Place of the Injured David Bakhtiari 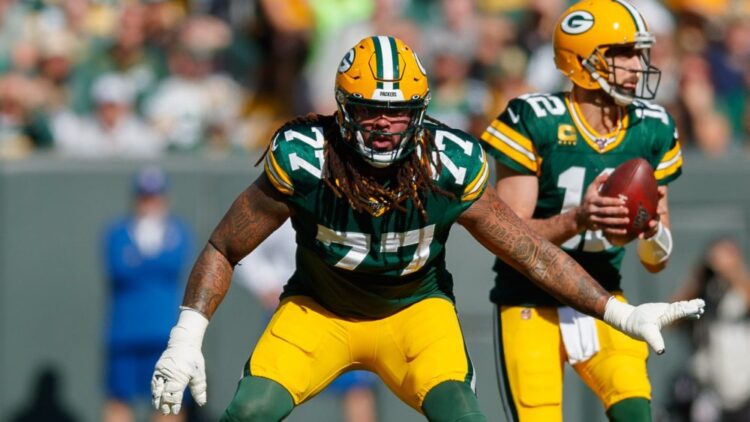 The loss of David Bakhtiari is a big one. Luckily for the Packers, they have some of the best offensive line depth they’ve had in years. Elgton Jenkins is playing like a perennial All-Pro, Corey Linsley is one of the best centers in the league, and the Packers are getting solid contributions from Rick Wagner, Lucas Patrick, and Billy Turner. To cover the loss of Bakhtiari, the Green Bay Packers and Matt LaFleur decided to kick Billy Turner over from right tackle to the left tackle.

Turner filled in for Bakhtiari earlier in the year when he was out for four weeks because of a chest injury. This position change isn’t something totally foreign to him, but he got a stiff test from a talented Bears front four this week in Chicago.

Trouble with Inside Moves

Billy Turner had a bit of an issue with inside pass rush moves against the Bears. Turner can overset in his pass protection at times. That results in him being on top of the pass rusher. This then gives the rusher the opportunity to come underneath his set instead of having to run the arc around him over the pocket.

In this first clip, the Packers are running a full line slide. A full slide means that the line is all sliding to the left and leaving Aaron Jones to cut-block the last man on the line of scrimmage. This is a quick passing game protection which means the ball should be out pretty early. You don’t expect your running back to be able to hold up on Khalil Mack for long, so if you’re Turner, you have to give your rusher the longest path to the quarterback possible. With a defensive tackle in a 3-technique to his right, he knows that he’s one-on-one outside. Turner has a good initial punch, but at the end of his kick steps he starts overset on top of the pass rush. With no help inside, that leaves a huge lane underneath him for an inside move. Especially in quick game, you can’t let the rusher take that direct of a route to the quarterback and need to be more controlled with your pass set.

This happened a couple times. Turner tends to set slightly more horizontally so that he can meet the rusher with more space behind him. That horizontal set creates gaps in the pocket and leaves him vulnerable. When rushers give him a hard push up-field, they’re setting him up for the move inside. Since he is setting out and up, that makes it harder to recover on moves inside.

Turner’s fear is getting beat around the arc which is why he can overset and allow that inside move. What’s helped him, and what he’s started to get better at, is doing what David Bakhtiari was so incredibly good at which is jumping Rodgers’ snap count. If you slow these down you can see Turner getting a full kick set in by the time the ball is snapped. By getting out of his stance and into his kick steps faster, he feels a lot more comfortable reacting. When he gets that good jump, he does a much better job of being disciplined and keeping a good base. This lets him recover for an inside move while being in position to wash the pass rush around the arc.

Since Turner sets a little more laterally and meets the defender, he’s incredibly strong on bull rushes and power moves. By greeting the pass rush, he’s minimizing the time the defender has to get a full head of steam and he himself has momentum and power on his side to match those types of pass rush moves.

Bakhtiari is a big loss but Turner has shown he’s capable of filling in and doing a good job. He’s not All-Pro caliber, but he is a good tackle. With two more weeks of practice and more time there through the playoffs, he should ease into the position and be more comfortable in his pass sets. The Packers offense is humming right now and that’s in large part due to the fantastic job that the offensive line has done. Now it’s time for the home stretch and to finish the job.