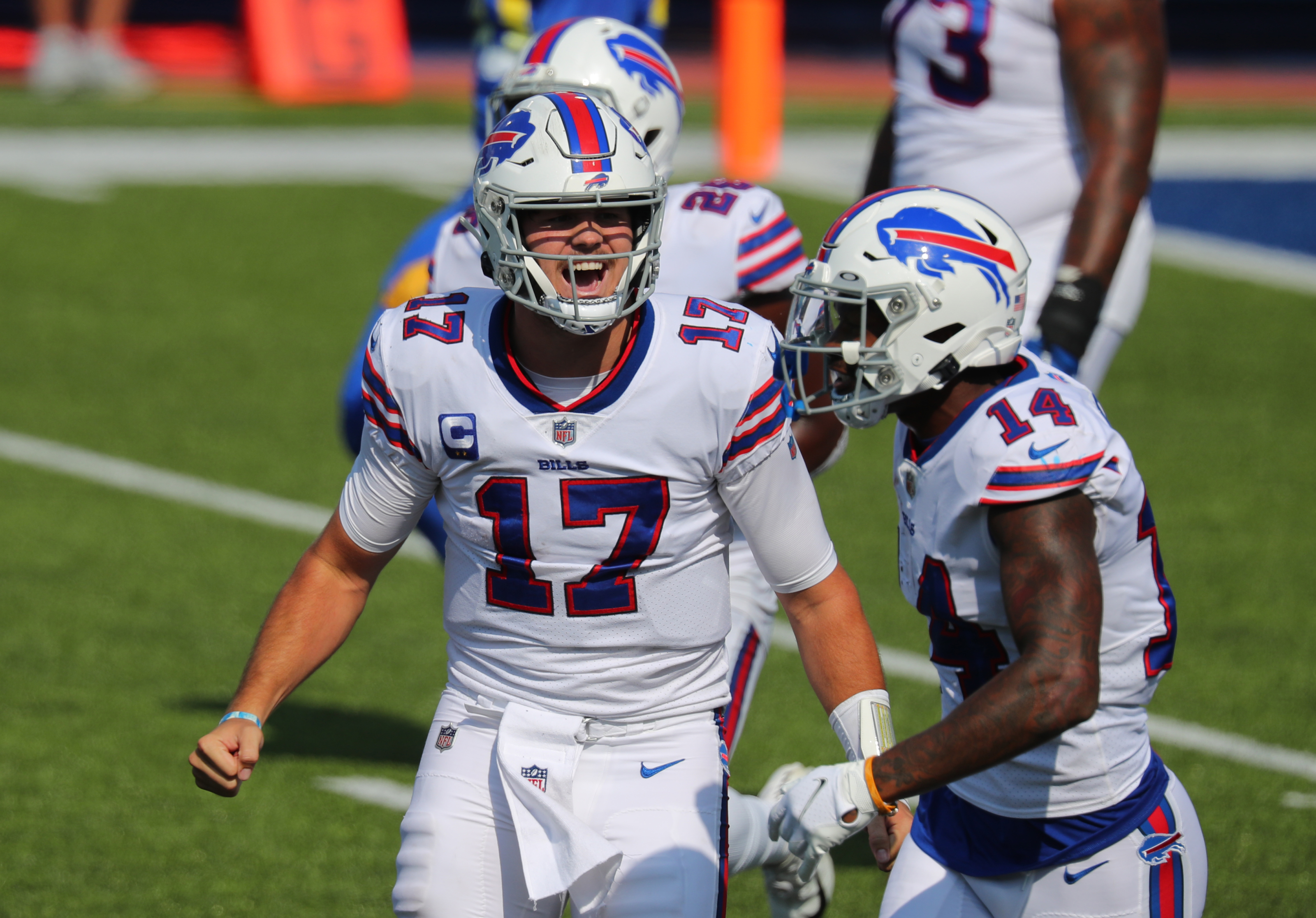 ORCHARD PARK, NY – SEPTEMBER 27: Josh Allen #17 of the Buffalo Bills celebrates his touchdown pass to Stefon Diggs #14 of the Buffalo Bills during the second half against the Los Angeles Rams at Bills Stadium on September 27, 2020 in Orchard Park, New York. Bills beat the Rams 35 to 32. (Photo by Timothy T Ludwig/Getty Images)

Continue reading below for the written breakdown:

There might not be a hotter offense in the NFL right now than the Buffalo Bills. They just put up 56 on a very good Miami defense. What’s more, John Brown is back in the lineup and can put the offense over the top. While John Brown and the Bills starters only played for the first half in their game against Miami, that was more than enough to get the Bills get up 28-6 going into the 3rd quarter. It started a little shaky but Buffalo made some good adjustments to attack the blitz-happy Dolphins.

The Dolphins love to blitz and they were giving the Bills everything they could handle early on. In the first quarter, Miami had all but shut down the Bills explosive offense. Miami has a ton of exotic pressure looks that caught the Bills in some bad protections. Miami especially likes to send their slot corners on blitzes to overload one side of the line.

Here, there’s a complete breakdown in protection for the Bills. The Dolphins are giving a two-high safety look. This allows the safety to the top of the screen to more easily cap the inside slot receiver. What that means is he is in a better position to cover for the slot corner that will be blitzing. On the snap, that slot corner blitzes off the edge and the safety comes down to the flats in Cover 3. The offensive tackle way oversets to the outside which makes him vulnerable to an inside move.

That inside move is what ends up getting the pressure, but that’s not how things were designed. The tackle needs to take a more vertical set and the running back needs to protect from the inside out to prevent exactly this scenario. Off of the play fake, Singletary sees the inside pressure, but instead, decides to let that guy have a free run at the quarterback while he goes to pick up the blitz on the outside. You always have to block interior pressure first.

The Dolphins impacted a number of throws through the beginning of the game. Miami here is using a delayed blitz from their linebacker who is looping outside the tackle. The Dolphins are again working to occupy that tackle by having the defensive end has spike inside. It takes a while to develop but impacts the throw of Josh Allen.

Miami also ran a number of amoeba looks with their whole defense standing up at the line of scrimmage. Buffalo stood up pretty well to these looks, but the Bills generally didn’t have a lot of hot reads available to Josh Allen to attack some of these blitzes.

As the game progressed, the Bills started to figure something out. A lot of the time, the Dolphins were playing a bail technique at corner on these pressures to prevent from getting beat deep. With so many moving parts in the secondary, it can be hard to diagnose what’s going on. However, if you know that the outside guys are going to be bailing and giving cushion, you can attack that space. That’s where Josh Allen began to use his hard count to flush out some of these looks. Here, he gets Miami to show that their corners are playing with that bail technique. Allen sees that, and knows that he can throw the ball on time and with the anticipation. This is a small gain but this was the start of the tide turning for the Bills.

Again, off the snap here you can see the corner walked up like he’s going to press. At the snap of the ball, he zone turns. As soon as Josh Allen reads this, he throws the quick hitch underneath it.

All that blitzing leaves your secondary vulnerable – especially with leverage in man coverage. It’s a big ask for your guys to cover when the blitz isn’t getting home. Josh Allen is one of the best in the league this year when dealing with blitzes. He torched the Seahawks when they decided to blitz him so, I’m not entirely sure why the Dolphins chose to throw the house at him, but here we are. Just by alignment here, the slot receiver has basically already won on the out route. All Josh Allen needs to confirm is that it’s man coverage on the outside and that the corner will turn his hips to the sideline to cover the receiver. After that, there’s nobody that can impact the ball and it’s an easy touchdown for the Bills.

John Brown was a little quiet in the first quarter but came alive in the last drive of the half with two huge plays. Pairing him with Stefon Diggs and Cole Beasley really puts the Bills offense over the top in the passing game. The Dolphins are again sending a slot corner blitz here but run Cover 2 behind it. The Bills have the perfect play dialed up with a Smash concept to John Brown. Smash is a corner route with a short hitch or out route underneath it. That route combination puts the Cover 2 flat defender in a bind. The blitz doesn’t get home and Allen recognizes that the corner has stayed down in the flats which opens up the window to John Brown behind him. The Bills did a really good job after the first quarter of picking up the blitzes by the Dolphins and making them pay by reading their leverage and attacking coverage deep when they got a matchup they liked.

This all culminated at the end of the first half. The Dolphins are showing zero blitz with nobody in the middle of the field and no safety help. While they do drop some guys into coverage to protect against the hot read, the Bills are using max protection with eight guys staying in to block and running a double move at the top and bottom of the screen. John Brown pushes inside like he’s going to a slant before converting to a fade. There’s nobody there to help the corner, Buffalo picks up the blitz, and the Bills score to make it 28-6.

The Buffalo Bills are firing on all cylinders right now and they’re going to be a tough team to stop. Their defense is playing better, they’re making good adjustments on offense, and Josh Allen is playing at an elite level. You throw in Stefon Diggs who is a top receiver in the league and now you add in another guy with elite speed in John Brown and the Bills are cooking in Buffalo. It’s going to be hard to slow them down and if the Bills keep rolling, we may just see them in the Super Bowl.