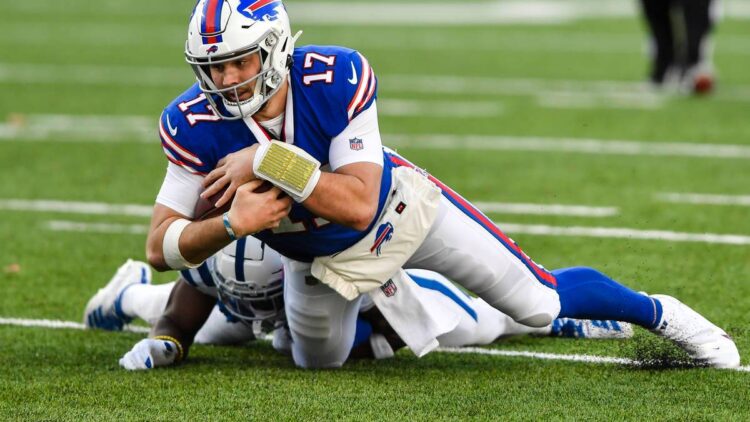 The Bills won their first playoff game since 1995 and unleashed all their weapons to knock out Frank Reich and the Indianapolis Colts. Part of their game plan included implementing a lot more designed quarterback runs for Josh Allen.

Most of the game, the Colts played with two high safeties. Part of the plan for the Bills was to attack that look by using empty formations and running Josh Allen on quarterback draws. By going empty, that removes one extra player from the box. You’ve now got the two deep safeties and five offensive linemen against five defenders in the box. The closest unblocked players that can make the tackle on Josh Allen are the safeties that are 15 yards deep.

Here you have the exact same concept, formation, and look from the Colts on defense. On this play, Allen looks to the two receiver side to sell the quick quick screen and to influence the linebacker before taking off. He gets caught up at the line of scrimmage, but the scheme worked well and there was lots of space to attack.

The Bills ran this same quarterback draw concept, but they also would motion their running back out of the backfield to run a bubble to create an RPO. If no defenders go with that motion, Allen can throw the bubble. If defenders do run with the bubble, it’s an extra piece of eye candy to pull defenders out of the middle of the field for the draw.

Like the first set of draw plays we saw though, it was a little hit or miss. The Colts were able to make some really nice plays in the interior to prevent Allen from getting up to the second level of the defense.

The Bills also called zone reads a number of times but Allen only kept it once. Allen is reading the defensive end. As the defensive end crashes inside, Allen takes the ball outside. The fake to the running back pulls everyone but the safety which leaves Josh Allen one-on-one for the touchdown.

The Bills have had some really good game plans the last few weeks and have found ways to create space for their best players. With the threat of Allen on designed quarterback runs, they’re going to be even more difficult to stop. If the offense keeps playing like they are, the Bills’ magical season might continue into February.