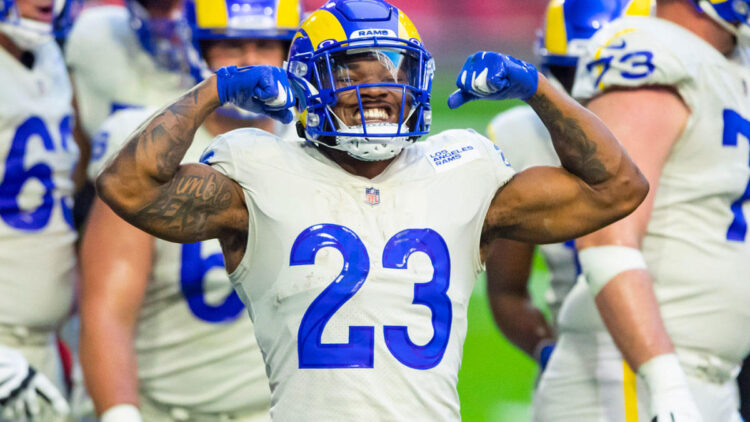 The Rams pulled off the upset against the Seahawks. While a lot of it was due to their dominating defense, the Rams’ run game also played a huge part in their win. Los Angeles racked up 164 yards on the ground which is their second highest total since Week 3 against Buffalo. Getting Andrew Whitworth back and having Cam Akers fully healthy certainly helped. Let’s look at how the Rams’ outside zone functions and what can make it so effective.

How outside zone works

Outside zone always has the goal of getting on the edge. In reality, it’s pretty rare to be able to hook the contain defender and get outside. Most of the time, the ball ends up between the tackles. Within the goal of getting outside, you can create a lot of horizontal flow from the linebackers which opens up lanes for the running back. As a result, the blocks on the backside of outside zone are equally as important as the play-side blocks.

To the play-side, the linemen and in-line tight ends are coached to take a horizontal replacement step and lose ground on that first step if needed. The priority is to scoop and get a good surface on the defensive linemen. If lineman is uncovered, which means that no defensive linemen are lined up over you, you take three steps on your horizontal track before climbing to the next level.

Penetration can kill outside zone so you have to stay on your track to prevent any inside spikes or stunts by the defensive line. You can see a great example of that here with the right guard Austin Corbett. Corbett takes three steps down the line on his track before turning up-field and helping his center.

Those backside blocks meanwhile have to prevent penetration. They need to stop the defensive linemen and linebackers from chasing down the line of scrimmage. Even if that just means walling off, that’s what they’ve got to do. Whitworth is able to get just enough of KJ Wright on the backside to wash him downfield a little and prevent a strong pursuit. All of this allows for Cam Akers to push to the edge and read the defensive linemen. If they have leverage outside, he shifts his aiming point one defender inside until a lane appears. He reads that the outside is sealed and cuts up-field between his guard and tackle.

Here is an example of the defensive line spiking inside. This is why you have to stay on your track if you’re an offensive lineman. The nose tackle for Seattle shoots backside of the play to the right. Because Corbett, the right guard, is on his track, he’s able to hook and seal him. Helping that cause is also the right tackle, Rob Havenstein. By also being on his track, he helps prevent penetration simply by occupying that space. Akers again reads that his blocks outside are sealed and cuts up-field.

By creating all this horizontal flow, the Rams now start influencing the linebackers. With the running back aiming to get outside, the defense has to respect that threat. As the line works to wash people down and climb vertically, it can really stress the gaps of the linebackers. That’s when the cutback lanes really start to open up.

This is a perfect example of how strong that flow can look for a linebacker. As Malcolm Brown presses to the play-side and the offensive line takes its track, the linebackers also start to commit and flow to that side. If they don’t, they’ll start to get walled off by climbing offensive linemen. However, if they flow too hard, they’re now going to be out of position to track cutbacks the other way. Bobby Wagner is still able to disengage from the block and make this play, but not until the Rams have already gained six yards on the run.

The cutback on outside zone is what makes it so deadly. If your linemen are playing well like the Rams were on Wild Card Weekend, the linebackers are put in a very difficult position. Cam Akers presses the play-side perfectly here before cutting as soon as the linebacker starts to fill. That leaves nobody to plug the gap down the middle of the field and it’s a walk-in touchdown.

When you throw in some of Sean McVay’s motion, it makes life very difficult on the defense. The Rams here use both a rocket motion from one receiver pre-snap and then crunch another receiver across the formation post-snap in the opposite direction. That rocket motion shifts the linebackers over one gap to the outside. This gives the entire offensive line better angles to seal them off. By taking their steps and tracks, the Rams get a really nice double team with their left guard and center. That double team moves the nose up to the second level and creates space for Cam Akers to attack.

The Rams ran that rocket and crunch backfield action multiple times through the game and it held defenders on both sides. Defenders bump with the pre-snap motion and then coverage and run support defenders pause because they see an eligible receiver coming at them with the crunch action post-snap. It’s really simple stuff that opens up lanes for the running attack. Cam Akers showed really good decisiveness and explosiveness reading these lanes all day.

Robert Woods’ utility as a blocker

To top things off, having a receiver like Robert Woods who’s able to wall off defensive linemen and prevent them from crashing down on the play is also a huge help to the run game. The Rams have a real luxury with Woods by cutting his split in tight and being able to put in front of a guy that outweighs him by 50 or more pounds. Even if his guy does make the tackle, they won’t beat him off the line and he’s going to make them work to get there.

The Rams have a formula that’s working. Run the ball and play elite defense. Andrew Whitworth returning to the lineup helped solidify things up front and Cam Akers is playing much more decisively. The offensive line is playing as a complete unit and when they’re clicking, the entire offense starts to work. They have a big test against the Packers in the Divisional round but they have a formula that can win in cold weather and that can travel across the country. If their defense keeps playing at an elite level and they can control the clock and sustain drives on the ground, we may be seeing the Rams right back in the Super Bowl.