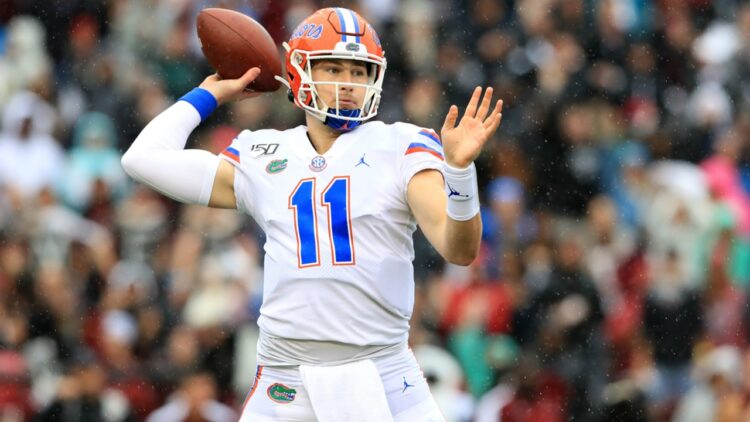 The Kyle Trask scouting report is an interesting one. From a statistical standpoint, very few quarterbacks had a better season than Florida’s Trask. After a solid, but unspectacular season in 2019, Trask exploded for 43 touchdowns in 2020. He had the luxury of exceptional play-calling and an offense full of NFL-quality talent this past season which surely helped his stats. Had Florida not lost close games to Texas A&M and LSU, we would have likely seen Trask named as the Heisman Trophy winner. He’s an interesting prospect in the sense that he’s already 23 years old and has only two years as a starter in his career. That’s right, he didn’t start a game until he was in college. In high school he sat behind Miami’s D’Eriq King as a prep athlete. Trask is an underdog and a guy you can’t help but root for. Trask could see himself get drafted as early as the first round with a strong pre-draft process.

Positives from his time at Florida

In terms of putting the ball where it needs to be, Trask is one of the best in this class. Of course, he had the fortune of throwing to very talented players, but Trask showed a lot of improvement this season in ball placement. He was more aggressive and successful in throwing into tight windows. He was at his best working the middle of the field to his favorite target and probable first-round pick, Kyle Pitts. To me, his accuracy is what he improved upon most this year. In the past, he looked timid and afraid to trust his arm, but this year he took the next step and displayed pinpoint precision en route to a historic season.

While he doesn’t possess great arm strength, Trask helps make up for it which great touch on throws. He knows how much air to get under the ball in order for his guy to get underneath it while in stride. Dan Mullen’s offense does a great job of exploiting mismatches. Trask did a great job of identifying this and getting the ball out. The Gators offense had plenty of speed, so Trask got in a good habit of lofting the ball high and far enough to ensure his guys were able to make the play.

At 6-5 and 240 pounds, Trask has the prototypical size for a quarterback. With his build, he can take hits and has the physical tools that teams desire. Sure, the league doesn’t abide by size thresholds they once did, but they’ll always prefer the sturdier option. Also, despite being a fifth-year senior, Trask is still a relatively raw player. He didn’t start in high school and it took three years for him to start in college. While he’s older than most prospects, he’s still a developing talent. Any team thinking that he’s only scratched the surface of his talent will have him higher on their boards.

Too often Trask missed guys because of overthrowing them. One might think it’s because his arm is too strong, but in my opinion, it was because of his poor mechanics. His footwork needs some help, but teams will recognize that he’s a work in progress. In the NFL, quarterbacks can’t miss the throws they should be making and if Trask wants to be a starter then he must clean this up.

It’s not that Trask is a bad athlete, it’s just that his feet are clunky and a mess. When he’s running straight, he can make some short-yardage plays due to his size, but he can’t move laterally in the pocket at all. In college, his offensive line did a good enough job to give him time, but in the NFL you can’t count on your offensive line slowing down opponents week in and week out. Also due to his lack of footwork, he overthrows receivers as I mentioned previously.

Fifteen interceptions over two seasons isn’t a lot, but this total doesn’t match up to his decision making. He had a tendency to stare down his receivers and throw into double or triple coverage. Mistakes like this are expected from a quarterback who hasn’t played many snaps, but something you don’t want in a possible first-round quarterback.

Trask has definitely helped his stock during this season, but there are still plenty of questions. Will a team trust him to be their franchise quarterback or is he seen as a dependable, but uninspiring option? The answer to that question will determine if he’s a first-round lock or a day two selection. I think he’ll fit best in a west coast, rhythm-based offense that won’t ask him to do too much. Teams like the Saints, Colts, and the Patriots will all be in need of a young quarterback and I think their systems would maximize Trask’s potential.