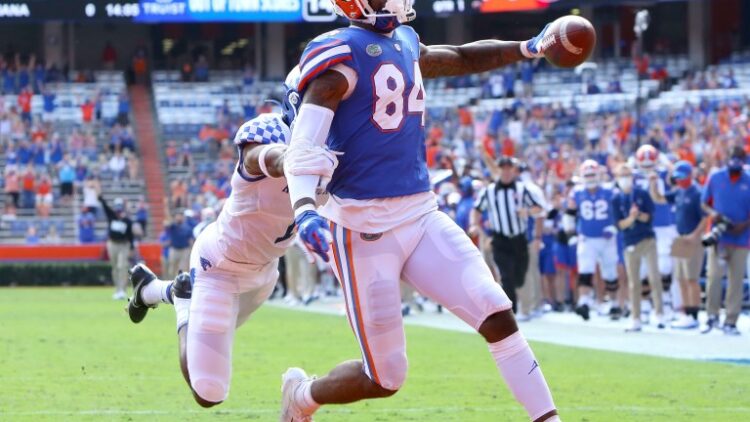 The Kyle Pitts scouting report is an exciting one if your team is in need of a pass-catching tight end. Pitts, who won the Mackey Award, was the top target in Florida’s high-scoring offense and figures to be a very early selection in the 2021 NFL draft. He is the type of tight end we are seeing more and more in the league. A tight end that is utilized more as a receiver than as a blocker. In a draft class that is deep with pass-catching talent, Pitts stands out as a big-bodied weapon that any offensive coordinator will drool over.

Positives and highlights from 2020

In terms of route running for a tight end, Pitts is the best I’ve seen at the college level. It shouldn’t be too shocking due to the fact he’s utilized mostly as a big receiver, but he’s able to get open against anyone who lines up across from him. He’s lethal on slant routes and leaves defenders in the dust. Whether he’s lined up out wide or in a more traditional tight end spot, Pitts finds a way to get open in man or zone coverage. That’s tough to find in a college tight end.

Many receivers and tight ends can beat coverage, but not all of them can consistently catch the football. For example, New York Giants tight end Evan Engram has all of the measurables and ability to get open, but couldn’t catch a cold in an igloo. While that may get you an undeserved Pro Bowl nomination, it will never make you an elite player. From the games I watched, I didn’t see Pitts drop any passes and saw him hold on to the ball despite taking big hits. His concentration is elite and he typically catches the ball with his hands rather than letting the ball hit his chest.

While I do think he needs to bulk up a little bit (more on that later), at 6-6 Pitts is a massive target. He has some Mike Evans in him in the sense that any 50-50 ball you throw his way becomes an 80-20 ball in his favor. He is a dependable red zone presence. Pitts excels at fades and boxing his defender out like a power forward in basketball. Any quarterback, particularly a young one still working on their accuracy, benefits from bigger targets who can make tough catches. We saw this happen with the Carolina Panthers when Cam Newton was in his prime and winning MVP’s. They saw Cam’s weakness was his accuracy, so they had almost exclusively big targets to help him. That ended up working out quite well for them.

I want to make this very clear, I do not think Pitts is a bad blocker. In fact, he did much better than I expected him to and has the effort to be a good blocker (most of the time). However, if you want him to be a consistent blocker in the NFL, he needs to get bigger and stronger. A 6-6 240 pound tight end just simply won’t be able to block defensive ends who have 20-30 pounds of muscle advantage. If he’s going to be a purely receiving tight end, then it’s not a concern. It would be wise to use him as an “F” tight end where he lines up everywhere. Just don’t expect him to be used like George Kittle, a guy who is as good of a blocker as he is a receiver.

This isn’t really a negative as it’s more of a fact. If the team that drafts Pitts wants to call him a receiver, it shouldn’t surprise anyone. I expect he’ll be quite low on the board for some teams and a top-five talent for others.

To be honest, I didn’t expect to like Kyle Pitts as much as I did. He’s a perfect fit for today’s NFL as a mismatch nightmare and is a guy every defensive coordinator has to game plan around. The pro comparison for him is Darren Waller and it’s one of the easiest comparisons to make. I think Waller is faster than Pitts, but both can get open in several ways. Pitts can get drafted anywhere from pick five to pick 15, with the Patriots, Giants, and Chargers being teams that could be interested in his services.