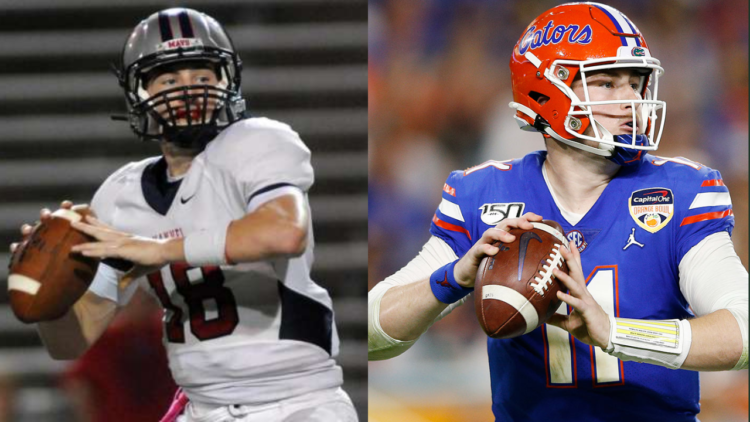 Just a few years ago Kyle Trask was a backup quarterback his senior year of high school. Now, he’s getting buzz about being a first round draft pick in the NFL. At Manvel High School in Texas, Trask backed up D’Eriq King. King wasn’t just some guy, though. D’Eriq is now playing at the University of Miami and broke many quarterback records in Texas during his high school career.

While Trask was never the fulltime starter at Manvel High School, he did get some meaningful playing time. Trask threw for over 1,000 yards and 12 touchdowns his senior year according to his coach Kirk Martin.

Despite only getting spot duty through his high school career, Trask showed a knack for the quarterback position from a young age. Even as a 7th grader, he would come to Manvel High School and watch the quarterbacks work. One of the things that stood out to his high school coach was his intelligence and mind for the game. The work ethic was always there. As an honor student and an Eagle scout, there was never any doubt that Trask could digest all of the information that a quarterback needs to. He just needed an opportunity.

While he was proving to his his high school coaches that he had the drive and the mind the play quarterback, Trask was also showing some of his patented touch and accuracy downfield. At 6’5” and 211 pounds as a senior, he was already a prototypical NFL quarterback at the age of 18. Despite all of this, his lack of playing time hurt his college opportunities. Only four schools offered him coming out of high school: Houston Baptist, Lamar, McNeese State, and Florida.

Kyle Trask at Florida and his injury issues

After earning a three-star rating and red shirting as a freshman, Trask was set to compete with Feleipe Franks for the starting job at Florida. However, Trask needed surgery to repair a torn meniscus in the Spring of 2017. Soon after, he then had separate surgery on his foot days before the season opener. With Trask missing so much practice time, the starting job went to Feleipe Franks. In week nine of his redshirt sophomore season, Trask came in for an injured Franks when playing Missouri. He threw for 126 yards and a touchdown in one half of football and the quarterback competition was back on. Unfortunately for Trask, just a few days after getting back onto the field, he had a season ending knee injury at practice. His 2018 season had come to an end.

After battling through the injuries of 2018 and another quarterback competition with Franks, Trask finally became the fulltime starter for the Gators in 2019. The first game of the 2019 season, he made his first start since his freshman year of high school. That season he threw for 2,941 yards, 25 touchdowns, and seven interceptions.

Kyle Trask followed up a solid performance in 2019 with an absolutely stellar 2020. This past season he threw for 4,283 passing yards, 43 touchdowns, and eight interceptions.

Kyle Trask’s fantastic 2020 season eventually had him in the Heisman conversation. Going into the tenth game of the season against LSU, Trask had the Gators at 8-1 and ranked #6 in the nation with their eyes on an SEC Title. While Trask made some nice throws and lost a close game 37-34, Trask’s two interceptions ultimately doomed the Gators and his Heisman hopes. He ended up being second team All-SEC, a Heisman Trophy finalist, and the passing touchdowns leader in all of the FBS. Without surprise losses against Texas A&M and LSU, Trask would have had a really good argument to be the Heisman trophy winner. Instead, the award went to Devonta Smith.

Headed to the NFL

People are divided on Trask as an NFL prospect, but he clearly belongs and deserves a shot. It’s important to remember that Trask, who will be 23 years old at the start of the NFL season, is still somewhat of a raw prospect with not much starting experience under his belt. The NFL team that takes him will get his excellent work ethic, a guy who has been through adversity, and who has repeatedly proven the doubters wrong.