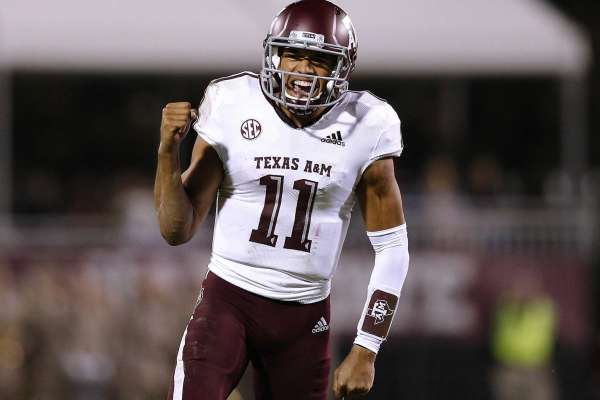 The Kellen Mond scouting report is a mixed bag. Mond, a four-year starter at quarterback, saved his best for last as he helped guide Texas A&M to a #4 ranking at the end of the season. Mond was a highly-touted prospect who never quite lived up to the hype, but provided steady play for most of his career. Known more of a runner than a passer early in his in his time at A&M, he did what promising quarterbacks do and improved each and every season. While this is a deep quarterback class, Mond has a ton of game experience and has the tools needed to make an NFL roster.

Mond is a tough as nails quarterback who will stay in the pocket as long as he can. To me, this shows his experience as a four year starter. He understands it may take time for his receivers to get open. Instead of trying to scramble like most mobile quarterbacks, Mond doesn’t mind taking a hit and still delivering the ball in time. This is my favorite quality about Mond and this is a skill that will translate well in the NFL.

While he doesn’t possess a rocket for an arm, Mond has the ability to put nice touch on throws down the field. While Texas A&M doesn’t take many deep chances, when they did, they had some success. Their offense was catered to run the ball and run play action off of that, so once or twice a game they would try to catch the defense off guard by taking a shot for a big play. Mond was able to get enough air under the ball, giving his receivers a chance to get underneath.

A majority of quarterbacks nowadays need to show some sort of mobility, which fits right into Mond’s game. Earlier in his career, Mond was much more of a runner and looked to run first and pass second. This season, though, he flipped that. Mond still showed the running ability that will make him an attractive option in the middle rounds. He’s a patient runner and never forces something that isn’t there. Also, he does an excellent job of reading defenders on option plays and knowing when to hold on or when to pitch it.

Staring down one receiver won’t get you much playing time in the NFL. Mond doesn’t go through his progressions like most of the other quarterbacks in this class and stares down his first read. This is very dangerous as defenders sitting in zone coverage can just read his eyes and jump routes. I’m not sure if it’s just the Texas A&M offense or if it was Mond. Either case, it puts Mond behind the eight ball and doesn’t make him someone you can realistically start in his first or second year.

While I praised Mond’s ability to throw down the field earlier, his overall arm strength is below average. He lacks the zip needed to make throws consistently across the field from the pocket. Also, he has a tendency to underthrow open receivers out on the perimeter, typically leaving the ball short.

Mond did make a lot of progress as a passer each and every year he started, but he still leaves a lot to be desired in terms of accuracy. He’ll make some questionable decisions, thinking he can fit the ball into a window that he doesn’t have the skill to thread it in. Other times he will have receivers open and miss them by a wide margin.

I don’t think Mond will ever become a full-time starter at the NFL level, but he has the skillset to continue to develop and possibly one day take that next step. At worst, he’s a very good back up whose athleticism can make him a weapon in the red zone. Quarterbacks tend to get over-drafted so I wouldn’t be shocked to see Mond as a day two selection. Should a team allow Mond to sit for a season or two and develop, I can legitimately see Mond getting a chance to start based on the skillset he has.